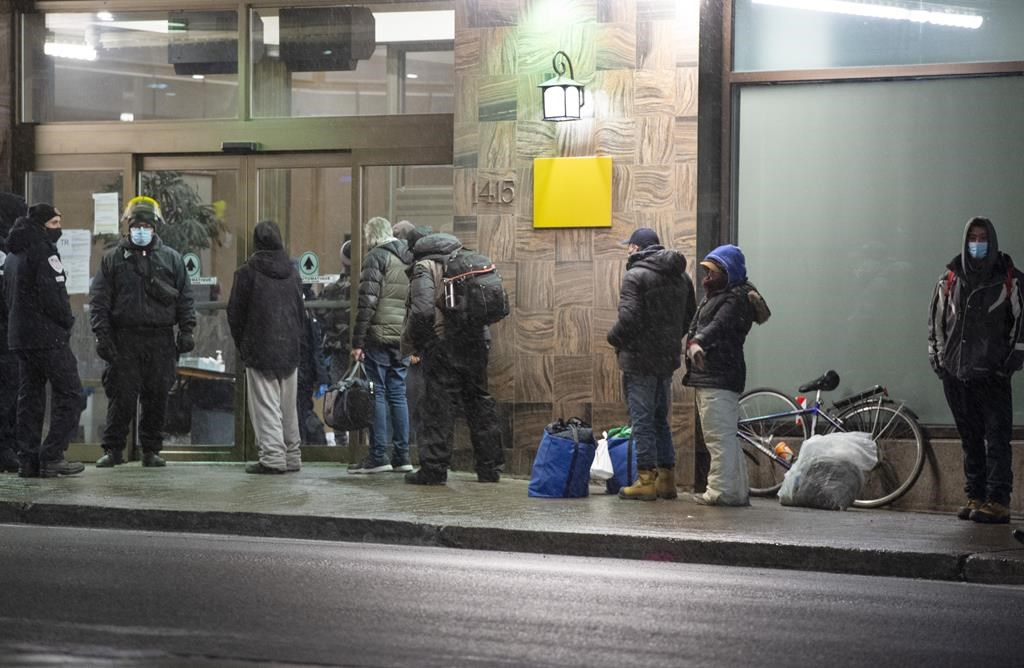 People lineup at a hotel for the homeless before the 8 p.m. COVID-19 curfew on Jan. 11, 2021, in Montreal. File photo by The Canadian Press/Ryan Remiorz
Previous story
Next story

Quebec Premier Francois Legault says he won't grant a curfew exemption for Montreal's homeless population, telling reporters Tuesday he has confidence that police will use their good judgment in dealing with cases.

Legault told reporters during a COVID-19 briefing in Montreal that altering the government's decree to exclude the homeless from the provincial curfew would be used as a loophole by others to flout the measure.

Montreal's mayor had made the formal request just an hour earlier, calling on Quebec to relax the COVID-19 measure on the city's most vulnerable population.

"What I'm say is right now, the police are doing a very good job. They use their judgment," Legault said. "If we change the rules and say that you can't give a ticket to someone who is saying they're homeless, you may have some people that will pretend to be homeless."

Mayor Valerie Plante's appeal followed the weekend death of Raphael "Napa" Andre, a 51-year-old Innu man found dead in a portable toilet not far from a shelter he frequented. Andre often spent time at a day centre for the homeless called The Open Door, which was forced to close its overnight service last month following a COVID-19 outbreak.

He visited the centre Saturday evening and was found dead Sunday morning, not far from the shelter, which had to send him out at 9:30 p.m.

The coroner is investigating Andre's death.

Plante said there's evidence the curfew is causing problems for the homeless and those who work with them. "What we've been seeing in the past week is that it created a lot of stress — not only for the homeless population itself but also the workers," Plante told reporters outside Montreal City Hall.

"The curfew just adds to that and creates a sense of insecurity for a lot of users and we don't want that.... I want people to feel safe in the streets."

Plante says the 8 p.m. to 5 a.m. curfew — which began Jan. 9 and is scheduled to last at least until Feb. 8 — is creating an untenable situation for the city's most vulnerable.

The mayor says on most nights the city's overnight shelters are at least 95 per cent full. While she wants the rules relaxed to relieve the pressure, she doesn't want people sleeping on the street.

Plante said a 100-bed facility is set to open in the coming days. Legault said the province has added 800 beds and it stands ready to add more as needed.