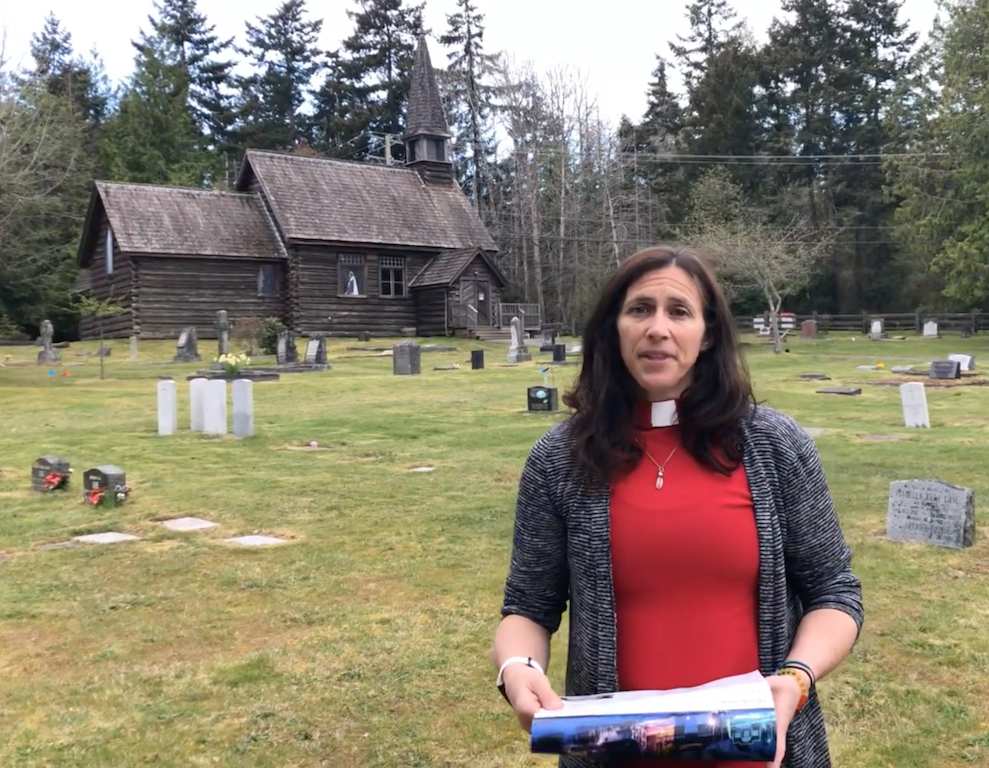 Rev. Christine Muise with OHEART, a group of churches hoping to establish an emergency shelter in the Parksville and Qualicum Beach region, says people don't have anywhere warm to go. Screengrab courtesy of OHEART
Previous story
Next story

Environment Canada issued sweeping alerts for Vancouver Island this week predicting the coldest weather of the year as arctic air and frigid temperatures descend along its east coast.

Yet the homeless in Parksville and Qualicum Beach have nowhere to seek warmth from the deep freeze after the region’s only cold weather shelter was closed last March.

Rev. Christine Muise of OHEART — a coalition of nine churches in the region that ran the shelter — has been advocating for a solution for close to a year after the shelter at St. Anne’s church had to close because the facility was inadequate to meet COVID-19 concerns.

Folks living rough in the region have endured the cold for most of the winter, but the latest temperature drops put people at even greater risk, Muise said.

“If I had the capacity to just simply open my hall, I would, just because it's so darn cold,” Muise said.

“I just hate this weather … there are humans trying to survive it and it’s just not kind.”

There are 16 temporary beds at a Parksville hotel with assistance from BC Housing to shelter vulnerable individuals and prevent the spread of COVID-19, said Muise.

However, demand for the beds far outweighs what’s available, and the beds set up during the pandemic are also not a permanent solution for the region, she said.

A total of 44 people have sought shelter at the hotel for various stretches of time, and close to double that number are on OHEART’s list as seeking permanent shelter, Muise said.

Additionally, the hotel beds are more appropriate for people who aren’t facing significant mental health or substance use issues, she said.

A low-barrier shelter paired with overdose prevention services to address the toxicity of the illicit drug supply that is killing people in record numbers in B.C. would be the best means of establishing a point of contact to help vulnerable individuals, Muise said.

“But without the proper support in place to actually help people be successful, and to give them the resources where they can make other choices, it's pretty hard,” she said.

Homelessness in the region made headlines in November after three people were killed near Whiskey Creek, one of the numerous homeless encampments surrounding the two municipalities.

Some people seeking refuge in the rural camps are likely there to avoid being moved along on a regular basis by bylaw officers in the municipal boundaries, Muise said.

“We are losing a tremendous number of people to the opiate crisis and now we’re seeing a surge with COVID-19,” she said

“Plus, there’s a housing crisis on top of it.”

A homeless shelter in the region was originally on the books as part of Orca Place, a subsidized housing project in Parksville that opened in 2019.

But the shelter component of the project was nixed after the City of Parksville shelled out close to $1.2 million to buy the property and to repay a grant-in-aid from the Regional District of Nanaimo.

The purchase followed a lawsuit launched by opponents of the housing project and a 2018 municipal election where the housing project was a divisive issue. Adam Fras and Doug O’Brien, current members of Parksville city council, were part of the lawsuit against the project.

“Cold weather shelters are the responsibility of the province, not the municipality,” Mayne said Wednesday, adding BC Housing made a commitment two years ago to provide such a shelter in the region.

“BC Housing said they were going to arrange it with the churches and all the other groups that are involved in all of this, and they couldn't come up with an arrangement,” Mayne added, saying he believed some area churches have adequate facilities for a homeless shelter.

Pointing to the 57 units at Orca Place and the 15 temporary COVID-19 shelter beds, Parksville has already made a contribution to dealing with homelessness, Mayne said.

The homeless in the rural camps surrounding Parksville were the responsibility of the regional district and many of those without housing in the region don’t come from the community, he added.

The city’s tax base is insufficient to tackle the breadth of the homelessness issue, which is aggravated by senior levels of government not adequately dealing with mental health and substance use issues, Mayne said. There is insufficient treatment, support programming, care and housing for what is essentially a health, rather than a housing, problem, he said.

“So that can be handled much easier than what we were trying to do where we kind of put a Band-Aid on an axe cut.”

Mayne declined to say if the city was supportive of the idea of an emergency shelter in Parksville.

He observed the city probably wouldn’t provide funding, but that churches get tax exemptions for services such as helping the homeless.

As far as rezoning to permit an emergency shelter, every application is considered individually, he said.

Violet Hayes, co-chair of the region’s task force on homelessness and the executive director of Island Crisis Care Society, which runs Orca Place, said having no emergency shelter in the region was worrying.

“If you think about the weather, I’m sitting here right now and it's snowing and there is nowhere warm for people to go.”

The task force has been working with its partners for a number of years to find a solution, she said.

Hayes agreed there was more the province could do, but a cold weather shelter is a piece of the puzzle to addressing homelessness, she said.

“It’s not the whole solution, but it’s part of the solution,” she said.

“It’s an entry point for people in getting support.”

Finding a location has been the biggest challenge in putting a shelter in Oceanside, the region that includes Parksville and Qualicum Beach and other smaller communities south of Nanaimo and north towards Courtenay.

A past solution of rotating a cold weather shelter among the region’s churches didn’t work well because clients found it confusing, she said, adding it was also a big ask for a church to give up space it uses for a congregation’s activities.

However, few properties in Parksville have the appropriate zoning for a shelter other than Orca Place, she said.

“It really comes down to zoning, and the willingness of the municipality to work with you around a location,” Hayes said.

“So, we are working to get something in Qualicum Beach.”

Qualicum Beach Coun. Scott Harrison said council passed a resolution at its last meeting to identify a location for a temporary warming centre or cold weather shelter for up to 15 people.

News around a potential site is likely to become public in the next two weeks, he said.

However, it’s too early to say when such a facility would be operational, he said.

“Obviously, sooner would be better and it is cold weather right now, and operating a warming centre in early June doesn’t really help people we need to help,” Harrison said.

“If someone were to say, 'We could have done this sooner,' I would say that's correct. I think that's a fair critique.”

Homelessness in the region is driven by high housing costs that are more in line with bigger cities on Vancouver Island without comparable economic opportunities, he said.

It’s hard to pinpoint exactly how many people are homeless in the region, but Harrison said given the length of wait lists for supportive housing in the region, it’s likely quite high.

Finding a location for a temporary facility is a first step in a region where historically there hasn’t been any offer of land from local government for cold weather shelters, he said.

“I think to some extent, there's been a little bit of waiting for someone to take the first step and … hopefully, this will at least start the process,” Harrison said.

Now the goal is to have conversations with BC Housing and local service providers as quickly as possible to discuss the operational parameters of the facility, he added.

“At least now there's one missing link that's finally there, so now we can do that.”