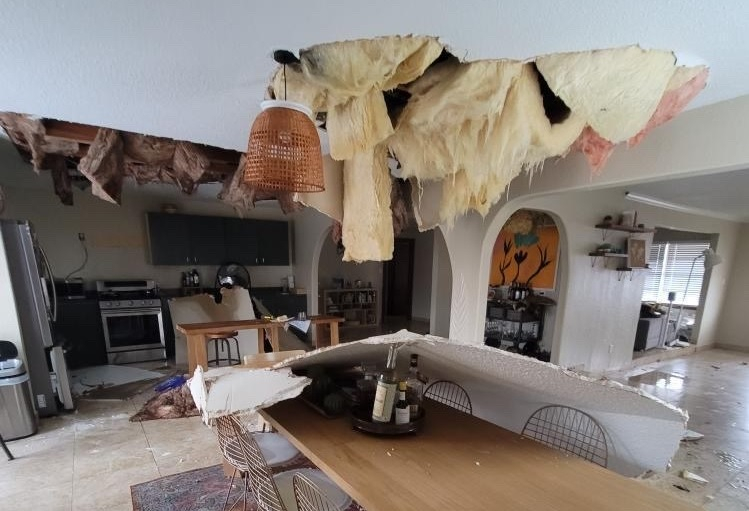 A photo posted by the City of Houston's Office of Emergency Management on Thursday shows the damage from burst water pipes following a freeze. Photo from City of Houston
Previous story
Next story

The frigid disaster unfolding in Texas is being seen as a warning to urgently assess the resilience of key systems like electricity to the risks posed by the climate crisis.

Power was partially restored Thursday in Texas following a winter storm that has killed 40 people and has stranded millions in the state without electricity or clean drinking water. The cold air spilling into the U.S. South came as a result of a jet stream that has been altered by climate change's heating of the Arctic.

The failure of the Texas electrical grid was due in part to the fact the state has not winterized its power facilities, despite a stark warning to do so after a blackout in 2011. While some politicians falsely blamed frozen wind turbines for the failure, about half of all electricity generation in Texas comes from natural gas, and the Electric Reliability Council of Texas has confirmed that gas providers were the primary reason for the blackouts.

As the climate emergency worsens, critical infrastructure will be faced with more extreme weather events, with little historical parallel. Experts say operators in Canada should be going through a self-examination process now of vulnerabilities to climate change and extreme weather.

“There’s a need for people to do those kinds of assessments of the infrastructure in light of the changing reality,” said Aaron Cosbey, senior associate at the International Institute for Sustainable Development who works on climate change and energy issues.

“The broader lesson for Canada is that (climate) adaptation is now front and centre. And that’s not a lesson just for the power sector, it’s a lesson for all infrastructure, whether it be roads, sewers, flood prevention,” he said.

“We’ve got to build that infrastructure to a higher standard than what we would have done had climate change not been a reality ... it’s a standard message, and it’s playing out in Texas.”

Canada’s electricity transmission and distribution lines face a range of climate-related vulnerabilities, from floods, fires and wind storms to ice loads and thawing permafrost, according to research compiled by the Intact Centre on Climate Adaptation at the University of Waterloo.

Canada’s electricity systems face a range of climate-related vulnerabilities, from floods, fires and wind storms to ice loads and thawing permafrost. The frigid disaster unfolding in Texas is being seen as a warning to urgently assess its resilience.

Blair Feltmate, a professor and head of the Intact Centre, said the centre brought together more than a dozen people with decades of experience from Canada's transmission and distribution sector and had them identify the top issues with each risk, as well as important mitigation measures.

The results are compiled in the 2020 report, Factoring climate risk into financial valuation. With flooding, for example, the key climate risk was that water levels climb to the point where electrical clearances aren’t high enough, and it presents a public safety hazard.

Fire along the corridors where transmission lines run can result in arcing or outages if trees are touching the line and vegetation is not cleared, the report added. Wind storms can bring down transmission lines or blow tree branches onto them, while lines or structures can fail under heavy ice, and transmission towers can shift under thawing permafrost.

The mitigation strategies for these risks involve upgrading infrastructure, clearing vegetation, carrying out patrols or other inspections of equipment, and installing visual monitors like cameras. Feltmate said operators should be thinking about what measures they can put in place.

The Houston area is under a winter storm warning. We thank our essential employees who are working at @HoustonOEM during the Level One full activation to keep an eye on the weather overnight and keep Houston safe! pic.twitter.com/KzQMdyjRQV

“When we talk about climate change, it is still the situation that probably 80 to 90 per cent of the discussion in the country focuses on how to mitigate greenhouse gas emissions, but still relatively little effort is being directed towards adapting to the extreme weather risk that’s on the ground now, and the greater risk that’s coming,” he said.

“(Climate) adaptation is the cousin nobody talks about. But you ignore it at your own peril — and that’s exactly what’s happening in the southern United States right now.”

Another possibility for Canada is to bolster its electricity interconnections. Texas has almost entirely cut itself off from the large interconnection systems spread across the western and eastern United States; the state intentionally has not built these interconnections, said Cosbey, which limits its ability to import electricity from other states in an emergency.

The federal government’s updated climate plan, released late 2020, says it expects to work with provinces and territories to advance “strategic intertie projects,” with the goal of linking the parts of Canada with non-emitting hydroelectricity to other parts that depend on fossil fuels for electricity generation.

One issue is that a lot of the infrastructure that may need to be upgraded falls under the jurisdiction of municipalities, which may not be able to pay for expensive retrofitting.

Municipalities, for example, might rely on a 12-inch stormwater pipe, said Cosbey, that is sufficient for normal circumstances, but might consider upgrading to a wider pipe to withstand the increased frequency of intense rainstorms that climate change is expected to bring.

But Cosbey said the costs of reacting to the kind of event that is happening in Texas is much more than the costs of preventing the damage in the first place.

“Adaptation is always cheaper,” he said.

Too little, too late is what

Too little, too late is what seems to happen over and over. Politicians, elected on short cycles and fearing raising taxes that would cost them votes, creates a deadlock on progress to address these infrastructure issues. Climate mitigation plans are part of Green thinking - it's not just the future that needs addressing but the now. The equity issues here are foremost - the poorest people are affected first and hardest hit. Until we can convince voters to elect people who have reality firmly in their grasp, we will suffer.

Please be careful making definitive claims that climate change caused the polar vortex to spill down. Even the article that you linked is more cautious - it says in part

There is no consensus among scientists over the interaction between Arctic heat and cold weather further south — Francis calls the topic an “active area of research.”