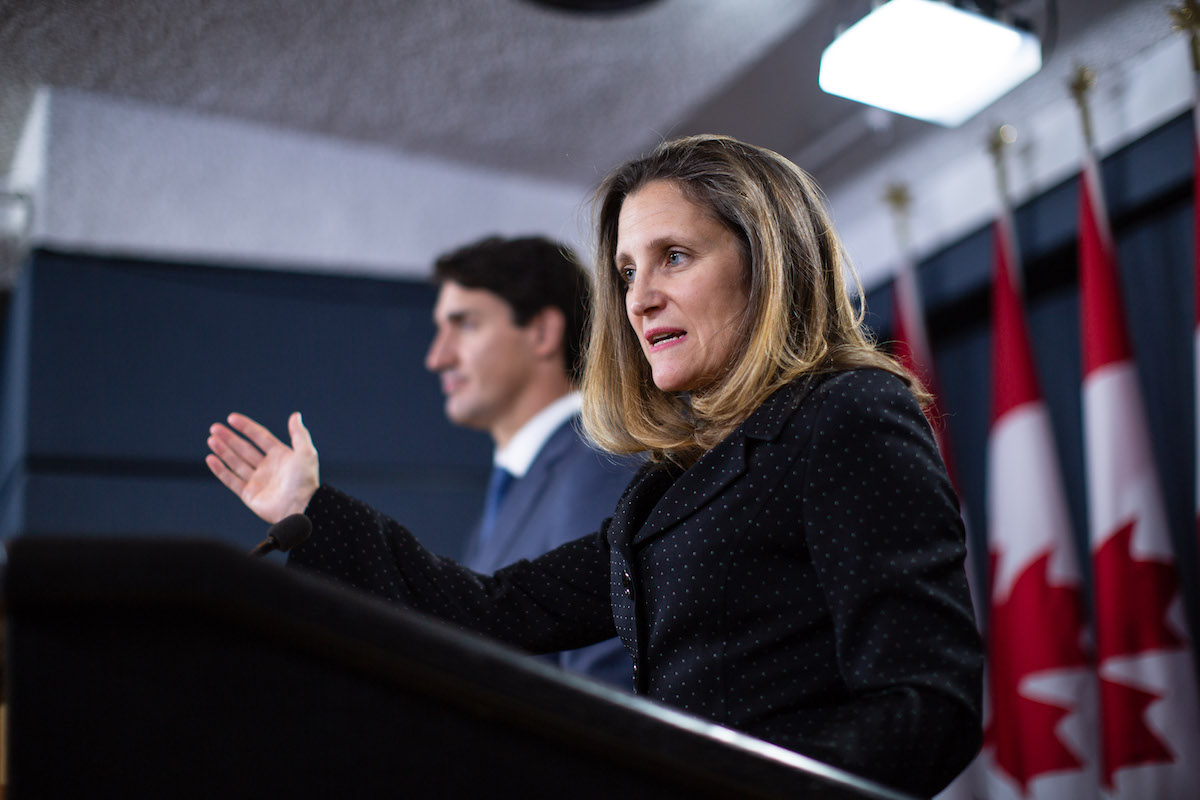 OTTAWA — The federal government will release a highly anticipated budget in about four weeks, giving Canadians a detailed accounting of pandemic spending and how the Liberals plan to spend billions more on the road out of COVID-19.

It will be the first federal budget in more than two years, after the government opted not to introduce one in 2020 as the COVID-19 pandemic took hold in Canada.

It will also be Freeland’s first budget as finance minister; she took on the portfolio last summer following Bill Morneau’s resignation.

Freeland said the government went into the pandemic with strong finances, which allowed it to provide unprecedented support to Canadians.

"We will continue to do whatever it takes to support Canadians and Canadian businesses," Freeland told the House of Commons Tuesday.

"And we have a plan for jobs and robust growth."

The budget is expected to provide a full accounting of all government spending through the pandemic, which has sent the deficit for the fiscal year to almost $400 billion.

It is also expected to outline the Liberals’ plan to spend between $70 billion and $100 billion over the coming years in fiscal stimulus to help the economy recover.

Goldy Hyder, president of the Business Council of Canada, said in a statement that the government needed to provide economic hope to Canadians with an end in sight to the pandemic.

“To build confidence, the federal government must present a comprehensive and credible plan that spurs investment, private-sector job creation, and long-term economic growth," he said.

The government will need to get the support of at least one major opposition party to pass its budget. Failure would mean the government falls and would almost certainly provoke a federal election.

The government has previously said this year’s budget will include measures to create a national child-care system, invest in skills training and help green the economy.

Additional measures pitched by departments have faced a simple question: how much economic growth can this buy?

The budget is likely to include spending on traditional areas like infrastructure, including for public-sector projects that could act as a catalyst for private projects, said Deloitte Canada chief economist Craig Alexander.

But he also noted that spending on social programs could also provide an economic boost in the short and long term, pointing specifically to child care.

By Alexander’s estimates, governments receive between $1.50 and $6 for every dollar invested in child care, suggesting it can help break down economic barriers by raising labour-force participation rates for parents, and mothers in particular.

“I don't think the economy needs the government to just go and spend money on things that would just accelerate economic growth in 2021,” Alexander said in an interview.

“What we need is strategic investments that will provide a boost to the economy over the medium to long term.”

The budget will be the first one since March 2019 after the government opted not to introduce one in 2020, pointing to the uncertainty the pandemic had caused to the domestic and global economic outlook.

Freeland asked the Finance Department in the fall to detail the difference between a budget and a fall economic statement.

A footnote in the responding briefing note, a copy of which The Canadian Press obtained under the Access to Information Act, said "while a budget is typically presented ever year, the government is under no obligation to do so."

Freeland delivered an economic statement in late November, which pegged the deficit at $381.6 billion this year, but closing in on $400 billion if widespread lockdowns caused demand for aid to increase again. The federal debt was likely to top $1.2 trillion.

The Liberals argue the debt is manageable because economic growth should outpace interest rates, meaning more money coming in than the federal treasury will have to pay out over time.

A report Tuesday from the C.D. Howe Institute said the fiscal sustainability the Liberals outline is possible, but far from guaranteed.

If repayments are bigger than economic growth, that could mean spending cuts, tax increases, or a combination of the two, may be needed to keep deficits from spiralling.

The think tank’s paper argued for the government to cut business subsidies that don’t address a clear market failure. If tax increases are necessary, the think tank said taxes on business investment should be avoided because they drive capital overseas and could push down wages here.