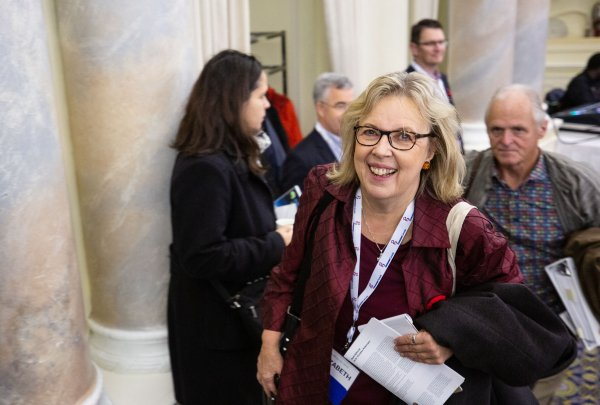 The former leader of Canada's federal Green Party discussed climate change solutions, the road to COP26 and the urgency of the climate emergency in an interview with Canada's National Observer.

When it came to discussing Canada’s role in the global fight against the climate crisis, former Green Party leader and Saanich-Gulf Islands MP Elizabeth May did not pull any punches during a Conversations event hosted by Canada’s National Observer on Earth Day.

“We’re the embarrassment in the room,” May said on Thursday evening. “Even after four years of Trump, our record is significantly worse, so we really need to face facts. It’s the time for tough love.”

May emphasized that her criticism isn’t partisan or political. “I sure would love to celebrate what the Liberals were doing, but they have not yet got a target that’s consistent with holding to 1.5 degrees,” she said. “I’m not a psychiatrist, I shouldn’t diagnose, but cognitive dissonance is a problem where you can say, ‘We are climate leaders, and the pipeline must be built.’”

May joined Conversations host and Canada's National Observer founder and editor-in-chief Linda Solomon Wood for the hour-long event on Thursday evening, which included live music performances from celebrated violinist Yolanda Bruno. More than 300 people attended the event, from youth in Toronto to May’s own constituents in British Columbia.

The event occurred on the first day of U.S. President Joe Biden’s global climate summit, which saw leaders from 40 countries report on their climate progress and share revamped plans for climate action. While the European Union prepares a multilateral climate plan, the U.K. approaches 78 per cent reduction in emissions from 1990 levels and the United States aims for 50 per cent emissions reduction by 2030, May said: “Canada was about the weakest when we should have been one of the best.”

Citing the U.K.’s Climate Accountability Act, May said that while European countries have managed to create meaningful bipartisan policy around climate change, climate action is still positioned as a contentious partisan platform point in Canadian politics. “I think the culture of the EU and the U.K. has not allowed this business of right-wing or left-wing politics to own a climate issue,” said May. “Right-wing politicians understand the science when you get to Europe, and they push hard.”

May said Biden’s summit, which included comments from Mexican-Chilean Indigenous climate activist Xiye Bastida, set an instructive tone. “I never thought we’d see a U.S. president open up the floor to a global audience for a young woman to call for the end of capitalism,” said May, “but it was a good day.”

“We’re the embarrassment in the room,” @ElizabethMay said about Canada on Thursday evening. “Even after four years of Trump, our record (on climate) is significantly worse, so we really need to face facts. It’s the time for tough love.”

May said three global tipping points — the Western Antarctic ice sheet, the Arctic ice and coral reefs — are rapidly approaching, and that a domino effect means that once each is severely impacted, halting their demise would be impossible. The good news, she reiterated, is that we still have time to stop short of these tipping points while maintaining a stable economy. For that scenario to happen, May said it is essential to shut down the oilsands.

“Anyone who understands climate science will say, ‘We can’t be producing from the oilsands,’” said May, noting that given Quebec’s pivot under Pauline Marois to ban asbestos, there is precedent for massive industrial and economic upheaval in response to dangerous conditions.

“We can’t pretend that because we’re a big country, we can’t shut down something dangerous,” said May. “The government shut down the asbestos industry. It wasn’t politically easy.” May proposed a 2030 shutdown of the oilsands, a timeline that provides enough of a buffer to develop infrastructure such that “no one in Alberta should suffer.”

To close the event, Solomon Wood shared five video questions for May from National Observer subscribers, ranging from a 20-year-old in Toronto who asked how to deal with destructive overfishing industries to a Green Party member wondering if the Greens and NDP could ally to improve their impact. (May responded: "I can assure you, from many scars and many injuries, the NDP is not interested in co-operating with us. I'm open to it. They're just not open to it. And frankly, I don't see climate leadership there, either.")

Rounding out this segment were sisters Navya, age 4, and Radhika, age 6, who asked May how to help animals and curb pollution, respectively. May greeted the questions warmly. Before thanking the kids’ teachers for their work during the pandemic, May touted anti-cruelty laws and the importance of shifting away from cars as a primary method of transportation.

“Kids can say, ‘Can I take my bike? Let’s get on the bus,’” said May. “Kids can tell their parents, and it will educate their parents.”

Can Elizabeth May save the world?

I enjoyed the nterview with

I enjoyed the nterview with Elizabeth May, but a question came to mind as I watched it. She is quite critical of Justin Trudeau for not being bolder in his climate action, but does he actually have the political capital to be that way.