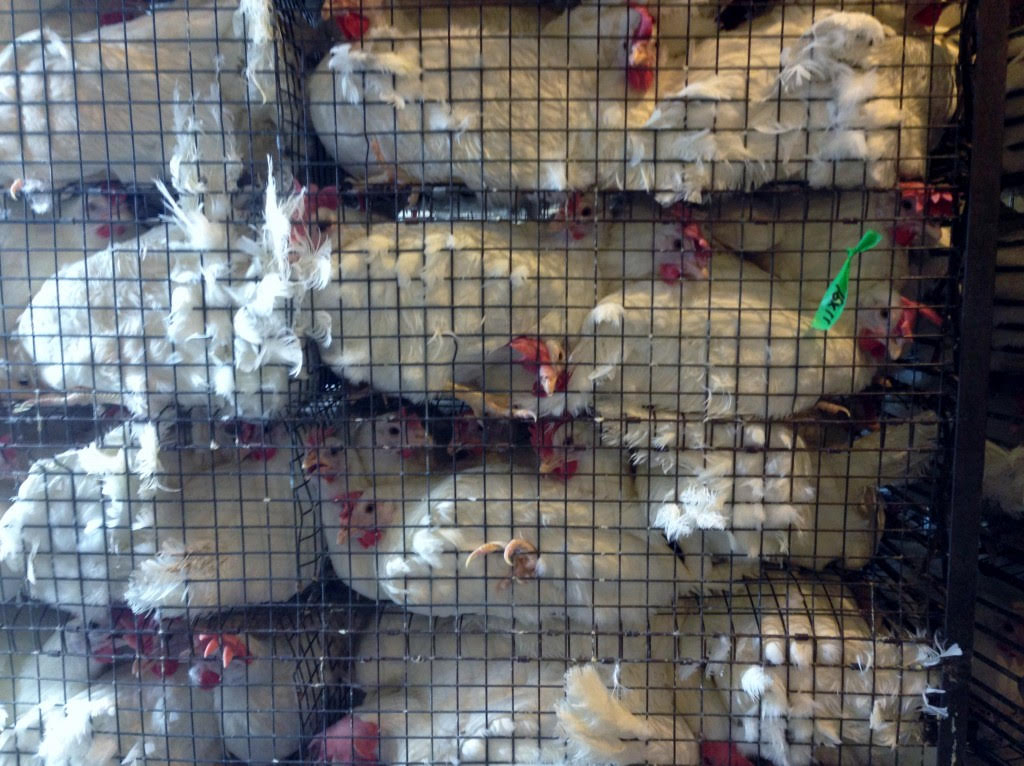 Meat, dairy and egg production in Canada involves forcing thousands of animals to live in filthy conditions. By any epidemiological standard, this is a disaster waiting to happen, write Jenny Henry and Darlene Levecque. Photo by Mercy for Animals Canada
Previous story
Next story

As Canadians venture beyond the one-year mark since the official declaration of the COVID-19 pandemic, we do so with much reflection and lessons learned. We now look very differently at issues of public health, personal hygiene and even travel. However, one area that appears to be lacking the mass scrutiny and worry it deserves, especially in the wake of a pandemic caused by a zoonotic disease, is our food system, particularly how we breed, confine and slaughter animals.

It is likely that COVID-19 emerged in much the same way as bird flu, swine flu, Ebola and mad cow disease: from food markets and factory farms. Farmed and caged animals create the perfect breeding environment for zoonotic diseases, and not just in other countries. Canadians need to be much more concerned about the potential for future pandemics stemming from our own food system.

The environmental impacts of raising animals for food have been made abundantly clear in recent years. Animal agriculture is wiping out rainforests, causing mass extinction of species, polluting our air and waterways, and bringing us dangerously close to causing irreversible changes to the Earth's climate systems. And now it appears that if global warming doesn’t get us, a zoonotic disease just might.

Meat, dairy and egg production in Canada involves packing thousands of animals together in massive sheds, forcing them to live in filthy conditions, filling man-made lagoons with animal waste and making staff work in dangerously close contact with animals and each other. By any epidemiological standard, this is a disaster waiting to happen. In fact, the U.S. Centers for Disease Control and Prevention states that “three out of every four new or emerging infectious diseases in people come from animals.”

Federal and provincial governments in Canada help fund meat, dairy and egg production to the tune of hundreds of millions of dollars each year through subsidies, grants and loans. In 2019, for example, the federal government began doling out $1.75 billion over eight years to nearly 11,000 dairy farmers across Canada to compensate for market losses, while also providing up to $10 million in grants for selected dairy processors via the Dairy Processing Investment Fund. The Canadian government also announced in 2019 a $6-million investment to help promote pork exports and, last year, a $691-million gift to egg and chicken farmers. And this is all before receiving government aid for pandemic-related market disruptions. That’s a lot of taxpayer money being distributed to a food system that poses tremendous risk to the health and home of Canadians.

The government has invested some money into safer and healthier plant protein production over the last couple of years, providing nearly $100 million to Winnipeg-based Merit Functional Foods, which produces plant-based protein from Canadian peas and canola. Alberta-based Food Processing Development Centre is also receiving $2.6 million of federal funding to “support the installation of equipment specifically focused on supporting companies to develop new plant-based foods and products,” according to a Western Economic Diversification Canada statement. But this is just not enough to fund a full transition to safer food production that we so urgently need.

For so long, the animal agriculture industry — including lobby groups such as Dairy Farmers of Canada, Chicken Farmers of Canada and the Canadian Cattlemen’s Association — has played a huge role in shaping federal agricultural policy, spending millions of dollars on lobbying efforts each year.

As a non-partisan advocacy group, Nation Rising is trying to level that playing field by lobbying governments to shift multibillion-dollar subsidies away from animal agriculture and towards the creation of a more sustainable, plant-based food system. We are also working to educate and empower the public to meet with their own MPs and demand change.

Canada cannot continue breeding, confining and killing animals for food on the scale that we do, and the government should not be continuing to fund it. Aside from the mass suffering of animals, the environmental degradation and noted health concerns associated with consuming animal products, we now know of the major risks that factory farming can pose to public health.

Canadian governments should look to initiatives being led in the U.S. and Europe, such as Transfarmation, by international advocacy group Mercy For Animals, The Vegan Society’s Grow Green campaign and ReFarm’d for examples on how to help animal farmers transition to safer plant-based food production.

We’ve reached a precipice. If Canadian governments and industries don’t start planning for a fundamental shift toward more sustainable and less harmful food production, we might not last another hundred years.

Jenny Henry and Darlene Levecque are co-founders of Nation Rising, a non-partisan political advocacy group lobbying the federal government to shift subsidies away from animal agriculture and towards the creation of a plant-based food system.

Yes, you are right in many

Yes, you are right in many ways and the picture of chickens is, as would be expected, quite horrifying...especially to a claustrophobe like myself. But it is not all like that, and you are not noting any concern about the alternatives. Wild fish stocks, like salmon, are over harvested, under pressure from climate change, dams, plastic, fish farming effluent and disease, Agribusiness, abetted by the chemical industry and enamored of vast monocultures, is destroying biodiversity, polluting water, destroying and depleting the soil, killing bees and poisoning us. Almond production for vast quantities of almond milk is drying California and abetting climate change, raising the likelihood of catastrophic fire. Avocado production is destroying monarch butterfly habitat. The nutritional value and ecological blamelessness of alternative "meat" is in doubt. The list goes on...and on. Yes, we can garden or even farm sustainably, and while most people simply are not going to do that or even pay for the produce, it is worth encouraging in articles like this, and this includes some meat. For instance, take a look at ranching in southwest Alberta, not the feedlots you would probably seek out to bolster your point, but the cattle raised on thousands of hectares of native grass, on habitat that supports the whole spectrum of wildlife and biodiversity including species at risk, where water sources are protected, invasive species controlled by judicious use of sheep or well tested biological controls. You don't have to eat meat, of course, but do broaden your vision.

We must stop industrial

We must stop industrial farming of animals and plant-based foods.