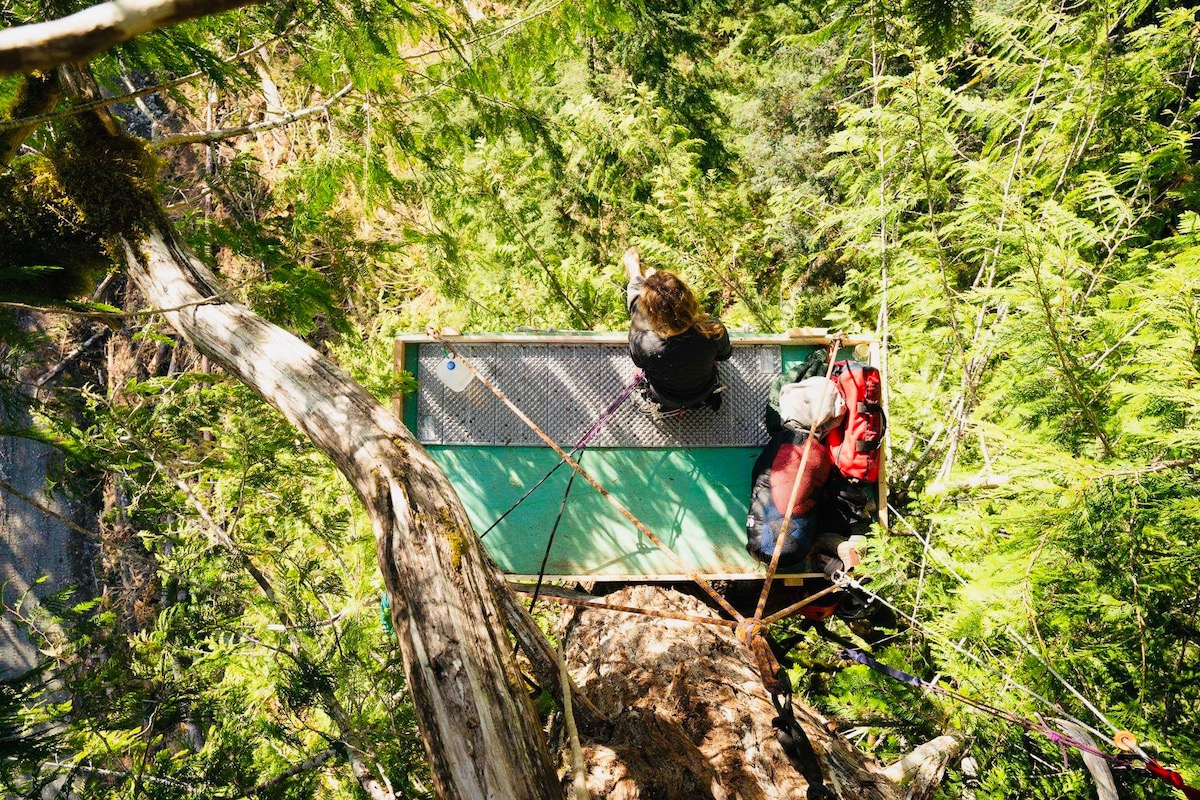 Police removed “Pony,” a tree-sitter with the Fairy Creek blockades, from her post 100 feet above the ground earlier this week. Photo by Will O'Connel
Previous story
Next story

“Pony,” a tree-sitter, dangled on a seven-by-four platform suspended in the canopy of two ancient Douglas fir trees, 100 feet from the ground, as 14 RCMP officers surrounded her below. A helicopter flew overhead. Loggers began to fell trees nearby, less than two trees away from tree-sitters.

It was the second day of the RCMP’s attempt to dismantle Pony’s tree platform, located in a remote area where forest protectors with the Fairy Creek movement have been protesting the logging of some of Vancouver Island’s last remaining old-growth forest. The police tactics of removal were escalating. “They did threaten tear gas and rubber bullets. They asked the officer on my tree sit to put on his tear gas goggles. The whole time during the arrest process I had a large gun pointed at me,” Pony told me over the phone after she was removed from her tree-sit.

“I just felt so alone. Having police presence without media and legal observers was quite scary. I didn’t trust the police tactics for getting me out of there. It was one of those things where if anyone slips up, there is no evidence of it; it’s just my word versus 14 officers.”

While the injunction enforcement unfolded, no one was there to witness it. That day, all media and legal observers, including myself, were denied access.

For the second day in a row, I was attempting to report on the Caycuse blockade. To reach the site near Caycuse Valley entails a drive of over two hours down active logging roads, without cell service, in a remote area of unceded Ditidaht territory. I was stopped by several RCMP officers at the exclusion zone erected by RCMP approximately eight kilometres away from the Caycuse blockade.

The exclusion zone restricts media and legal observers from entering a large region covered by the injunction — a tactic used in 2020 when police raided Wet’suwet’en blockades opposing the construction of the Coastal GasLink pipeline. A year before those raids took place, the Civilian Review and Complaints Commission told RCMP that broad exclusion zones were “impermissible.” Now, nearly two years later, RCMP are deploying a similar strategy at the Fairy Creek movement blockades, where arrests have been censored and journalists are corralled and contained within designated media areas, if granted access at all.

Chief Supt. David Attfield, who oversaw the Wet'suwet'en access point on Gidimt'en territory, is the gold commander directing police enforcement and media operations for the Teal-Jones injunction at the Fairy Creek blockades.

After several hours of discussion with RCMP media liaisons, I — along with a CBC reporter and Marnie Recker, a photojournalist on assignment for Nuu-chah-nulth Tribal Council’s newspaper, Ha-Shilth-Sa — was denied access on the grounds that police needed to protect their trade craft from public view. Recker would later be arrested that day for crossing the police tape marking the exclusion zone. The police informed her she would be charged for obstruction, to which Recker replied: “Obstruction of what? You are obstructing me from doing my job.”

The public has a right to know if police tactics are ill-applied. Journalists should not have to negotiate with police officers to do their job. We have a Charter of Rights and Freedoms that allows for freedom of expression and freedom of the press. When RCMP block or offer only controlled media access, the quality of information and reporting is inevitably impacted.

On May 26, a coalition of media outlets and press freedom groups, including the Canadian Association of Journalists (CAJ) and Canada’s National Observer, filed an application in B.C. Supreme Court, asking a judge to order the RCMP to provide journalists with access to injunction enforcement actions taking place at the Fairy Creek blockades.

“Journalism is a key ingredient in the social fabric of any democratic society. To attempt to circumvent that or obfuscate that progression of events is something that we can’t stand for, which is why we decided to take legal action,” CAJ president Brent Jolly said over the phone.

There will be many more movements and injunctions like the ones at Fairy Creek as the climate crisis intensifies, natural resources continue to grow more limited and Indigenous communities assert their rights. The unchecked media obstruction by RCMP unfolding at the Fairy Creek blockades could set a dangerous precedent for democracy in the larger, ongoing movement for Indigenous sovereignty and climate justice.

“Speaking from the coastal experience, colonial political actors and systems have been attempting to disrupt our sovereignty since their forceful arrival here… Indigenous Peoples are used against our own peoples and families, becoming another resource exploited by colonial actors,” Pacheedaht Elder Bill Jones wrote. Jones dismisses a statement by Chief Coun. Jeff Jones and Frank Queesto Jones speaking out against the logging protests, noting it was written in co-ordination with the NDP government and questioning the authority they have to speak on behalf of the community.

By denying media access, RCMP silences the story of old-growth logging, Indigenous self-determination and peaceful protest on the ground.

Over the phone, Pony described to me the sound of raging chainsaws and the deafening crash of giant trees falling, followed by sudden silence. She saw a bear cub dart out across the clearing. “It takes five minutes to fall a 500-year-old tree. There were birds nesting in the trees I was sitting in. I knew that as soon as my feet touched the ground, the next day the whole forest I spent so much time in would be gone. And all I could do was bear witness to that.”

The public should be able to bear witness as well.

Thank you Maia for being

Thank you Maia for being there on our behalf. It appears that the ‘law’ is still just corporate law and that judges are just a ‘legal’ extension of that. Use all the tactics you can to keep this issue in front of the public. Eventually the public noise will be heard.

|Well now at least we know

|Well now at least we know the RCMP actions at the Wet'suwet'an camp weren't aberrations....going forward when extractivists wish to extract, the 'red coats' will be on hand to make sure they can do it safely.....and perhaps we don't need journalists to tell us what we already know. The Canadian wild is 'open for business.'

When you opt for civil

When you opt for civil disobedience, you step outside the law and you opt out of the civil community compact that constitutes obedience to the law. That will have consequences.