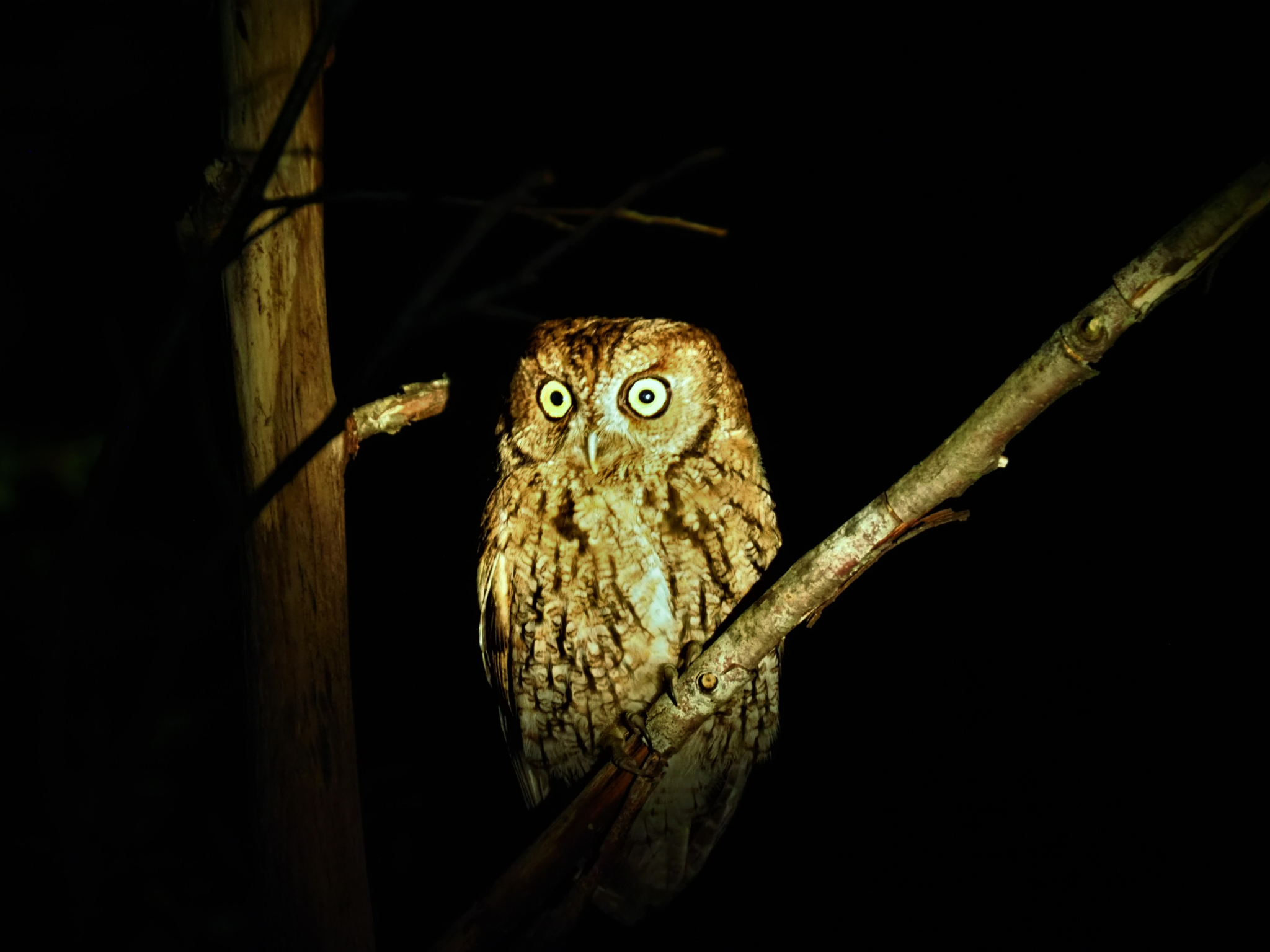 A western screech owl photographed on May 21, 2021 near the Eden Camp blockade. Photo by Royann Petrell
Previous story
Next story

Reported sightings of a threatened owl species in the Fairy Creek area are credible, the B.C. ministry responsible for forest conservation has confirmed.

A spokesperson for the province's Ministry of Forests, Lands, Natural Resource Operations and Rural Development told Canada's National Observer “there are nesting pairs” of western screech owls, which are listed as threatened under the federal Species at Risk Act, in the area.

In the coming days, staff will attempt to find any owl nests, the ministry said, adding that Teal-Jones, the logging company that operates cutblocks in the area, has hired a wildlife professional to help find them and is delaying harvest within 500 metres of sighting locations until after nesting season.

Between April 5 and May 21, Petrell said she documented six sightings of western screech owls in several areas around Fairy Creek, near where environmentalists are protesting old-growth logging and RCMP are enforcing a court injunction against the demonstrations.

Now, Petrell wants access to the upper watershed of Fairy Creek to survey the area for owls and other animal species. According to an email sent by Environment Canada to Petrell, and reviewed by Canada's National Observer, the area is under-surveyed for western screech owls, which are listed as of special concern provincially.

Environmental groups and local politicians are calling for federal Environment and Climate Change Minister Jonathan Wilkinson to order a pause on logging on south Vancouver Island under the Species at Risk Act until the extent of the owl habitat can be surveyed.

Petrell said she recorded the first screech owl hoots at night while camping near the Fairy Creek headquarters on southern Vancouver Island in early April. She uploaded the audio files to an online database of bird species where contributors post sightings. Then messages started coming in.

A ministry spokesperson confirms that biologists will survey areas where western screech owls have been sighted. Teal-Jones is said to be delaying harvest within 500 metres of sighting spots until nesting season is over. #BC #Owls #Logging

“I got some emails from people saying, ‘This is fantastic, this is a very rare event. We haven't had owls in that area and reported it (to officials). Would you please get the .wav files and a photograph, and a GPS if you can?’” Petrell said.

A western screech owl recorded on southern Vancouver Island on May 10, 2021. Courtesy of Royann Petrell

After B.C. Supreme Court Justice Frits Verhoeven granted Teal-Jones an injunction against protesters’ blockades in the area, Petrell said she knew logging would start again and potentially disturb the owls.

Petrell said she has heard of just one other documented sighting in the area back in 2014.

Chad Kreutzenstein, 39, shared his experience of seeing the same owl species in the Caycuse watershed on Dec. 3, 2014, roughly 30 kilometres northwest of the Fairy Creek watershed.

“That evening, we were coming back up from exploring the river and just came across it as we were coming out of the river valley,” said Kreutzenstein. “It was in a tree, and we just caught the silhouette of it because it was getting dark. And then we got close enough. It didn't move, so we just took a picture.”

It was only when Kreutzenstein began hearing about the threatened owls that he realized his sighting was unique.

“I've been seeing a lot being posted online about the western screech owl and how it was threatened. And so I just mentioned that I had actually seen one,” Kreutzenstein said.

Kreutzenstein says he reported his sighting to the B.C. Ministry of Forests, Lands, Natural Resource Operations and Rural Development this year after speaking with Petrell.

“I got emails back saying, thanks, that it will probably be logged as an official observation. So that's good,” he said.

According to an official conservation status report from 2017, the western screech owl’s “precipitous decline in numbers” on Vancouver Island is linked to predator owls, habitat reduction and forestry operations.

“Populations are also impacted by forestry operations that reduce dead trees and snags that provide roosting and nesting cavities,” according to the report.

“They are cavity nesters. So they must have a cavity in a hole, just the right size, and 10 to 30 feet above the ground… They like those old-growth snags. They offer lots of opportunities for different holes,” said Petrell.

Green Party MP calls for conservation instead of logging

Wilkinson responded by saying the issue was under provincial jurisdiction, but Manly reiterated that the federal government has the authority to step in if the province fails to provide adequate protection.

Manly says this presents a chance for the federal government to create conservation and protection opportunities for Indigenous groups instead of restrictive revenue-sharing agreements that silence opposition for things like old-growth logging.

The federal government has invested over $100 million in Indigenous-led conservation projects through Canada’s Nature Legacy initiative.

“Indigenous protected and conserved areas have been described as diverse regional sustainable development models, where First Nations have control and authority over the land, and can be engaged in things like selective logging,” said Manly.

“But also the mandate is to ensure that there is a consideration for future generations. Whereas this model that we have right now is, 'Let's turn everything into a tree farm.'”

However, Manly says there is no moving forward with dialogue and decisions on conservation while old-growth logging is ongoing.

“We're just going to lose these areas, and then the discussion will come too late, you know. It doesn't fit in with what the mandate of that program is, and that is to protect Canada’s biodiversity.”