Keystone XL is dead, but the fight over Canadian oil rages on 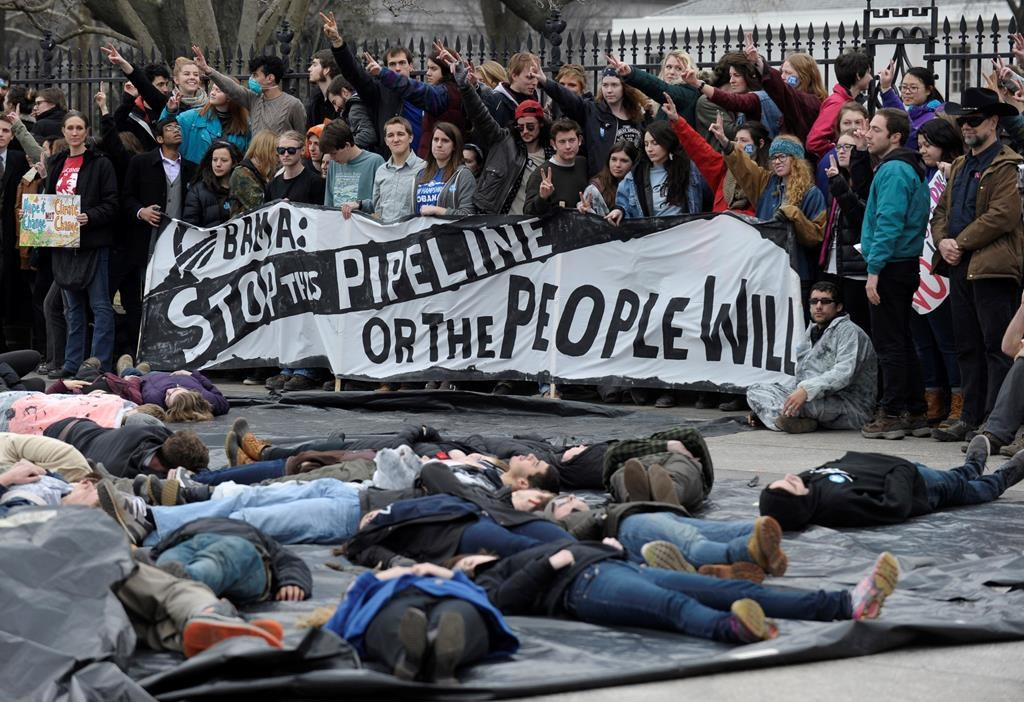 BILLINGS, Mont. (AP) — The Keystone XL is dead after a 12-year attempt to build the oil pipeline, yet the fight over Canadian crude rages on as emboldened environmentalists target other projects and pressure President Joe Biden to intervene — all while oil imports from the north keep rising.

Biden dealt the fatal blow to the partially built $9-billion Keystone XL in January when he revoked its border-crossing permit issued by former President Donald Trump. On Wednesday, sponsors TC Energy and the province of Alberta gave up and declared the line “terminated."

Activists and many scientists had warned that the pipeline would open a new spigot on Canada's oilsands crude — and that burning the heavily polluting fuel would lock in climate change. As the fight escalated into a national debate over fossil fuels, Canadian crude exports to the U.S. steadily increased, driven largely by production from Alberta's oilsands region.

Even before the cancellation, environmentalists had turned their attention to other projects, including Enbridge Energy's proposal to expand and rebuild its Line 3 pipeline in Minnesota, the target of protests this week that led to the arrest of some 250 activists.

“Don’t expect these fights to go away anytime soon,” said Daniel Raimi, a fellow at Resources for the Future, an energy and environmental think tank in Washington. “This is going to encourage environmental advocates to do more of the same.”

Bill McKibben, an author who was arrested outside the White House while protesting the Keystone XL in 2011, said its defeat provides a template to kill other pipelines, including Line 3 and the Dakota Access Pipeline from North Dakota's Bakken oil field.

Describing Keystone XL as “a carbon bomb,” McKibben said Line 3 is the same size and "carries the same stuff. How on earth could anyone with a straight face say Line 3 passes the climate test?”

Enbridge said the cancellation of Keystone XL will not affect its projects, describing them as “designed to meet current energy demand safely and in ways that better protect the environment.”

A second TC Energy pipeline network, known simply as Keystone, has been delivering crude from Canada’s oilsands region since 2010. The company says the line that runs from Alberta to Illinois, Oklahoma and the Gulf Coast has moved more than three billion barrels of oil.

Canada is by far the biggest foreign crude supplier to the U.S., which imported about 3.5 million barrels a day from its neighbor in 2020 — 61 per cent of all U.S. oil imports.

#KeystoneXL may be dead, but the fight over Canadian crude rages on as emboldened environmentalists target other projects and pressure the U.S. president to intervene.

The flow dropped slightly during the coronavirus pandemic but has largely rebounded. Import volumes have almost doubled since the Keystone XL was first proposed in 2008, according to the U.S. Energy Information Administration.

The Canadian Association of Petroleum Producers said Thursday that it expects no immediate effect on production from Keystone XL's cancellation, but the group predicted more oil would be moved to the U.S. by rail.

A series of fiery accidents occurred in the U.S. and Canada after rail shipments of crude increased during an oil boom on the Northern Plains, including a 2013 incident in which 47 people were killed after a runaway train derailed in the Quebec town of Lac-Megantic.

The dispute over Keystone XL and other lines raised diplomatic tensions between the two countries, but Canadian Prime Minister Justin Trudeau adopted a conciliatory tone with Biden, who canceled the pipeline on his first day in the White House.

Canada uses much less oil than it consumes, making it a huge exporter, and 98 per cent of those exports go to the U.S., according to the Natural Resources Canada.

Trudeau raised Keystone XL as a top priority with Biden while acknowledging that the president had promised in his campaign to cancel the line.

Both leaders have taken heat at home over Keystone, with Republicans slamming Biden for shutting it down while construction was underway, costing hundreds of jobs. The project was meant to expand oil exports for Canada, which has the third-largest oil reserves in the world, and provincial officials in Alberta wanted Trudeau to do more to save it.

The White House declined to comment on the cancellation. Spokesman Vedant Patel declined to say if Biden plans to address increased crude exports from Canada or intervene in other pipeline disputes.

His action on Keystone “signals at least some appetite to get involved," but pipelines that have operated for years would be tougher targets, Raimi said.

Winona LaDuke, executive director of the Indigenous-based environmental group Honor the Earth, called on Biden to withdraw an Army Corps of Engineers permit for Line 3 and to order a new study.

“He could stop the project,” she said. “Don’t ask us to be nice to Enbridge. They’re all over our land. They’re hurting us.”

The Biden administration has been “disturbingly quiet” on Line 3 and the Dakota Access line, said Michael Brune, executive director of the Sierra Club. He urged the administration to declare both unacceptable.

Fiercely opposed by Native Americans, the Dakota Access pipeline was the impetus for protests that were quashed by law enforcement. The Biden administration has not sought to stop the line, and it's still in court after a judge revoked its permit but allowed oil to keep flowing.

Alberta sank more than $1 billion into Keystone XL last year to kick-start construction. Officials in the province are considering a trade action against the U.S. to seek compensation.

Another question: What to do with pipe already in place at the U.S.-Canada border and other infrastructure along its route.

Jane Kleeb, a pipeline opponent in Nebraska, said state regulators should revoke the permit they approved for a route through the state. Otherwise, she said, TC Energy might try to sell the easements to another company.

Until the state acts, farmers and ranchers will continue to face TC Energy attorneys in court, "protecting their property from an eminent domain land grab by a foreign corporation,” she said.