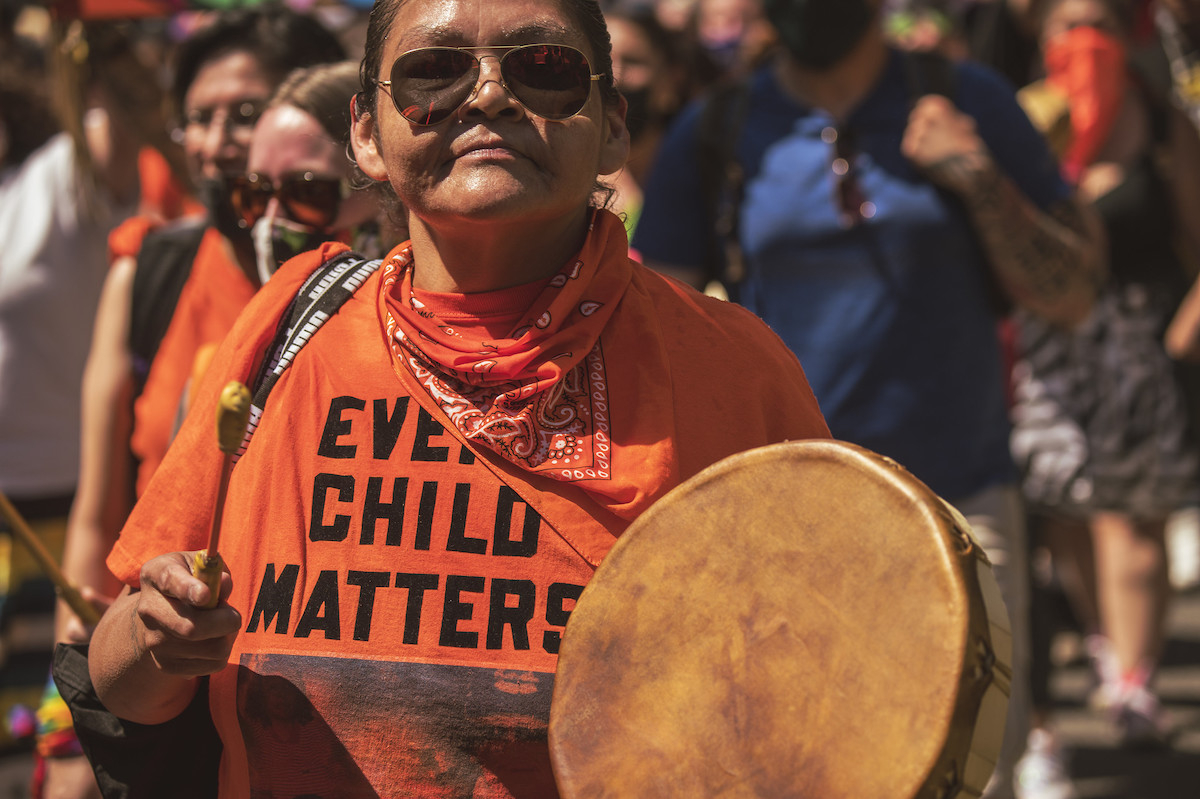 A protester joins a march demanding justice for the 215 children found in unmarked graves at the former Kamloops Indian Residential School in B.C. Photo by michael_swan / Flickr (CC BY-ND 2.0)
Previous story
Next story

There are only two reasons for anyone in Canada to have been shocked by news that 215 Indigenous children had been found on the site of the former Kamloops Indian Residential School.

One is understandable: people with personal trauma related to residential schools triggered by the unmarked graves.

The second — and the one that made me angry enough to write this — is the realization that until last month, some people didn’t know Canada was the perpetrator of residential schools where children died in great numbers without their parents being notified. The first realization of genocide. If you are in the latter group and in a position of power — a mayor, a premier, a prime minister or, really, any elected office — in a post-Truth and Reconciliation Commission (TRC) Canada, there is no excuse for you.

The TRC was part of the court-ordered settlement agreement between residential school survivors, their families and the churches that ran the residential schools. It ran from June 2008 to June 2015 and, in that time, heard testimony about the abuse children suffered, ranging from physical and sexual assault to malnutrition and neglect. Throughout the testimony and the reports to the TRC, there is clear evidence that thousands of children died prematurely as a result of the abuse they endured. It was so prevalent in testimony that Volume 4 of the TRC report dedicates all 273 pages to Missing Children and Unmarked Burials.

The only reason the TRC even happened was because of pressure exerted by many people who came forward to tell their stories. They suffered as a result.

Then, during the seven years of TRC hearings, approximately 7,000 people related their experiences, giving rise to tens of thousands of pages of testimony. Retriggering this extreme trauma came at a high price to these survivors, their families and their communities. The response this past couple of weeks suggests nowhere near enough people listened.

This is to say nothing of the Oppal Commission in B.C. and the National Inquiry into Missing and Murdered Indigenous Women and Girls, both of which produced lengthy reports that detail the horror of the abduction and murder of Indigenous women and girls in Canada. The pain those survivors and the families of the murdered went through to tell those stories is indescribable.

Even if you’ve read none of the copious records of the crimes committed against Indigenous Peoples, the very fact the word survivor is used would indicate that somewhere, there are the graves of those who didn’t make it.

Kamloops is the beginning of a long next chapter. In the few weeks since, 104 more unmarked graves were found at a former residential school site in Brandon, Man., and 35 graves in Lestock, Sask., found three years ago are finally coming to national attention. If the federal government finally pays for this work to be done properly, as the TRC requested, it’s estimated up to 6,000 children will be found buried at residential school sites.

So if you’re in a city council, legislature or Parliament and find yourself at a microphone or on social media expressing newfound shock and outrage, I can’t find the words to tell you how disappointing it is to hear these brave survivors have gone unheard by you. The world needs less of your shock and outrage and much more of your policy and action.

Three years ago, I travelled to Rwanda as part of the Loeb Fellowship I was awarded at Harvard’s Graduate School of Design to learn more about the Rwandan genocide and the subsequent work of reconciliation to rebuild their communities. I learned many difficult things from their hard work to find a way beyond the genocide and leave two here for you.

First, there are no neutral parties in genocide. You are either a victim or a perpetrator. To refuse either identity in the context of the genocide makes it impossible to move on from these positions. It is the first and most fundamental truth of genocide.

We know that the testimony from the survivors and the families of those who have been lost was hard for them to give because it required them to relive trauma. Acknowledging being victimized is very difficult emotional work.

The second thing I learned in Rwanda is that moving on is not a passive thing that happens in reports or history books. It requires not just laying the truth bare but actively acknowledging it. This requires perpetrators to share the emotional burden and accept their role. And that means active reconciliation: reading personal testimonies, making reparations and, most of all, finding a way to forgive yourself and atone for what was done either by you directly or by those acting in your name.

It’s a long road that starts by moving past shock and outrage to authentic engagement. Reconciliation isn’t a slogan or policy: as noted Indigenous advocate (and my friend) Ginger Gosnell-Myers says, reconciliation is an active collaboration for systemic change. It starts with everyone listening to survivors. It starts with acknowledging the truth.

Not sure what the "action" is

Not sure what the "action" is, still. Mostly, such articles mainly call for awareness, understanding. Spiritual accomplishments, not material. Since the material conditions of so many First Nations is so poor (eg, the crowded conditions causing a COVID wave right now, in one), I'm always eager to get the topic back to physical projects.

Can we have an immediate bill to build 100 houses in that community? Probably about 10 million bucks, about 30 cents per citizen. It would be a start, a gesture, like buying somebody a drink before you start in on your apology.