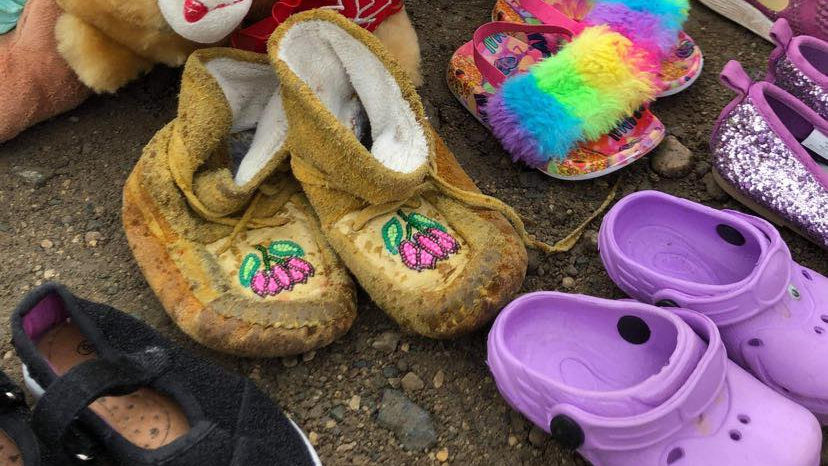 A memorial in Cross Lake, Man., for the remains of 215 children found at a Kamloops residential school. Photo courtesy of Niki Ashton's office
Previous story
Next story

MPs in Canada are saying the remains of 215 Indigenous children buried in unmarked graves at a residential school in Kamloops, B.C., are a visceral reminder of the trauma wrought by these institutions, and are calling on the federal government to act.

In Nunavut, NDP MP Mumilaaq Qaqqaq emphasized the discovery is not news to residential school survivors but, rather, confirmation.

“Now we can really start this conversation and ask: How many more bodies are out there? How many more children haven't gotten home yet?” said Qaqqaq.

Perspective, she says, is important. Qaqqaq says the children were supposed to be people’s parents and grandparents and that this history is recent.

The mass grave in Kamloops was located last week using ground-penetrating radar and revealed the remains of the 215 children. The Tk'emlúps te Secwe̓pemc First Nation, on whose territory the residential school is located, started working to confirm the remains two decades ago.

Prime Minister Justin Trudeau has since promised action at the federal level, but has yet to lay out specifics. After days of public pressure, he ordered all flags lowered to half-mast on May 30.

“Now we can really start this conversation and ask: How many more bodies are out there? How many more children haven't gotten home yet?” says NDP MP Mumilaaq Qaqqaq. #ResidentialSchools #Genocide #Indigenous

Canada’s National Observer reached out to dozens of MPs to get their reactions on the situation.

Niki Ashton, NDP MP for Churchill-Keewatinook Aski, called it “absolute proof of that genocide.” The trauma, sadness, grief and anger expressed by her constituents is immense, she said.

“I'm hearing so much from people about wounds reopening and survivors being retraumatized,” she said.

At an action to honour the lives of the children found in Kamloops, Ashton recounts meeting a mother who came to lay down a pair of children’s shoes with her three-year-old son — the same age as Ashton’s own child and the age of the youngest child found in the mass grave.

“She was there for her mom, a survivor of residential school who couldn’t bring herself to go,” said Ashton.

“The trauma is so encompassing, it's debilitating.”

Leah Gazan, NDP MP for Winnipeg Centre, says the child welfare system needs to be understood as a continuation of the genocide seen during the residential school system. According to the 2016 census, more than 50 per cent of children in foster care are Indigenous, although they account for only 7.7 per cent of the child population.

“People want to see justice for these little kids and other children that had to endure this genocide,” said Gazan.

“The fact that this country still doesn't acknowledge it as a genocide — not a cultural genocide, but a genocide under the UN Convention of Genocide — is very troublesome.”

More than 150,000 Indigenous children were forced to attend church-run residential schools across Canada between the 1870s and 1996, when the last school closed. Children experienced myriad abuses, were forbidden from speaking Indigenous languages and were separated from their families.

The Kamloops Indian Residential School was the largest in the system, with 500 children attending in the 1950s.

In 2009, the Truth and Reconciliation Commission of Canada (TRC) requested $1.5 million to find mass graves at residential school sites and was denied. Gazan, who is a member of the Wood Mountain Lakota First Nation, says Indigenous people shouldn’t have to beg for government to uphold their basic rights.

“We need to respond with action by listening to survivors, those intergenerationally impacted communities, with actions they want to take to proceed, and then we need to uphold their requests with action,” said Gazan.

“We need to move past symbolic gestures to real action.”

Gazan said one example of this would be marking off residential school sites as active crime scenes until communities, survivors and families decide how they wish to proceed.

Other parties are also calling for more decisive action.

On May 31, Conservative Leader Erin O’Toole sent a letter to the prime minister requesting funding for investigations at all former residential schools in Canada, the development of resources to educate Canadians on the “tragic history of residential schools,” and the allocation of resources for communities to commemorate and honour any individuals discovered through investigations.

O’Toole also called for a comprehensive plan to implement the TRC's Calls to Action 71 through 76 — which includes allocating sufficient resources to develop and maintain the National Residential School Student Death Register — by July 1.

Dan Mazier, Conservative MP for Dauphin-Swan River-Neepawa, echoed the need to implement the TRC Calls to Action in a statement to Canada’s National Observer.

“It is paramount that we ensure resources are allocated to honour individuals discovered through the investigation,” reads Mazier’s statement.

“As a nation, we must remain committed to righting this historic wrong committed against Canada's Indigenous people.”

Arnold Viersen, Conservative MP for Peace River-Westlock, also noted the Indigenous and northern affairs committee, of which he is a member, has unanimously agreed to study six of the TRC Calls to Action, saying: “We must continue (to) seek justice for those who are not able to.”

Meanwhile, NDP Leader Jagmeet Singh has called on the Liberal government to make comprehensive moves in light of the discovery.

“Canadians are reeling from the horror of this discovery,” Singh said.

He pointed to court battles between the federal government and residential school survivors, as well as the judicial review of a human rights tribunal ruling involving Indigenous children.

“What I’m calling for is: Let’s fight to create justice today and stop taking Indigenous kids to court, and stop fighting survivors in court, and actually work to bring about justice now.”

Calls to action need to be implemented, MP says

In Nunavut, Qaqqaq, the NDP MP, said the path forward is clear.

“We have the Truth and Reconciliation Calls to Action. There are 94 very clear things that the federal institution can be investing its resources and time and efforts into,” she said, noting that only 10 of the TRC Calls to Action have been fulfilled.

For instance, the investigation that uncovered the children’s remains was completed with a provincial grant and new technology. It was not done by the federal government, despite the TRC Calls to Action. If the B.C. government had not funded the investigation, Qaqqaq wonders how long it would have taken for the children’s remains to come to light.

“It's another confirmation, another reminder that we are, have been, and still are, less than,” said Qaqqaq.

“Every time something is uncovered or confirmed for the rest of the country that we already know, we're just trying to find more and more allies to be as upset and angry, and fighting for doing what's right.”