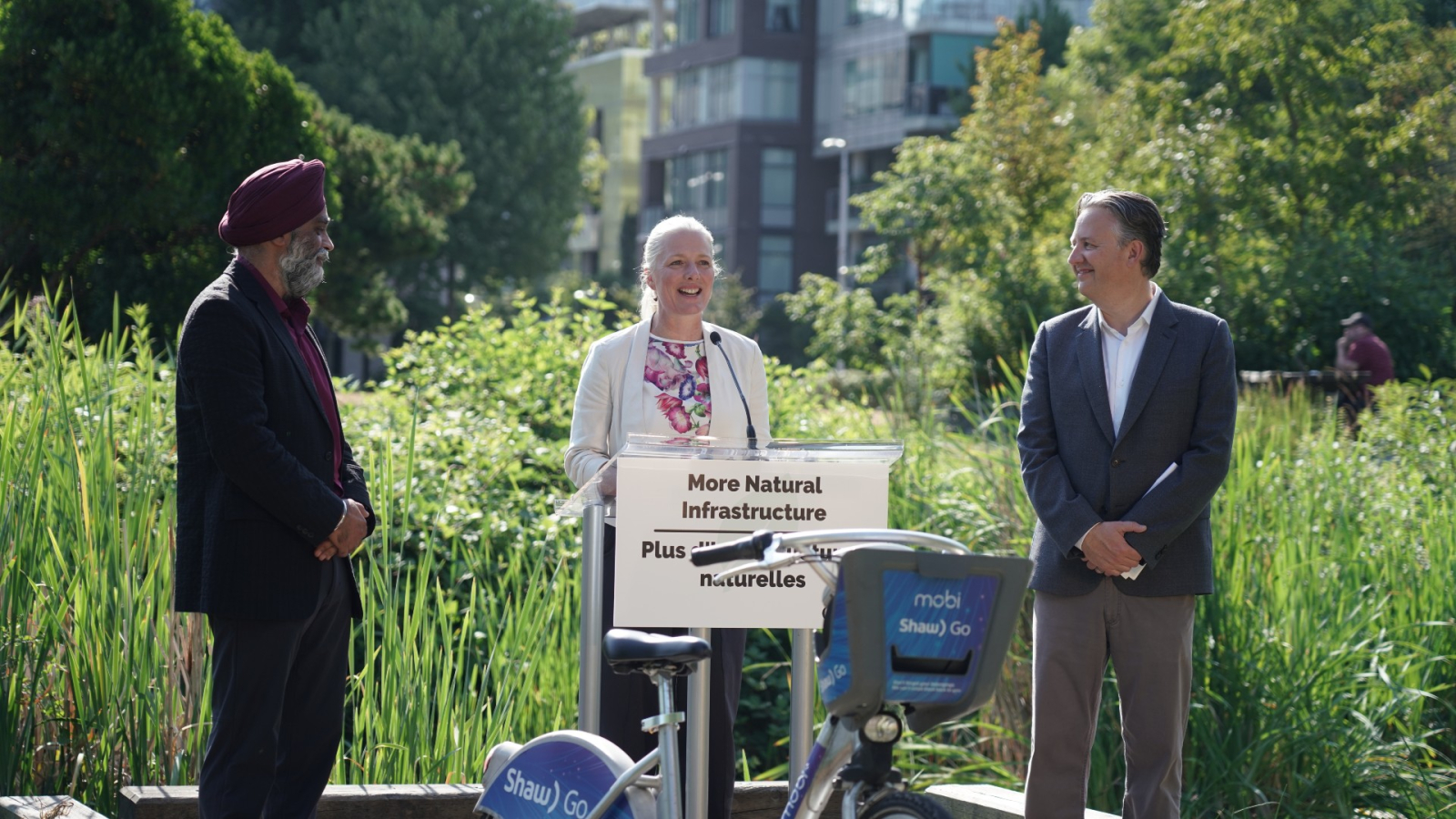 Infrastructure Minister Catherine McKenna announced the City of Vancouver can now apply for federal funding for up to $20 million for its Rain City Strategy on Monday morning at Hinge Park in Olympic Village. Photo supplied by Infrastructure Canada
Previous story
Next story

The federal government is inviting the City of Vancouver to apply for up to $20 million in funding for natural infrastructure projects to support the city’s strategy to capture and clean rainfall with natural solutions.

Vancouver’s Rain City Strategy aims to capture and clean 90 per cent of its annual rainfall, or 48 millimetres on average per day, by 2050, making use of natural infrastructure, such as absorbent landscaping, tree trenches, and green roofs to prevent urban flooding and improve water quality.

Stewart said an investment of up to $20 million would equate to about a 2.5 per cent increase in property taxes, underscoring the importance of the federal partnership.

Vancouver Coun. Christine Boyle said although the city is doing a lot of work on climate adaptation and mitigation, there are “challenges that extend far beyond what we can tackle as (a) local government alone.”

With the funding, Boyle said the city can act with greater urgency to address the climate emergency facing Canadians.

Now that the city is in the funding stream, it can put in an application and Stewart said people can likely expect an update on where the money will land at the beginning of September.

Infrastructure was identified as a key risk for climate impacts, but the report also noted infrastructure has the greatest “adaptation potential.”

Natural infrastructure projects involving wetlands, forests, soil and plants can be lower in cost and more efficient than built infrastructure because they have fewer maintenance and life-cycle management costs, the report found.

[email protected] can apply for up to $20 million of federal funds to support its strategy to capture and clean water using absorbent landscaping, tree trenches and green roofs to prevent urban flooding and improve water quality. #Vancouver

But because natural infrastructure projects are not immune to climate hazards and extreme weather events, the resilience of projects should be consistently monitored, maintained, and assessed, according to a new report from the International Institute for Sustainable Development.

The fact that there is now dedicated funding for natural infrastructure is a big step forward, said Jimmy Zammar, director of integrated strategy and utilities planning at the City of Vancouver.

“These types of investments really achieve a triple-word score for cities,” said Zammar.

Stewart said seven nature-based infrastructure projects have been delivered in the past year and 20 projects are anticipated in the next two years.

At Sunset Park, channels called bioswales were installed to concentrate and convey stormwater runoff, remove debris and pollution and recharge groundwater. The bike paths are shaded by trees, which simultaneously clean the air and improve the habitat, and plants were selected for their abilities to help water filter back into the soil and remove pollutants.

Zammar said the federal funding could support multiple years worth of projects similar to Sunset Park.

“We're really far from achieving the goal of 90 per cent without increased investments … so this funding is definitely taking us in that direction,” he said.

Achieving the ambitious goals set out by the Rain City Strategy will likely cost billions of dollars over several decades, but investments in green infrastructure pay dividends, said Zammar.

Natural infrastructure solutions help to hold water closer to where it falls, so it can filter back into the soil to recharge aquifers or return to the atmosphere through evaporation and transpiration from plants, he said.

“While doing that, we are basically preventing that water from rushing downstream (and) carrying pollutants into our receiving bodies,” said Zammar.

It also helps prevent combined sewer overflows because less rainwater is flowing into the pipes.

“We basically bring back the cycle of water into our communities, (which) can then have a cascading series of impacts to cleaner air, thriving plants and ecosystems, decreasing heat island effects while actually resulting in tangible impacts, as well to physical and mental health and community well-being, including active transportation,” he said.

The federal government’s new $200 million Natural Infrastructure Fund will invite select major cities with innovative natural infrastructure strategies to apply for funding up to $20 million as part of a $120-million funding stream for large projects.

The City of Toronto has already got the green light to apply for funding for its Ravine Strategy, which aims to protect, manage, and enhance ecological services and recreational opportunities provided by an urban ravine network spanning more than 300 kilometres.

“48 millimetres on average per day” amounts to over 17 metres per year of rain. Vancouver may be in the wet coast, but it is not that wet; there is something like half to one metre of rain per year depending on the exact location.