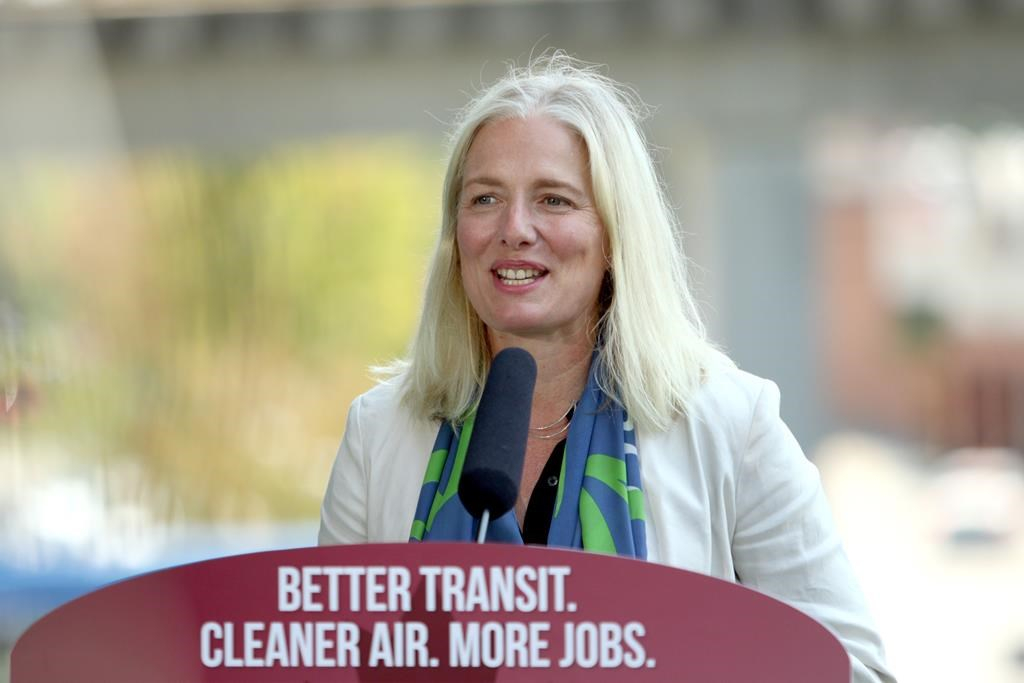 Minister of Infrastructure and Communities Catherine McKenna talks about the recent transit announcement during a press conference at Surrey City Hall in Surrey, B.C., on Friday, July 9, 2021. File photo by The Canadian Press/Chad Hipolito
Previous story

Speaking to reporters in Toronto Tuesday, McKenna says the funding will support communities in conducting projects to face the risks of wildfires and floods, rehabilitate storm water systems and restore wetlands and shorelines.

British Columbia's government has said accommodations for wildfire evacuees are filling up as the flames and smoke from numerous blazes spread, forcing more people from their homes and contributing to an acrid haze that's blanketing cities in neighbouring Alberta.

Smoke from the fires in B.C., as well as others in northern Saskatchewan, Manitoba and northwest Ontario, has resulted in special air quality advisories across the country.

The disaster mitigation and adaptation fund started in 2018 as a $2 billion program over 10 years to support communities in establishing the infrastructure they need to better handle natural disasters including floods, wildfires, earthquakes and droughts.

The new $1.4 billion fund will be spent over 12-year period, the department says.

McKenna says at least 10 per cent of the funding will go to Indigenous recipients.

"Climate change is having a devastating impact on Indigenous communities and a disproportionate impact," she says.

She says dealing with climate change should be through the same approach that the government has been taking in dealing with COVID-19 pandemic.

"We need to listen to science and scientists. We need to work with partners from municipalities to provinces to the private sector," she says.

"We all need to work together because, really, we have no choice."

B.C. wildfires force evacuations and leave others ready to flee