Without a Team Canada approach on climate, we risk getting left behind 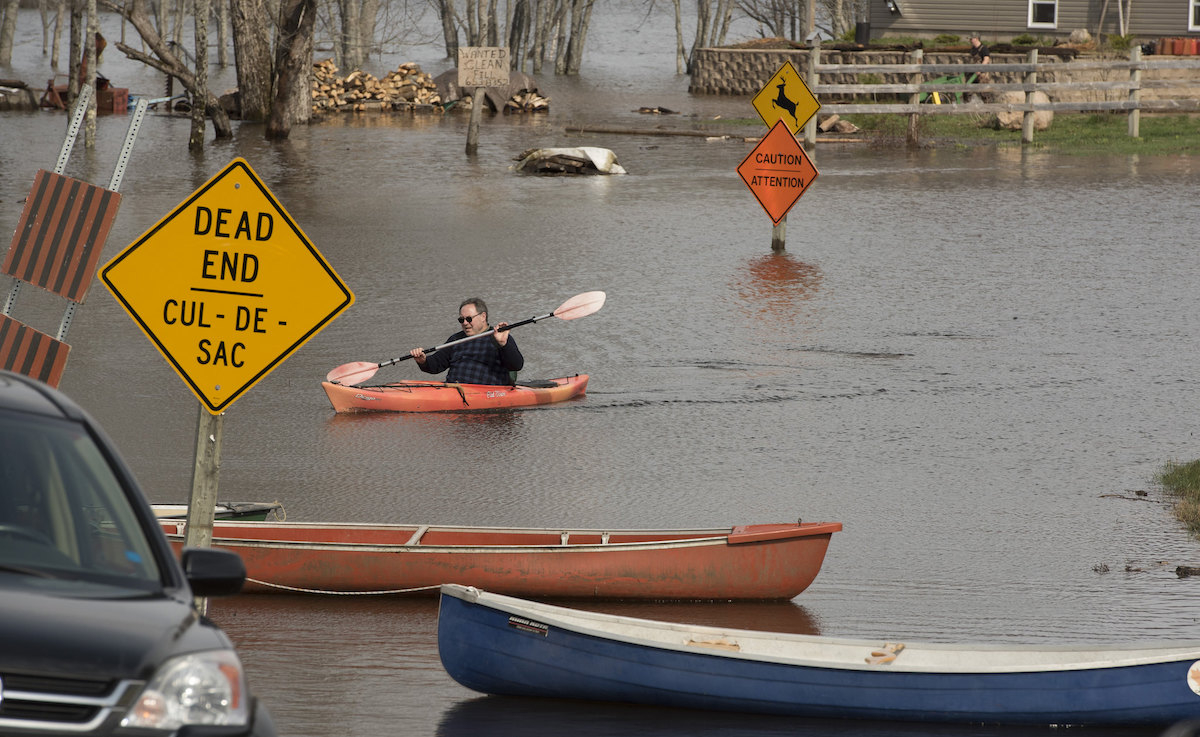 New Brunswick was hit with major flooding in 2018. To have a chance at combating this and other impacts of climate change, governments in Canada need to step up. Photo by Stephen MacGillivray Photography & Video via New Brunswick / Flickr
Previous story

The increased incidence of record-breaking heat waves, wildfires, flooding, and prolonged droughts are making all too apparent the devastating impact of climate change on human health and community stability. The United Nations has made it clear: All signatories of the Paris Agreement have to do more if the world is going to have a chance at holding the average global temperature increase to 1.5 C and averting even more damaging and deadly impacts of climate change.

Canada has the third-highest emissions per capita among developed countries, according to the Organisation for Economic Co-operation and Development. While the federal government has committed to reduce emissions by 40 to 45 per cent below 2005 levels, getting there requires a national effort. Given their jurisdiction over energy resources, it is important that Canada’s provinces and territories help to deliver a safe climate. Do they have the climate policies necessary to help ensure a safe and sustainable future for all?

Pembina Institute and Simon Fraser University’s School of Resource and Energy Management assessed every province, territory and the federal government on 24 indicators that are foundational to climate success. The findings are published in All Hands on Deck: An assessment of provincial, territorial and federal readiness to deliver a safe climate.

The analysis found that not a single government is fully prepared to help deliver a safe climate — despite the fact national emissions have only dropped by one per cent since 2005, and emissions actually increased in seven of Canada’s provinces and territories.

Though Canada’s ability to meet climate targets is threatened by emissions from oil and gas, and from transportation (in particular from freight, which will soon surpass passenger vehicles as a primary source of transportation emissions), none of the oil- and gas-producing jurisdictions have begun to plan for a decrease in demand or the potential of pricing based on carbon intensity, none have sufficient measures to deal with fossil fuel liabilities and no jurisdiction is using all of the policy tools available to dramatically reduce transportation emissions. Only two provinces have legislated zero-emission vehicle mandates (B.C. and Quebec), and none have legislated targets to reduce emissions from freight transportation.

To get it right, every jurisdiction needs higher emissions reduction targets and shrinking carbon budgets. To date, none of the provinces and territories have climate-safe carbon budgets. The global carbon budget is the total cumulative amount of emissions that can be emitted into the atmosphere while still having a chance to limit global warming to 1.5. degrees.

Manitoba is the only jurisdiction with a carbon budget, but it allows for an increase in emissions. Every jurisdiction also needs to set economy-wide carbon budgets for each sector of the economy and map net-zero pathways, focusing on their highest-emitting sectors first.

When it comes to climate policy and regulations, B.C. and Quebec have most of the ingredients in place, though they both need to increase their 2030 targets. Both have committed to net zero by 2050 and are working to reduce emissions in the key sectors of their economies.

Nova Scotia has the country’s most ambitious target for 2030 and is making great strides in meeting it; however, it still has work to do to ensure its electricity grid is fully decarbonized.

The provinces need to step up with forward-looking climate strategies, write @tur_isabelle of @Pembina and Prof. Thomas Gunton. #ClimateAction #NetZero

Neither Alberta nor Saskatchewan has targets to reduce emissions for 2030 or 2050, and they lack accountability mechanisms.

Ontario has shown little interest in adopting a net-zero target, and it has rolled back climate policies and programs. After a notable decline between 2005 and 2017, from 2017 to 2019, emissions in the province went up by five million tonnes.

Canada’s piecemeal approach to climate change isn’t working. It’s time for leaders to adopt a comprehensive climate strategy that includes science-based 2030 targets consistent with Paris goals and a commitment to net zero by 2050, credible climate plans that include robust modelling to ensure plans achieve targets, shrinking carbon budgets for every sector in the economy, legislated independent accountability mechanisms to keep them on track, and a commitment to prioritize reconciliation and equity. Combined, these elements demonstrate a serious commitment to delivering emissions reductions, while providing certainty for investors, corporate strategists and citizens.

All levels of government are responsible for acting on climate. We can no longer afford the delays that come from dismantling and redesigning policies. It’s time to scale up, not water down through weak implementation and offsetting policies elsewhere. The provinces need to step up to ensure the country not only meets its obligations, but seizes the opportunities for economic growth and increased equity and inclusion that will come with a forward-looking climate strategy.

Climate policy has been a polarizing force for too long in Canada. Canadians expect their governments to step up and work together to meet the challenge. Without a Team Canada approach, Canada risks being left behind.

Thomas Gunton is professor and founding director of the Resource and Environmental Planning Program at Simon Fraser University.

Isabelle Turcotte is the director of federal policy at the Pembina Institute.

By Fred Pearce | News, Energy | June 3rd 2021
Reports from the Race to a Safer World