Brampton gets federal funding to ramp up tree planting 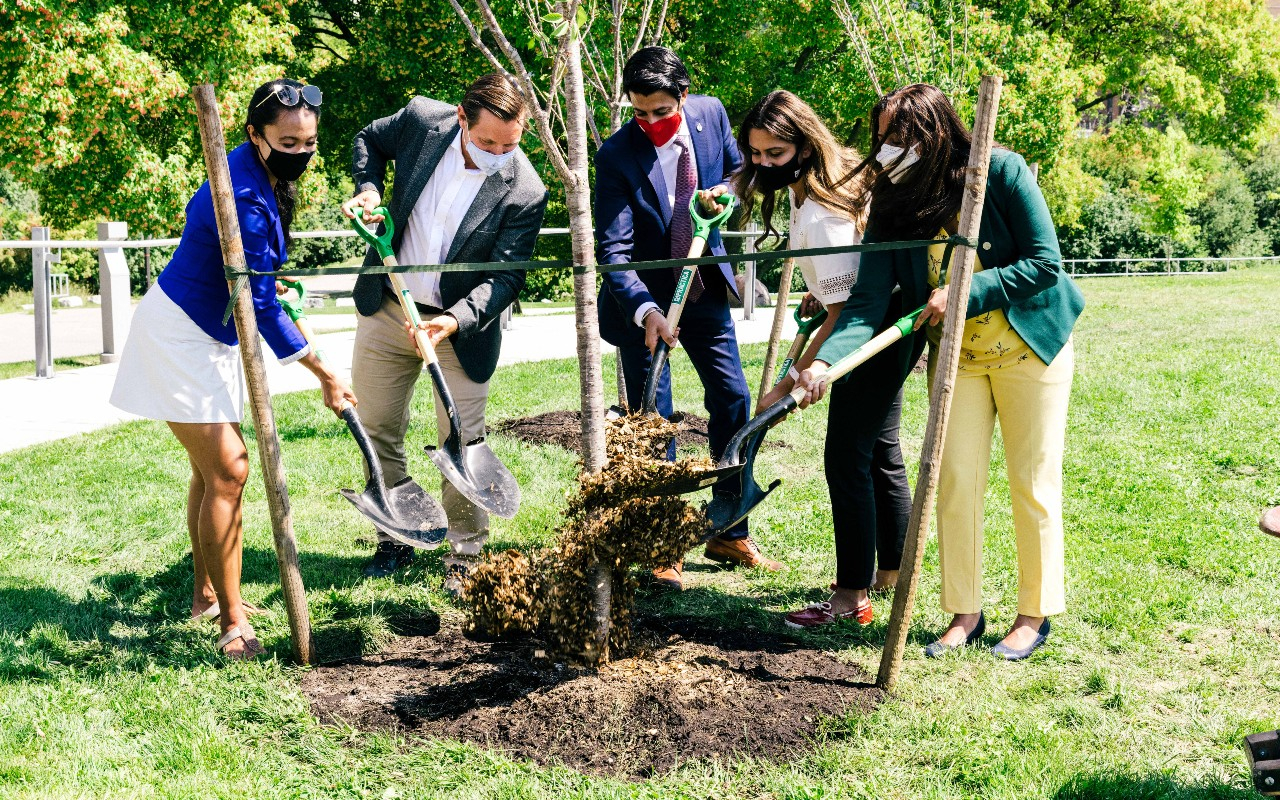 The City of Brampton will plant 8,000 trees over the next year to rehabilitate its urban tree canopy with help from the federal government.

On Wednesday, Brampton East MP Maninder Sidhu, parliamentary secretary to the minister of international development, announced $1.28 million in funding to the City of Brampton on behalf of Natural Resources Minister Seamus O’Regan. The investment supports the federal government’s plan to plant two billion trees over 10 years and the city’s goal to plant one million trees by 2040.

The funding will be used to plant trees along streets, in parks, on boulevards, in community areas, and in naturalization sites. The city will be matching the federal contribution, said Ed Fagan, director of parks maintenance and forestry for the City of Brampton, in a statement to Canada’s National Observer.

The federal dollars and an apparent increased focus on urban trees and urban nature is a positive step, said Lorien Nesbitt, an assistant professor at the University of British Columbia (UBC) in the department of forest resources management.

She thinks people are realizing the importance of urban tree canopies in the wake of extreme heat waves this summer. Increased shade, improved air quality, reduced flooding and runoff and human health benefits are all possible with a healthy canopy, but according to Nesbitt, it takes a lot of time and focus to properly manage.

“The significance of the investment will depend on what it's used for and whether it's used for changes that will lead to the long-term health of the urban forest,” said Nesbitt. “You can't plant a tree without also investing in the care for the tree.”

Although trees are often thought of as a way to help humans adapt to climate change, she said we also need to make sure we are planting drought-resistant trees, providing enough soil for them to grow to full capacity, and caring for them after planting.

“I would hope that investments in tree planting would come along with targets for tree survival, and then investments in urban forestry budgets, staff and programming in cities,” she said.

The City of Brampton is developing its first Urban Forest Management Plan and has planted almost 6,000 trees this year, according to its online tree-planting tracker.

Its One Million Trees program began in January, with plans to plant 43,000 trees per year, and adding an extra 7,000 every year to ramp up to one million by 2040. The majority of the planting will be completed by external contractors, who will be co-ordinated and managed by City of Brampton staff, according to Fagan’s statement.

While the funding and growing public education around the benefits of tree planting are great, these 8,000 trees are just a drop in the bucket, and we need to change how we develop land, said Danijela Puric-Mladenovic, an assistant professor of forestry at the University of Toronto’s John H. Daniels Faculty of Architecture, Landscape, and Design.

She said we need to prioritize preserving and connecting woodland areas and then introduce developments in a way that maintains those areas and doesn’t destroy the soil.

“We have to step back and see what we lost and are losing every single day with development,” said Puric-Mladenovic. “And if you plant those trees, yes, it’s good, but will they live long enough to achieve what they need? I don’t think so.”

She questions how the City of Brampton will measure the project’s success and who will be monitoring the health and survival of the 8,000 trees.

In his statement, Fagan said, “city staff will oversee all tree locations planted annually to monitor their health and recommend the necessary watering, mulching, pruning and fertilizing for the urban forestry section to initiate. The trees will then be placed on a seven-year pruning cycle where ongoing monitoring will continue.”

He also added areas with planting opportunities that will increase the effectiveness of climate mitigation, adaptation, and conservation goals will be prioritized.

“Other considerations when prioritizing sites include canopy coverage, equity considerations (such as resident income and accessibility) and heat vulnerability based on the Region of Peel's Heat Vulnerability Index Map,” his statement reads.

To best take care of the trees, Nesbitt recommends engaging the community and encouraging people to care for and water them.

A ministry spokesperson said Natural Resources Canada will “measure the number of trees planted and associated GHG (greenhouse gas) reductions,” as well as “the increase in forest resilience to climate change and human well-being co-benefits, such as jobs created and the number of communities and Indigenous organizations supported through the initiative.”

When the information becomes available, it will be shared publicly on the Natural Resources Canada website, according to the spokesperson.

When planting trees, soil quality and volume is critical, said Andrew Almas, an assistant professor in the department of forest resources management at UBC.

Because soil gets compacted when an area is being developed, trees can be planted in only one foot of topsoil, which isn’t enough for them to properly take root. This can result in trees needing to be removed after 15 years because they can’t get enough water or are wiped out by a big storm, he said.

Almas thinks the city will plant trees where it is convenient and easy, which isn’t necessarily where they are most needed.

Nesbitt said the areas where we need trees are often paved, so introducing them would require more time, resources, and a huge alteration of our streetscapes.

The 8,000 new trees will remove an estimated 35,500 tonnes of greenhouse gases over 50 years, according to Fagan, but for that to happen, the trees must survive.

Is the feds’ two billion trees program simply a path to more logging?