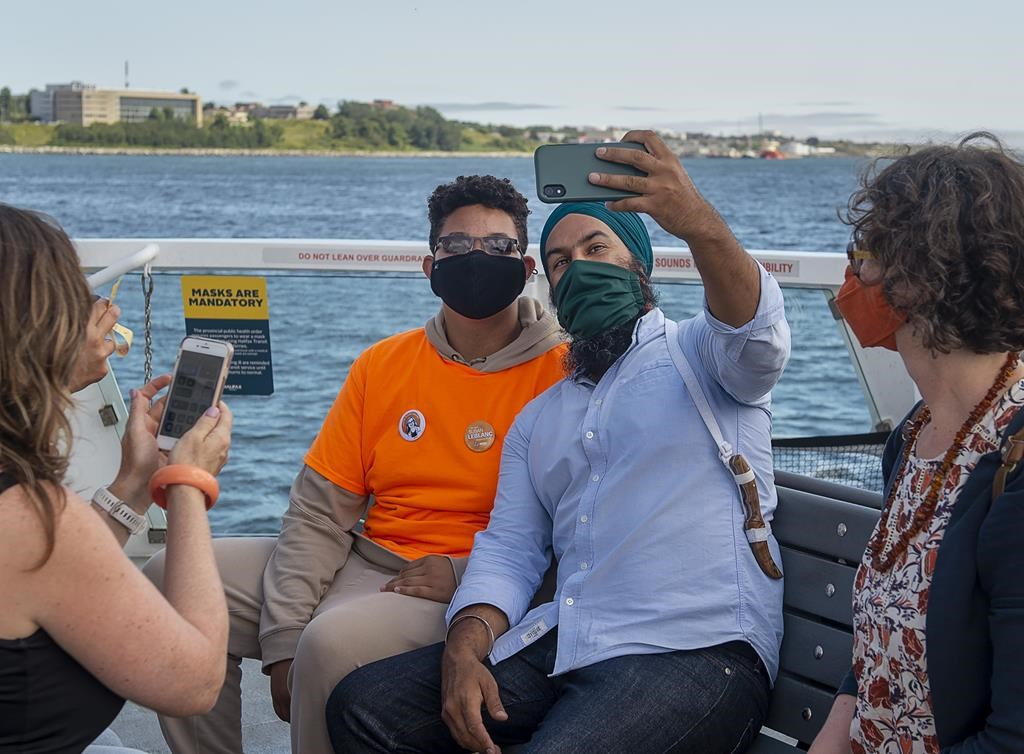 Federal NDP Leader Jagmeet Singh takes a photo with a supporter on the ferry to Dartmouth from Halifax on Wednesday, Aug. 11, 2021. Photo by The Canadian Press/Andrew Vaughan
Previous story
Next story

New Democrat Leader Jagmeet Singh unfurled a blueprint for the NDP campaign platform Thursday, doubling down on affordability and economic populism as federal opposition leaders criss-cross the country ahead of an election race expected to kick off Sunday.

Titled "Ready for Better," the 115-page document takes aim at high earners and big business while stressing social welfare in an echo of the NDP platform from two years ago.

“Tax the ultrarich to invest in people. That’s our plan. And really no other party is willing to say those words," Singh told reporters in St. John's.

Universal pharmacare, a $20 minimum wage and student debt cancellation comprise part of the proto-platform, which Singh calls"commitments for a New Deal for people" in a not-so-subtle nod to the state-led progressivism of former U.S. president Franklin Roosevelt. Canadians without private insurance would be able to access dental and mental health care programs, he said.

Singh also pledged a one per cent tax on households with fortunes topping $10 million and a temporary 15 per cent tax on large companies that enjoyed windfall profits during the COVID-19 pandemic.

He said the resulting revenue could fund the pricey promises, and that the party will work with the parliamentary budget officer to cost out portions of a more detailed platform. Thursday's action plan includes no accounting of projected costs or revenues.

"In all cases, we will manage debt and deficits responsibly, borrowing when required to rebuild and defend the services that Canadians and their families rely on, and moving to balance when it is prudent to do so," it states.

The document, with its emphasis on expanded health coverage and wealth-and-profit taxes, marks an updated version of New Democrats' platform in the 2019 campaign, when they lost 15 seats to leave them in fourth place in the House of Commons. But Singh expressed faith Canadians would find the smorgasbord of policies appetizing.

“Sometimes you look at items on that menu and you say, 'You know what, maybe I should have bought that thing last time.' And that's what we're hoping people realize," he said, stating that health-care and affordability issues have only become more urgent in the light of COVID-19.

He also highlighted NDP efforts to boost the wage subsidy and extend emergency benefits as New Democrats strive to distinguish themselves from a Liberal party that has also pledged affordable drug coverage and signed child-care funding deals — an NDP promise too — with eight premiers since the April budget.

Singh isn't the only opposition leader aiming to jump the gun on the federal horse race. Conservative Leader Erin O'Toole is also off and running, making whistle stops in at least seven provinces in the past four weeks.

On Wednesday in Waterloo, Ont., he laid out his plan to spur innovation by cutting the income tax rate in half on new patented technologies developed in Canada.

"Canada has all the great advantages that should make it the best place on earth to launch an innovative product and grow an innovative business," he said. "But far too often, Canada loses our best and brightest to places with fewer barriers and more opportunity."

On top of the slashed patent tax, O'Toole committed to fan investment in tech startups by establishing "flow-through shares," which allow the buyer to claim a tax deduction equal to the amount paid; to fix the "administrative nightmare" of Ottawa's Scientific Research and Experimental Development tax incentive program; and to establish the Canadian Advanced Research Agency to fund cutting edge technologies such as electric vehicles and carbon capture and storage.

The announcement followed a pledge Monday to connect every Canadian with high-speed internet by 2025, part of a broader plan to help rural residents.

Bloc Québécois Leader Yves-François Blanchet has dropped in on about 30 ridings over the past month as he looks to capitalize on wavering Tory support.

Prime Minister Justin Trudeau has also been jetting across Canada in recent weeks as he and his cabinet sign child-care funding deals with more than half the country's premiers and make a flurry of funding announcements.

Trudeau intends to visit Gov. Gen. Mary Simon on Sunday with a request to dissolve Parliament, triggering an election that would take place Sept. 20, according to a senior Liberal party source who spoke on condition of anonymity because they were not authorized to discuss the matter publicly.

Singh called the decision "selfish" but said New Democrats are ready for the race, including its policy component.

Within its first mandate, an NDP government would implement a guaranteed livable income for seniors and Canadians with disabilities as well as universal pharmacare and dental and mental health care, New Democrat officials said at a morning briefing.

Pocketbook pledges range from more affordable housing to a price cap on cellphone and internet bills and 30-year terms on mortgages insured by the Canada Mortgage and Housing Corporation.

An income tax hike of two points to 35 per cent for the highest bracket — now$216,511 and above — and a three-point hike on the current 15 per cent corporate tax rate are also planned.

Other promises include 10 days' paid sick leave for federally regulated workers, rapid reductions to greenhouse gas emissions and implementation of the Truth and Reconciliation Commission's 94 calls to action.