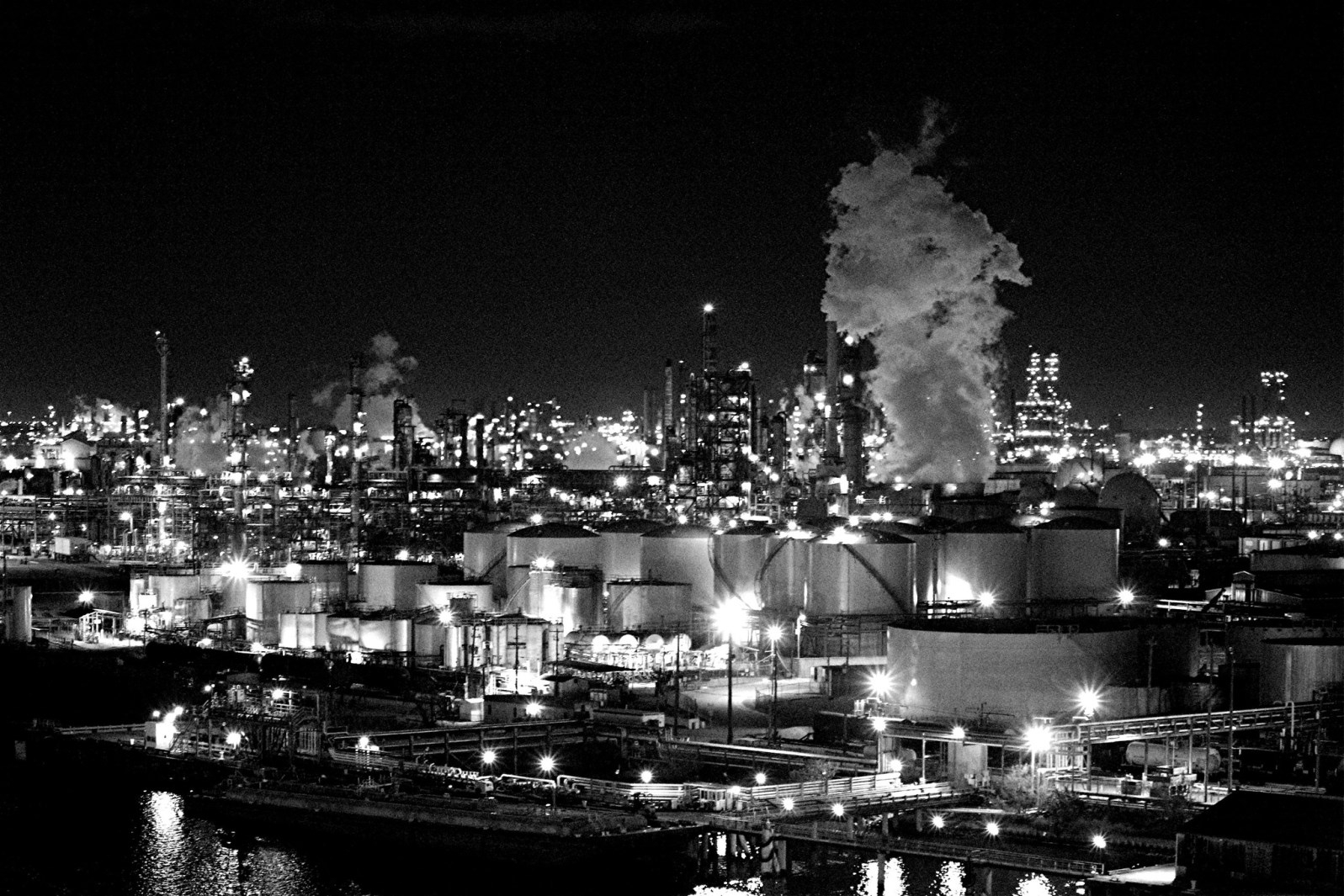 Night view of the refineries along the Houston Ship Channel from the Sidney Sherman Bridge. Photo by 2C2K Photography / Flickr (CC BY 2.0)
Previous story
Next story

ExxonMobil isn’t exactly known for being an environmental justice champion. But according to a scorecard published last week, the oil major is dead last among the S&P 500 companies when it comes to racial equity and environmental racism.

The scorecard was compiled by the shareholder advocacy group As You Sow, whose racial justice initiative aims to hold large corporations responsible for their contributions to systemic racism. It released an earlier version of the scorecard in March, evaluating the 500 largest publicly traded companies on 26 racial justice performance indicators — things like workplace diversity, promotion rates of employees of colour, and donations to organizations fighting for racial justice.

The evaluation’s results weren’t rosy for any of the S&P 500 companies — Microsoft and CVS, tied for first place, got a total score of only 60 per cent — but the energy sector stood out for its particularly bad performance. Overall, the sector scored an average of just three per cent, with seven companies’ scores dipping into the negative numbers — meaning that their actions had done more harm than good to low-income and non-white communities. Fossil fuel producers made up half of the scorecard’s worst 10 companies on racial justice, with ExxonMobil at the very bottom, along with other oil and gas firms like Marathon Petroleum and Valero Energy.

According to Knight, the energy companies’ low scores were largely attributable to the sector’s ongoing legacy of polluting non-white communities. Across environmental justice criteria, all the S&P 500’s 23 energy companies received scores below zero. ExxonMobil, for example, was penalized for its activities in Beaumont, Texas, where one of its crude oil refineries has regularly been in noncompliance with the Clean Air Act, spewing carcinogens into a majority-Black neighbourhood.

“Environmental racism is built into their business plan,” Knight said. “They have allowed all of these environmental violations to become just business as usual.”

In response to the report, ExxonMobil — which was given a negative-23 per cent score by As You Sow — told Grist it had a “rich history of support for equality, minority involvement in our business, and for minority education and minority-led business development,” citing contributions it made to an industry handbook for sustainable reporting guidelines.

The report also mentions Marathon Petroleum’s oil refineries near Black and brown communities in southwest Detroit, where vapour releases and chemical leaks have exacerbated local cancer and asthma rates. According to the government watchdog Good Jobs First, Marathon and its subsidiaries have accrued nearly US$1.5 billion in penalties for environmental, safety, and health violations since 2000. The company got a negative-17 per cent score from As You Sow. Marathon Petroleum told Grist that the scorecard was “based on incomplete information” about the company’s equal employment reporting and that it was committed to engaging with As You Sow and other stakeholders to discuss equity concerns.

The scorecard was compiled by the shareholder advocacy group As You Sow, whose racial justice initiative aims to hold large corporations responsible for their contributions to systemic racism. #ClimateChange #EnvironmentalRacism

Valero, which got 491st place on As You Sow’s scorecard, was criticized for a proposal that would have routed a natural gas pipeline through seven miles of 97 per cent Black neighbourhoods in Memphis, Tenn., avoiding majority-white suburbs in the north of the city. The proposal was ultimately cancelled, but the company drew further criticism for natural gas flares at its south Memphis refinery, which As You Sow said may contribute to the region’s elevated cancer rate, four times the national average. Valero Energy did not respond to Grist’s request for comment in time for publication.

Beyond its habit of putting polluting infrastructure in predominantly non-white neighborhoods, another reason the energy sector underperformed on the scorecard was what As You Sow called a “serious lack of diversity, equity, and inclusion disclosure.” According to the group’s press release, relatively few S&P 500 companies have made public extensive data on their workplace composition, retention rates, and hiring practices, making it difficult to evaluate the companies on those criteria. Most energy companies also failed to acknowledge systemic racism, make donations to racial justice organizations, or state that they were listening to Black employees, contributing to their low scores.

Knight expressed optimism that awareness of racial and environmental justice has grown since last summer’s nationwide protests over the police killings of George Floyd and other unarmed Black people, and that some companies have approached As You Sow for advice on upping their racial equity scores. But because of their core business model, she said, fossil fuel companies are lagging far behind. Oil and gas will always pose an environmental justice issue even if it’s not from localized pollution; their burning causes climate change, which is already harming non-white communities.

“There’s no way around their disproportionate climate impacts,” Knight said. “We don’t have time to beat around the bush — we need to fundamentally demand change.”

Canadians can read the

Canadians can read the following Suncor story on VICE — not on CBC or Postmedia:

"This ‘Woke’ Oil Company Has Been Illegally Polluting a Poor Latino Community" (Vice, 17.5.21)
"Oil giant Suncor vowed to fight racism in the wake of George Floyd’s murder. But it’s still releasing cancer-causing chemicals into a low-income Latino neighborhood north of Denver.
"Colorado’s only major oil refinery … in recent years has released illegally high levels of sulfur dioxide, hydrogen sulfide, hydrogen cyanide, nitrogen oxides, carbon monoxide, and particulate matter, according to state health authorities.
"… [Suncor's] oil processing facility exceeded pollution limits for hydrogen sulfide, carbon monoxide, and sulfur dioxide 15 times between March 27 and April 22 alone.
"Approving the permit would allow the Commerce City refinery to keep operating adjacent to a zip code that RealtyTrac determined is the most polluted in the country. It’s an area where 55% of residents earn incomes below the poverty level and 75% are non-white, according to the Environmental Protection Agency.
"… But Suncor not only wants to be seen as a good neighbor in Colorado. The company, which is the largest producer of tar sands oil in Canada, is also portraying itself as a fighter for racial justice. Its President and CEO Mark Little published a statement last summer in support of the Black Lives Matter movement, saying the police killings of George Floyd, Breonna Taylor, and Ahmaud Arbery resulted in 'a time of deep reflection for us.'
"Colorado activists say that’s rich language coming from a company that pollutes a low-income community of color.
"…Suncor is seeking permission to pollute even more.
"… But community members say the company’s poor record of health violations provides little reason for reassurance."
https://www.vice.com/en/article/n7bndx/suncor-oil-company-illegally-poll...