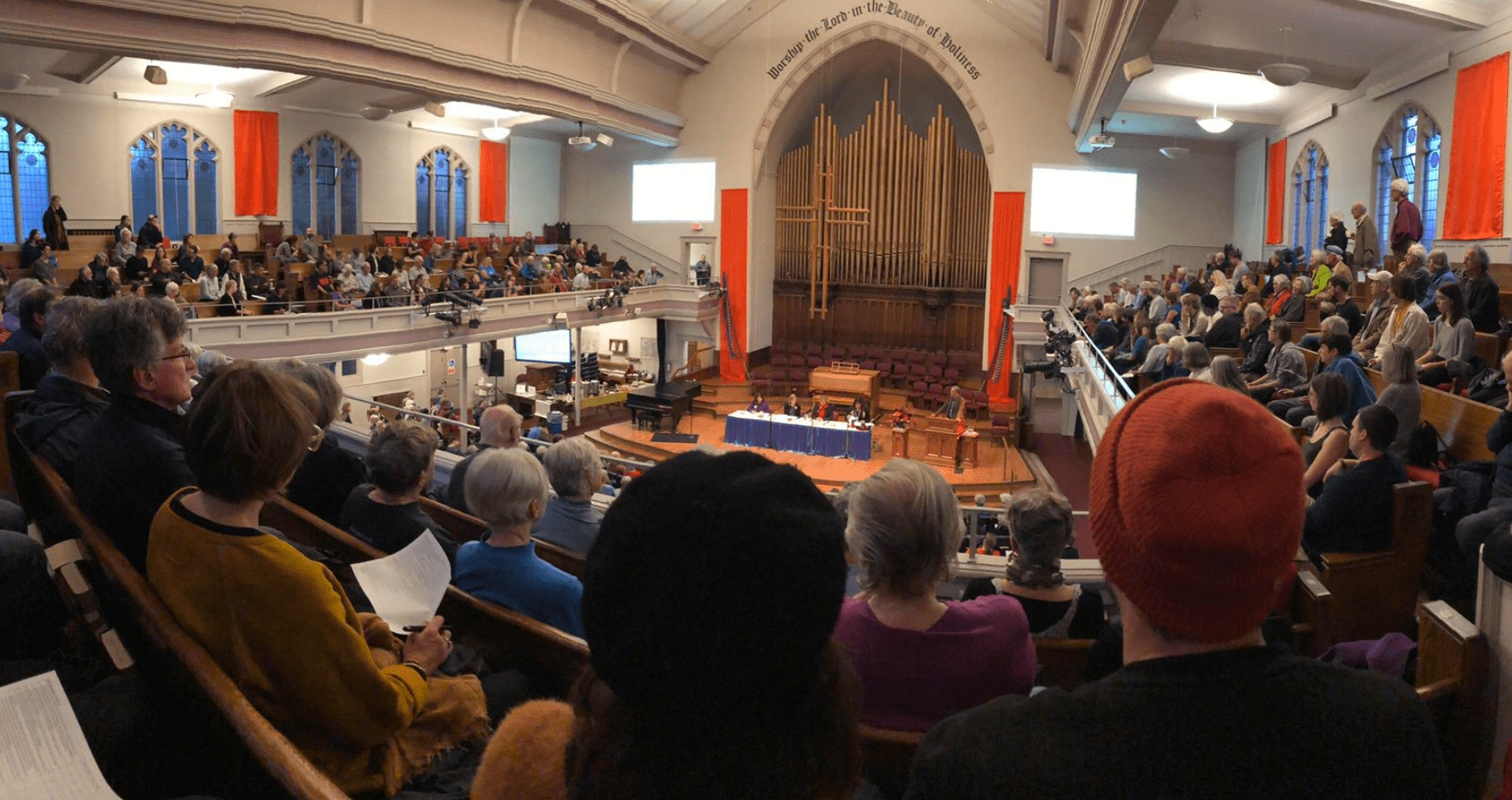 Hundreds of people showed up in 2019 to watch Victoria, B.C.'s environmental debate, part of the 100 Debates for the Environment event put on by GreenPAC and Équiterre. Photo from GreenPAC
Previous story
Next story

On Sept. 8 and 9, up to 100 debates on the environment will take place across Canada, giving voters a chance to see where their candidates stand on environmental policy.

100 Debates for the Environment, organized by GreenPAC, aims to facilitate as many non-partisan all-candidate debates as possible to draw attention to environmental issues.

So far, there are 75 confirmed debates in eight provinces. The snap election has made organizing more challenging, but GreenPAC executive director Sarah Van Exan said if anything, the number of debates organized on such a short timeline shows how much Canadians want to see climate and environment taken seriously this election.

“I think Canadians have tuned into the fact that there's an urgency to solving the climate crisis,” said Van Exan. “This election is one that cannot be wasted in terms of driving good leadership on that front.”

This will be the second time the 100 Debates event has run. During the 2019 election, GreenPAC and Équiterre partnered to put on 104 debates with the participation of over 400 candidates — 87 of whom were elected to office. (This year, Équiterre is not involved.)

The event was “a game-changer,” said Van Exan. Having 87 officials elected in 2019 who understood that a segment of their constituents expected environmental leadership and were prepared to be held accountable was a victory, she explained.

“It broke through the noise of that election campaign, it forced parties and candidates to stop and spend time preparing for these local conversations.”

This year, some of those candidates elected in 2019 will be partaking in the debates again, including incumbent Liberal candidate and Environment Minister Jonathan Wilkinson, who will participate in a debate on Wednesday.

“GreenPAC, essentially, is about highlighting some of the key environmental issues that are facing this country, which I think are a concern to the vast majority of Canadians,” Wilkinson said.

Providing a forum for voters to make informed decisions and for candidates to clearly communicate their policy plans are key, he added.

75 debates on the environment are confirmed for Sept. 8 and 9 in eight provinces. Over 100 debates took place in 2019 and @naxenavharas said the event was "a game-changer" that showed people's desire for strong environmental policy. #elxn44

Fifty-two per cent of Canadians are extremely concerned or quite concerned about climate change, according to a recent national public opinion survey from Abacus Data.

Julia Levin, senior program manager for climate and energy at the advocacy group Environmental Defence, says events like these can help bridge the gap between voters and candidates.

“It can be hard for voters to distinguish between climate platforms, and it's really important for voters to have ways to let parties know what their expectations are,” said Levin.

“These debates can do both of those things.”

According to Van Exan, there are still organizers trying to set up debates in their ridings before Sept. 8.

It’s not yet clear how many candidates from each party are participating in 2021.

In 2019, 96 candidates were from the Green Party, 94 were Liberal, 89 were NDP, and 20 were Bloc Québécois. Only 42 Conservative candidates participated in the debates, compared to 45 candidates from the People's Party of Canada (PPC), which continues to deny the existence of climate change.

This year, the PPC does not qualify to participate under the policy direction of the federal leaders' debates commission, but Van Exan said individual organizers “may decide to invite the PPC, independents, or candidates from other parties at their discretion.”

Canadians can watch the debates virtually and view a full list of participating ridings.

Right now, the number one thing individuals can do to tackle the climate crisis is to get involved and push for political action, said Levin.

“The fact that you can have 100 ridings — or however many they're at — across the country talking about the climate crisis is a really powerful message,” she said.

“When we see people mobilize as a community, that's powerful, and that's exactly what we need to let decision-makers know that they'll be held accountable, they can't get away with weak climate plans, and that this is a key issue for Canadians.”