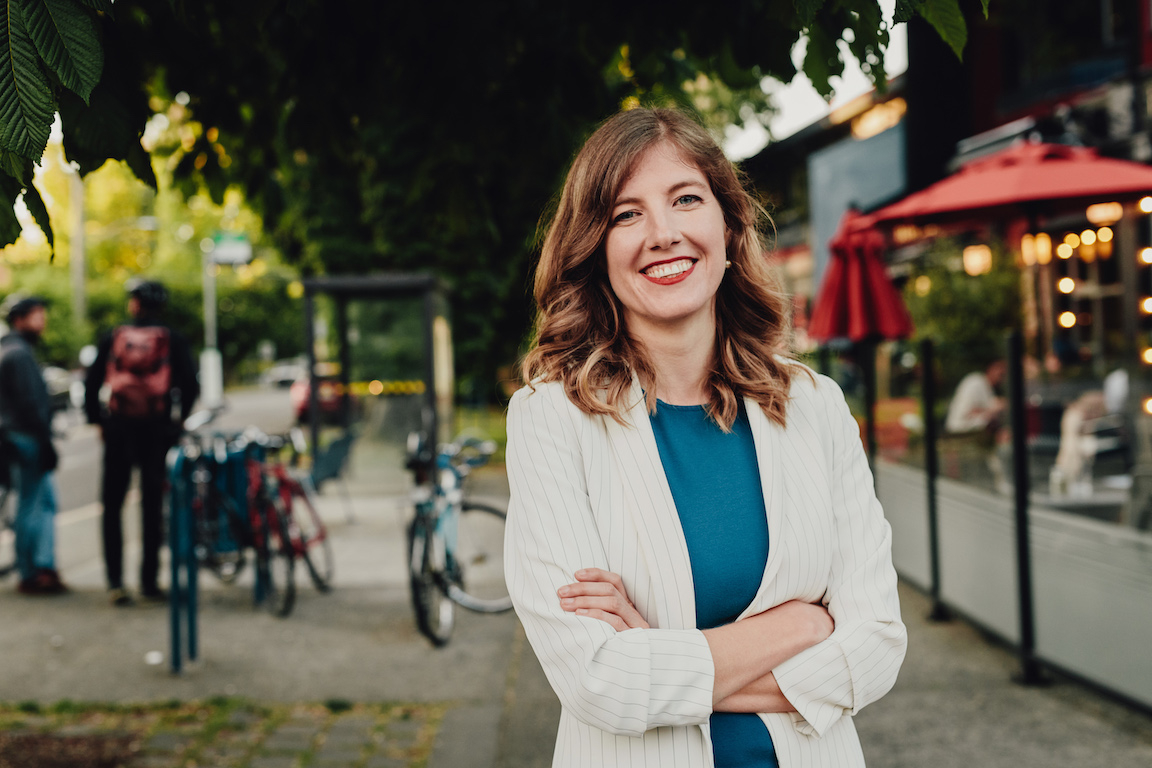 Environmental justice will be key to fight back against climate change, and the NDP will prioritize it, said federal NDP environment and climate change critic Laurel Collins. Photo provided by the NDP
Previous story

Canada’s National Observer asked federal NDP environment and climate change critic Laurel Collins about key issues in the upcoming federal election, and how Canada can respond to the climate crisis.

What is the No. 1 issue facing Canadians during this upcoming term?

The issue I have been working on the most, and that is always top of mind for me, is the climate crisis and protecting the environment. Canadians are seeing record heat waves, smoke from climate fires, displacement, flooding, extreme weather, and it is terrifying. It is devastating to see the impacts on communities.

What other issues are also going to be extremely pressing during the election?

We also think Canadians want their government to create a future where life is affordable and where the wealthiest pay their fair share. We are seeing completely unaffordable rents and housing prices and people can't afford to live in the community they grew up in. This is because of a lack of leadership from our federal government. We, as New Democrats, are committed to building 500,000 new affordable units and making sure those are green buildings. We've committed to a 20 per cent foreign buyers tax on top of provincial ones to ensure we're actually dealing with the root causes of high housing prices, one of which is speculative investment.

And, I think, especially right now as this country has been rocked by the uncovering of mass graves at residential “schools” and where Indigenous communities are being retraumatized after every discovery, it is so essential that our federal government stops just talking about reconciliation and actually does the work. That means implementing the calls to action from the Truth and Reconciliation Commission. That means implementing the calls for justice from the Missing and Murdered Indigenous Women and Girls report. It means actually investing in Indigenous communities, ensuring housing on reserves is safe and affordable, and that urban Indigenous folks have access to housing. We also have huge inequalities when it comes to racialized communities, which are disproportionately impacted by the climate crisis. When we are talking about climate solutions and investments in cities, we need to bring the lens of equity and justice.

When it comes to climate, where should Canada concentrate its efforts coming out of such a disastrous summer?

Right now, our targets are not ambitious enough. The IPCC report says globally we need to cut our emissions in half from 2005 levels by 2030, and Canada has refused to put our target in line with the top global scientists’ recommendations. The NDP would create a national crisis strategy and Climate Corps of young workers to help communities reduce and respond to climate risks. Another one of the big changes that needs to happen is to make sure we have carbon budgeting. This has worked in the U.K. and in New Zealand, year after year, to bring down emissions. We are the only G7 country whose emissions have risen since signing the Paris Agreement. We are clearly headed in the wrong direction, and our government continues to reassure us that we're headed in the right direction.

"The NDP is deeply committed to addressing environmental justice ... If we forget about fighting for justice and fighting inequality, we will not be effective in tackling the climate crisis," says @Laurel_BC. #cdnpoli #elxn44 #Election2021

What is Canada's path to net-zero emissions?

The NDP has a plan to create one million new good jobs to help rebuild local economies, while at the same time supporting vulnerable workers. We need to be investing in green infrastructure projects, we need to be building green affordable housing, and we need to be investing in transit infrastructure. Buildings are the third-highest emitters of greenhouse gases in Canada after the fossil fuel industry and transportation, so building heating and cooling is one of the areas we can make a huge impact. We have a commitment to retrofit all buildings in Canada by 2050. Transportation is another area where we can create really good jobs, strengthen communities, and reduce our carbon emissions. We have committed to support transit by permanently doubling the Canada Community-Building Fund and building out a public intercity bus program. We are also setting a target of net carbon-free electricity by 2030 and to move to 100 per cent non-emitting electricity by 2040.

Does non-green hydrogen produced from gas make sense to the NDP as a climate solution?

I have deep concerns about the government providing money to invest in solutions that are oftentimes helping big oil and gas companies expand fossil fuel production. We need climate solutions that are truly on the path to net-zero, and I think there's an important potential in green hydrogen, but we definitely need to be cautious when it comes to the proposals to burn more emissions.

I definitely am opposed to the subsidies that have been requested by oil and gas lobbyists for carbon capture and enhanced oil recovery. Until carbon capture is commercially viable, scalable, and directed towards taking carbon out of the atmosphere in a way that is not focused on expanding fossil fuel production, I think we have to be very cautious with relying on these kinds of technologies.

How does nuclear energy fit into the equation for you?

While we currently have nuclear power in Canada being used as a low-carbon energy source — and we are not proposing to shut those down — we are urgently needing to reduce our emissions before 2030, and many of these new projects require extensive consultation and years of approval processes. We have climate solutions that can reduce our emissions right now, and if we actually invested in retrofitting all of our buildings, invested in wind, solar, geothermal, building out our electricity grid, and creating interprovincial electricity transportation grids, we could make such a huge impact in this most critical decade.

What is the most important and time-sensitive step you think Canada needs to take to address the climate crisis?

How does the Coastal GasLink pipeline factor into these issues you’re talking about?

We have committed to ending all fossil fuel subsidies, and I think most of the pieces around Coastal GasLink are provincial. But when it comes to federal decisions, we need a federal government that takes the climate crisis seriously and isn't investing in expanding fossil fuel infrastructure and bankrolling big oil and gas companies.

How will the NDP ensure working Canadians are supported while the country grapples with a rapidly changing climate and economy?

We need a truly just and prosperous transition, and we need our government to be investing in creating good family-sustaining jobs in the low-carbon economy. And that includes all the things we've talked about, like investing in retrofits, investing in transit and transportation mode shifts, in green housing and green infrastructure. These are the kinds of solutions that create good jobs, take care of communities, support workers, and help us reduce our emissions. In 2019, this government promised they would implement a just transition act to support workers, and it was only two weeks before the election that they even launched a consultation about what would be needed for a just transition act. It honestly comes off as disingenuous. No wonder oil and gas workers in Alberta, Saskatchewan, and Manitoba are skeptical of this Liberal government. We need a government that invests in climate solutions at the scale that matches the climate emergency.

What makes your party best-positioned to tackle the challenge of climate change?

The NDP is deeply committed to addressing environmental justice. We need to tackle the climate emergency, we need to protect our environment, and we need to do it in a way that addresses the inequities that exist in our world. Indigenous communities are best placed to lead the fight against the climate crisis, and we have a lot to learn from the knowledge that exists in Indigenous communities. It is key to ensure all of our climate plans are grounded in the United Nations Declaration on the Rights of Indigenous Peoples. If we forget about fighting for justice and fighting inequality, we will not be effective in tackling the climate crisis. And if we forget about tackling the climate crisis and protecting the environment, we will not be effective in addressing inequalities ... Those two things go hand in hand.

This is the second in a weekly series of Q&As with each of the major federal parties in the lead-up to the Sept. 20 election. You can read the first instalment here.

Justin Trudeau promises $6B for health care. NDP says it’s heard that before

I sincerely hope the NDP mean

I sincerely hope the NDP mean it. What is the difference between planet health and human health? If they do not follow through for a VERY doable clean green economy, they should be removed immediately. Canada and it's usable, (farmed etc) land mass have the best opportunity on Earth to help us save ourselves. Applying that thinking would also stop our appearing like greedy fools to the rest of Earth's human inhabitants. Political parties and their ethic of greed to attract votes, will be our demise.
David R Derbowka (Davi Derbowka)

I wish the Greens would note

I wish the Greens would note that AP is all for carbon capture technology.