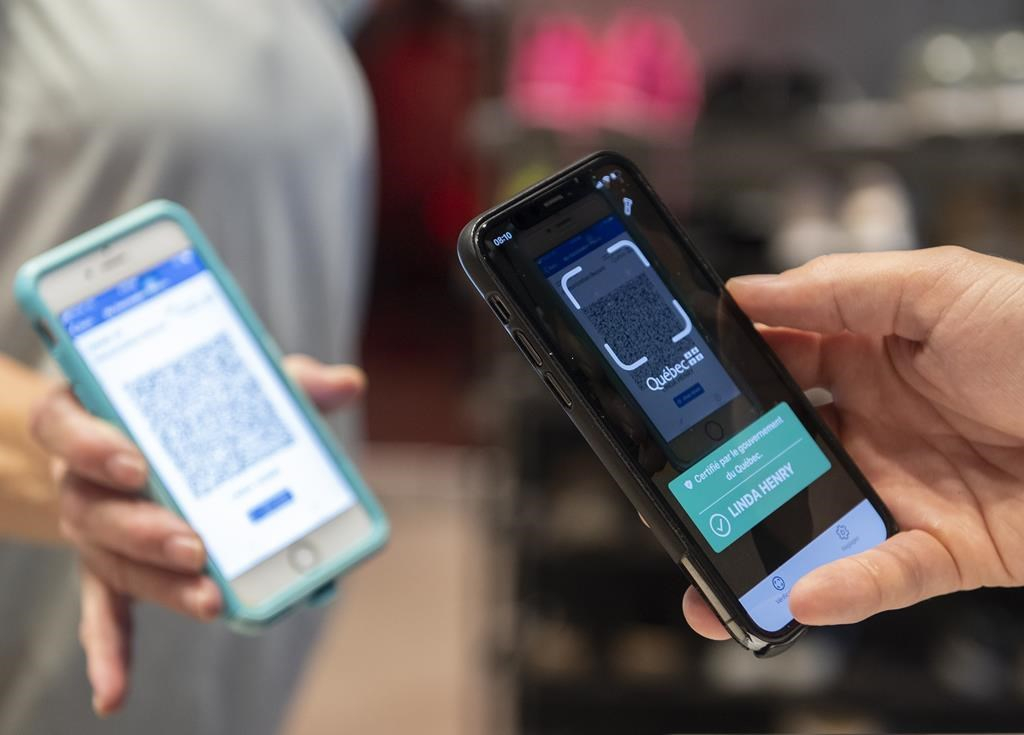 Linda Henry has her COVID-19 QR code scanned by Jonathan Gagne, manager of Orangetheory Fitness in Montreal, on Sept. 1, 2021, as the Quebec government’s COVID-19 vaccine passport comes into effect. Photo by The Canadian Press/Graham Hughes
Previous story
Next story

Quebec's vaccine passport system was launched on Wednesday, and while Montreal business owners said the day generally went well, they lamented the thought of turning potential clients away and increasing their employees' workloads.

Hamid Kiani, the owner of bakery and café Vasconia Boulangerie in Le Plateau-Mont-Royal borough, said he had already refused entry to several clients earlier in the morning because they didn't have evidence they had received two shots of COVID-19 vaccine.

"We lost three or four groups of people here because I asked them to show me their passport and they didn't have it," he said in an interview. "They said, 'We have our passport but it is not with us at this moment.'"

The government is requiring anyone in the province to show proof of vaccination to access businesses and events deemed non-essential, such as restaurants, gyms and festivals. Patrons are required to show quick response codes, or QR codes, issued by the government, which are scanned by a smartphone application. People from outside the province must show ID and a paper copy of their proof of vaccination.

Kiani said he posted a sign on his café's door informing people of the new health order, and he said he planned to print out a copy of his QR code and place it near the cash register so clients feel comfortable.

At Café Chez Téta, a Lebanese restaurant, co-owner Mélodie Roukoz said she also made a sign informing customers they need to have proof of vaccination and ID ready.

"Today, everyone was understanding and we didn't have any problems," she said, adding that she's worried the requirement could slow things down on busier days.

Roukoz said she had mixed feelings on the passport. While it will be an additional hassle for employees at a time when her business is already struggling to find workers, she also sees it as a way to keep her dining room from closing again this winter.

"I feel safe because I know that we're controlling things, or trying to control the COVID situation," she said. "Of course, we don't want to close our dining room again, so we'll do everything to stay open, for sure."

Health Minister Christian Dubé has said there will be a two-week grace period during which no penalties will be imposed for non-compliance. But starting Sept. 15, people and businesses caught violating the health order can face thousands of dollars in fines.

At bar Bistro De Paris, owner Claude Legault said scanning QR codes was easy and while some older clients didn't have their proof of vaccination, he said he was able to print out their QR codes on a computer in his office.

The vaccine passport is preferable to another lockdown, he said. "It's definitely better than closing, but we're going to lose a lot of money all the same," he said in an interview.

Closing time remains at 1 a.m. instead of the pre-pandemic 3 a.m., capacity is still limited and live music hasn't returned to his bar, he said, adding he expected he'll have to turn away some customers because they're not vaccinated.

Speaking to reporters on Wednesday morning, Premier François Legault said he believes Quebecers support the measure, noting 87 per cent of them have received at least one dose of vaccine.

"It means (they) approve the vaccine, support the vaccine, so I expect that it will go smoothly, but it may happen that the small minority will be unhappy, but I think that the vast majority of the population, they support the passport, they want a return to back to a normal life," he said.

Health officials said 80.8 per cent of people 12 and up in the province are considered adequately vaccinated.

This report by The Canadian Press was first published on Sept. 1, 2021.