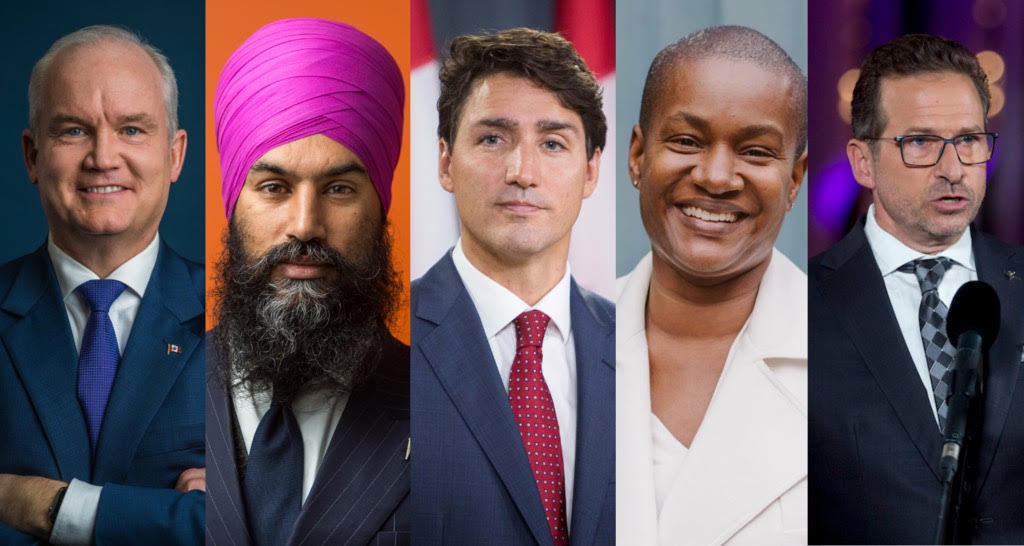 This article has been updated to include the most recent information available.

Climate change will almost certainly be top of mind in the upcoming election after a summer of intense heat waves has left apartment dwellers roasting with no relief and wildfires are sweeping through Ontario and B.C.’s rural communities.

A recent landmark report from the Intergovernmental Panel on Climate Change (IPCC) foresees a grim future with more of the same — and worse — if we don’t act now. An urgent call to action from the International Energy Agency (IEA) mapped out a path to net-zero emissions by 2050, but Canada has yet to meet an emissions reduction goal and the Paris Agreement climate targets may soon move out of reach without immediate and massive greenhouse gas (GHG) reductions, according to the IPCC report.

Here is where the Liberals, Conservatives, NDP, Green Party and Bloc Québécois stand on climate action.

Liberals up the ante on Canada’s climate target

Earlier this year, Prime Minister Justin Trudeau announced Canada’s new GHG reduction target will be 40 to 45 per cent below 2005 levels by 2030. Whether we will meet this remains unknown, and given the country’s track record, some have doubts. Canada’s emissions jumped 3.3 per cent from 2016 to 2019, according to a report from the Canadian Centre for Policy Alternatives, the Corporate Mapping Project, the Parkland Institute, Stand.earth, West Coast Environmental Law and 350.org. Trudeau’s new target fails to keep pace with the Biden administration’s commitment to a 50 to 52 per cent reduction by 2030. On Sept. 1, the Liberals released their costed election platform, which promises roughly $7.4 billion for climate initiatives over the next five years.

Conservatives catch up on carbon pricing

Earlier this year, a Supreme Court ruling put an end to legal challenges from the governments of Saskatchewan, Alberta, and Ontario that the federal government’s carbon pricing law encroached on provincial autonomy and was unconstitutional. After the release of Erin O’Toole’s climate plan in mid-April, all four major federal parties now support some variation of carbon pricing.

After the Supreme Court ruled the implementation of the Liberals’ carbon tax was constitutional, MP Laurel Collins, the NDP critic for environment and climate change, issued a statement saying, “The Liberals have staked their entire climate plan on the carbon tax,” which “isn’t nearly enough.” The statement decries the Liberals’ ongoing support of big polluters and calls for immediate investment in transit, energy-efficient homes and buildings, and clean energy. The NDP’s costed platform is expected to be released Sept. 11.

When Trudeau announced Canada’s new target of 40 to 45 per cent emissions reductions, federal Green Party Leader Annamie Paul told Canada’s National Observer those “unambitious targets” will be impossible to meet if the federal government continues to subsidize the fossil fuel industry and greenlight projects like the three offshore drilling projects recently approved off the coast of St. John’s, N.L. The Green Party released its election platform on Sept. 7; it has not been costed.

On Aug. 22, the Bloc Québécois released its 2021 platform complete with a pledge to end fossil fuel subsidies, pointing out that under the Liberals, fossil fuel subsidies increased beyond the Stephen Harper era. The platform says money from subsidies would be redirected to clean energies and research centres in Quebec while maintaining funding for Western Canada to transition away from fossil fuels.

None of these platforms are

None of these platforms are good enough... (well Green doesn't have one).
I don't trust CPC to take climate serious.
I don't trust Liberals to either.
NDP doesn't believe in nuclear which is a deal breaker as most would agree that it is a great source of carbon free electricity that is on 24/7.

Thank you for this. It's very helpful. Climate change should be the #1 issue this election but it won't be...

It is a real shame that the

It is a real shame that the federal Green Party has managed to become irrelevant at a time of climate emergency when they should be leading the way. None of the other parties will make climate change the #1 priority until it is far too late. The Green Party needs to be reborn, and it may require a disastrous election result to initiate that process.

I still think the Greens are

I still think the Greens are leading the way with those policies. Every candidate stands behind them. Not sure where the recent people came from who caused a commotion. They are few but loud.

Update - 28 Aug. And these people have now walked away, thank god. A new crew is in charge.
The Greens' "platform" was published months ago. Election campaign mechanics are so silly sometimes.
Mainstream media have not reported the good news about the Green Party, such as its installation of a very impressive Shadow Cabinet. Several strong candidates are running in various parts of the country.

Article: "A recent landmark report from the Intergovernmental Panel on Climate Change (IPCC) foresees a grim future with more of the same — and worse — if we don’t act now.'

1) "In a statement, Canada’s Environment minister Jonathan Wilkinson said the science makes clear countries have to do more to address climate change faster, adding Canada isn’t immune.
“Canada is warming at nearly twice the global rate. Parts of western and northern Canada are warming at three times the global average. Scientists have made a clear link between climate change and more frequent and powerful weather events, including heat waves, wildfires, flooding and sea ice loss.
“The report makes clear that we find ourselves at a critical time for international climate action."
Wilkinson highlighted Canada’s latest goal to reduce GHGs by 40 to 45 per cent below 2005 levels by 2030, and its plan to invest $5.3 billion on climate issues over the next five years as evidence the country is headed in the right direction.
“Reaching net-zero emissions is what the IPCC report reiterates the world must achieve if we are to keep 1.5 C within reach."
"In wake of IPCC report, Canadian politicians compete for the climate lane"
https://www.nationalobserver.com/2021/08/09/news/wake-ipcc-report-canadi...

2) "Wilkinson reaffirmed Canada's commitment to phasing out fossil fuels and achieving net zero carbon emissions by 2050, but said achieving that target will require money generated by fossil fuels.
"'Canada needs to ensure that in the context of that transition, it's extracting full value for its resources and using that money to push forward in terms of reducing emissions.
"'What we're doing is saying it's got to be part of the transition, but part of the transition is being able to raise the revenues that enable you to actually make the investments that are required to go there.'"
"Ottawa says it needs revenue generated by the Trans Mountain pipeline to fight climate change" (CBC, 9-Aug-21)
https://www.cbc.ca/news/politics/wilkinson-climate-report-1.6135502

Thanks for this review. The

Thanks for this review. The Greens are still the only party with a science-based plan.
Yes the leader has created a mess, which will not be resolved until after the election.
There are a number of strong candidates in ridings across the country, so GPC could have a handful of seats which would only help the progress towards climate action in a minority government if the Bloc and NDP stick to their principles and force the Liberals to up their game considerably.
(Just think if we had a real democracy provided by a fair (proportional) electoral system!!)

First things first, (End the Subsidizing of fossil fuels). effective Sept 21 2021.
This above all will start the ball rolling in the right direction.
At the very least a (step down plan) to end the subsidizing practice.

Very well written, and very well researched, and is giving me good food for thought!