Pandemic and health care the focus of first leaders' debate 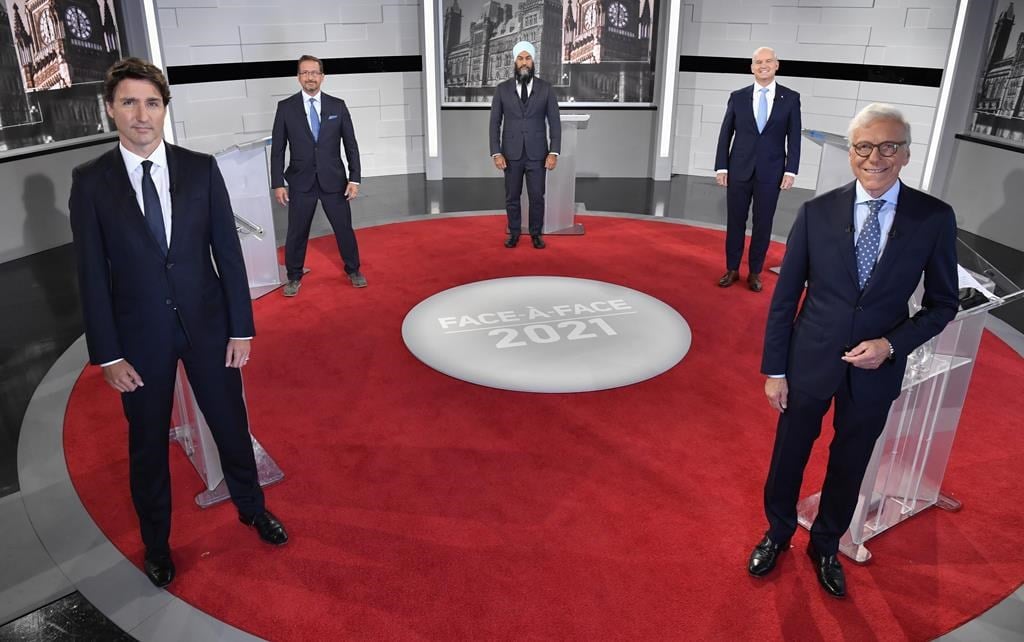 The French-language debate on TVA, one of the province's most-watched networks, comes at the midpoint of the campaign and could prove crucial to the outcome on Sept. 20 as Quebec becomes a three-way fight between the Liberals, Bloc Québécois and Conservatives.

The Liberals' Justin Trudeau, the Tories' Erin O'Toole, the Bloc's Yves-François Blanchet and the NDP's Jagmeet Singh took part, with the three opposition leaders accusing Trudeau of unleashing an election unnecessarily amid rising COVID-19 cases and a crisis in Afghanistan.

"Why did you trigger an election in the middle of a fourth wave?" O'Toole asked Trudeau.

"If you were in a majority government, would we be in an election right now?" Blanchet chimed in, saying a larger Liberal presence in Parliament was Trudeau's main motivation after six years at the helm.

"We’re in the middle of making decisions right now. Not in three months, not in a year," Trudeau replied.

His minority government was elected in 2019 before the pandemic struck and upended federal priorities, he said, necessitating a fresh mandate from voters.

"We must give Canadians the choice."

The debate covered three main subjects: the pandemic, social policy and “the Canada of tomorrow."

The Green Party's Annamie Paul and Maxime Bernier, leader of the People's Party of Canada, were not invited to participate.

O'Toole, who appeared calm in his first-ever federal election debate, took pains to show he supported the popular Premier François Legault on matters ranging from his pandemic leadership to a controversial multibillion-dollar tunnel project between Quebec City and Lévis.

But the Tory leader found himself dancing around repeated demands to specify the fate of the $6-billion child-care deal Trudeau announced alongside Legault before the election was called.

O'Toole, who has pledged to nix agreements with the provinces and replace them with a refundable tax credit of up to $6,000, vowed to convene the country's premiers within 100 days of Conservatives' forming government to "co-ordinate" on child- and health-care gaps exposed by the pandemic.

“What does ''co-ordinate' mean?" Blanchet asked.

O'Toole also got into a back-and-forth with the Liberal leader on health care.

He reiterated that his plan to boost federal health transfers to Quebec with $60 billion in funding over 10 years comes with no strings attached, while he said Trudeau's approach to long-term care amounts to "paternalism."

"Can you reassure Quebecers that you won't want a greater role for the private sector in health?" retorted an animated Trudeau, claiming O'Toole's stated respect for provincial jurisdiction permits a "two-tiered health system."

In 2005, the Supreme Court of Canada overturned the ban on selling private insurance for medically necessary care. The ruling applies only to Quebec.

Singh, who is pledging to abolish for-profit long-term care homes, weighed in as well: "Profits have effectively killed our elders. How can I stand with my arms crossed when I know this?"

At times, Blanchet played the role of moderator, questioning leaders on their commitment to defending the French language in Quebec while warning against "Quebec bashing" over its ban on religious symbols worn by certain public officials.

The debate also reignited a year-old dispute between Blanchet and Singh over the NDP leader calling a Bloc MP a racist.

Singh was removed from the House of Commons for the remark in June of last year, which came after Alain Therrien blocked a New Democrat motion to recognize systemic racism in the RCMP.

Blanchet pressed Singh to apologize for the comment during the debate, prompting Singh to launch into an explanation for his actions.

The pair spoke over each other repeatedly, with Singh saying Therrien had made a dismissive gesture.

"The word systemic racism became a weapon in the hands of Mr. Trudeau and Mr. Singh, using it systemically against Quebec," Blanchet told reporters in English afterward.

“I’m not worried about what folks call it — call it a system, call it an institution. It is clear that the Indigenous people of this country have been denied justice because of who they are," Singh said in English minutes later.

Near the beginning of the debate,Blanchet asked his three opponents if all their candidates are vaccinated.

Trudeau admitted to only one exception in his ranks, for medical reasons. Singh has confirmed that New Democrat contenders are vaccinated, as are the Bloc candidates. O'Toole dodged the question, repeating that Conservatives use rapid tests.

He said he also hopes to use them for federal workers, for whom Trudeau says vaccination will be mandatory.

“It is very important to have the daily screening tests for unvaccinated people … We must find a reasonable accommodation," O'Toole told host Pierre Bruneau who asked him if employees who refuse inoculation should be dismissed.

On the question of mandatory vaccination for all adults, Trudeau said: "We won’t force anyone, but we will limit the privileges of those who don’t want to be vaccinated without a good medical reason."

The leaders pulled up at the event on buses or vans in the early evening snaking their way through a small crowd of demonstrators outside the TVA building in downtown Montreal.

A heavy police presence presided over the streets surrounding the television studio where the debate took place Thursday night.

Several dozen protesters, most carrying flags of the Unifor and CUPE unions, alongside others from environmental groups including Greenpeace and Extinction Rebellion, faced police. Officers in caps and flak jackets stood guard behind metre-high steel fences, far outnumbering the megaphone-wielding demonstrators who chanted and held up placards in French reading, "Let's shut down the fossil fuel industry" and "Climate — time for action."

At one point, protesters lay on the ground after setting off red smoke canisters to symbolize wildfires and a sense of climate emergency.

The TVA debate was seen as pivotal in the 2019 campaign.

Then-Conservative leader Andrew Scheer's evasiveness on the issue of abortion and medical assistance in dying was widely viewed as halting early Conservative momentum, ultimately enabling Trudeau's Liberals to eke out a minority win.

The performance of Blanchet, a newcomer to federal politics at the time, was also credited with giving new life to the Bloc Québécois, which helped rob Trudeau of a second majority mandate.

Abortion did not come up Thursday, though the moderator pressed O'Toole on conscience rights generally and medical assistance in dying in particular. O'Toole said Canada needs a "sensible" approach to assisted-death requests that involve mental health.

Other topics included climate change, toxic masculinity in the military and the dire housing shortage in parts of the country.

Paul will participate in those debates, but Bernier, who didn't meet the independent commission's criteria for participation, will not.

This report by The Canadian Press was first published Sept. 2, 2021.