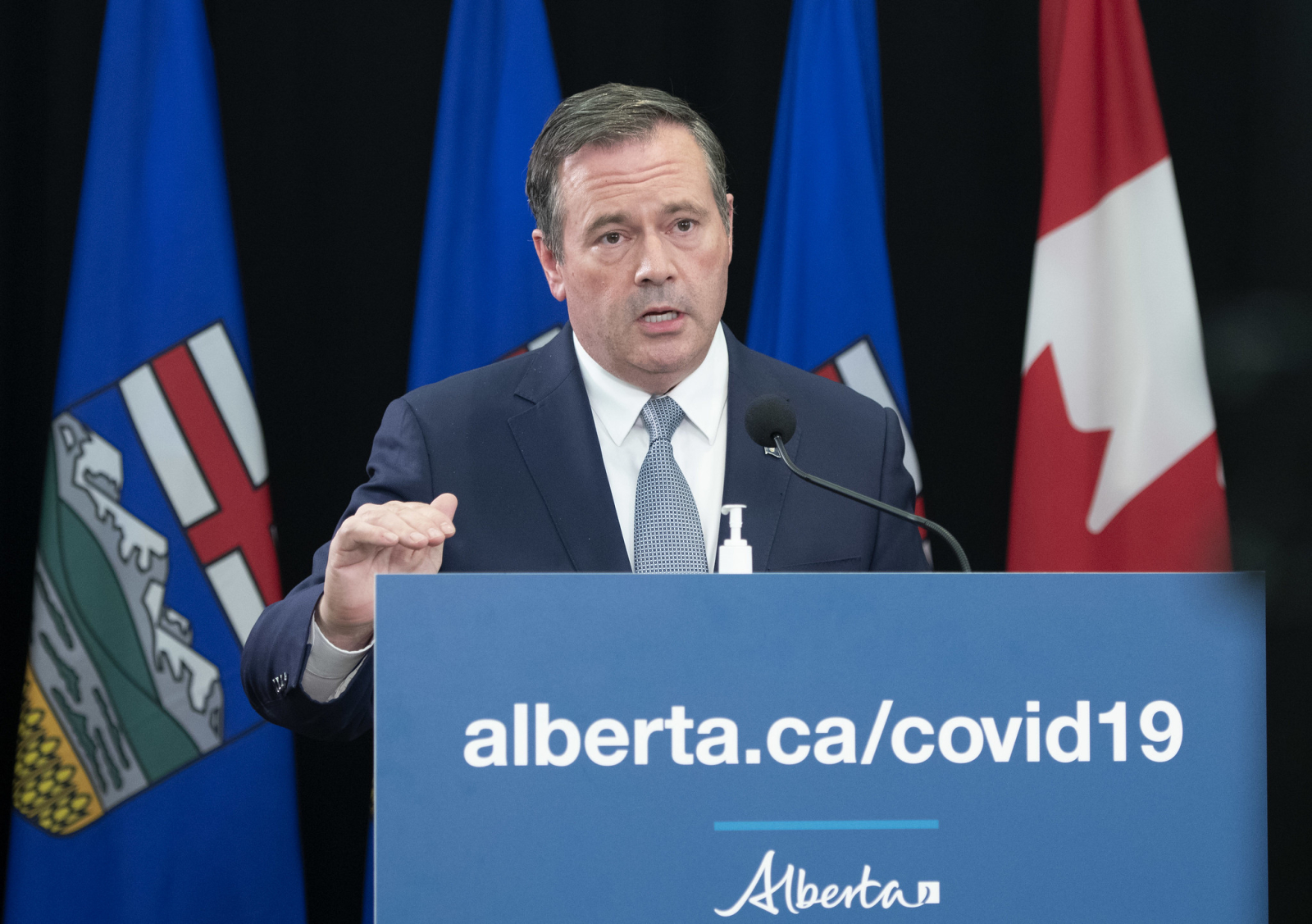 It’s hard to believe anyone in the United Conservative Party could find a silver lining in their government’s disastrous mismanagement of the COVID-19 pandemic. With emergency rooms and ICU units filled far beyond capacity, Alberta’s doctors are now preparing to implement the triage protocols that inform which patients get treatment and which ones die.

This gruesome reality has attracted the attention of the New York Times, which surely isn’t how Jason Kenney imagined his “best summer ever” ending when he was flipping pancakes at the Calgary Stampede back in July.

But for some UCP backbenchers, this generational crisis in the health-care system is apparently just the opening they were looking for to advance the idea of more private involvement in the system.

On Facebook, Lac Ste. Anne-Parkland MLA Shane Getson suggested the real issue isn’t his government’s suicidal “Open for Summer” strategy but instead the way Alberta Health Services responded to its inevitable consequences. “For this kind of money, and the amount we pour into the system, I think we need to be getting more bang for our buck,” he said. “ICU bed levels that were available for the public dropped unacceptably low coming into cold and flu season and a prediction of the (fourth) wave … the wave hit, but AHS didn’t staff the beds adequately to meet their own predictions?”

This is of a piece for the UCP, which seems determined to find new and innovative ways to demoralize this province’s front-line health-care workers. Never mind, for the moment, the fact this statement is in direct conflict with Kenney’s assertion the fourth wave was unpredictable and unknowable. And let’s try to set aside the ghoulish calculus here, which clearly suggests the best way to handle a pandemic is by letting it rip through the population and letting ICU beds handle the fallout.

It’s the financial calculus that’s most telling, since staffing up those ICU beds would come at a substantial cost borne by taxpayers. It’s conspicuously off-brand for a government that has consistently complained about the high cost of health care and repeatedly tried to cut the pay of the doctors and nurses. And it doesn’t align with its goal of reducing public-sector spending.

Why, then, is Getson complaining about the value Albertans are getting for their health-care dollars? It’s almost certainly because he thinks there are better ways — and perhaps better places — to spend them. “I’ll be asking a few more questions about our system,” he said in another Facebook post, “and providing some suggestions that we may want to discuss to make sure Albertans (are) getting the service they need because they are paying dearly for it.”

He’s not alone. Jason Stephan, the MLA for Red Deer-South, suggested the number of ICU beds in the United States is somehow proof we’re not getting value for our health-care spending. “Why, with this massive amount of money, has AHS only produced between 300 and 400 working ICU beds for a population of over 4.4 million, on a per capita basis less than half the worst of the lowest of any of the U.S. states?”

Stephan neglects to mention this additional capacity would come at an enormous cost, with per capita health-care costs in the United States nearly double those here in Canada. If the UCP wants to talk about efficiency and the need to get a better “bang for our buck,” the United States is the last place it ought to be looking. According to a 2020 study published in the Annals of Internal Medicine, “The gap in health administrative spending between the United States and Canada is large and widening, and it apparently reflects the inefficiencies of the U.S. private insurance-based, multi-payer system. The prices that U.S. medical providers charge incorporate a hidden surcharge to cover their costly administrative burden.”

But maybe introducing more private activity in the health-care system isn’t actually about reducing costs and improving efficiency. Maybe it’s about shifting where those dollars are spent — and whose pockets they ultimately flow into. That would certainly align with the UCP’s worldview, not to mention the financial interests of some of its supporters. And it might help explain why Kenney stood by idly as his province’s health-care system careened towards collapse. After all, if you want to rebuild something in a different image, you have to break it first. In that respect, at least, the UCP’s management of the pandemic has been an unqualified success.

If there’s any good news here, it’s that the UCP is too busy trying to dig itself out from under the weight of its own incompetence to do anything else. But the trial balloons being floated on Facebook by its backbench MLAs are still worth our collective attention. The stealth privatization of health care has long been the holy grail for Conservative politicians in Canada. And Kenney is nothing if not a man of faith.

I wrote that Ford is using

I wrote that Ford is using criminal neglect of Ontario's schools and children ( class crowding, no rapid tests, no mandatory vaccines for 12 and up) to destroy confidence in public schools and drive wealthy to private ed. same political play book as Kenney bcs same behind the scenes backers. Americans have maxed out stripping public health and education in America and look to Canada for fresh sources of public cash. This has been analyzed thus for decades, but it just rolls on, with deliberate? failure in MSM to offer any meta analysis for the seemingly incoherent or incompetent (lack) of governance. The true enemy stays hidden and citizens stay bewildered at the incoherent governance.

Kenney's indifference to public health care is obvious in this province, but for those of us not on Facebook, thanks for the comments from conservative backbenchers.....those penny pinching concerns that we aren't getting a good enough 'bang for our buck'.........as if health care were a form of prostitution........point to an age old right wing solution to just about everything.

Let the private sector do it.......for efficiently managed maximum profit.........and then we won't have to pay taxes for those services. That was the ticket that gave us the horrors of privatized long term care, and they put it in place very quietly, to little citizen opposition. That was the small coin behind O"Toole's declaration during the recent election that he wouldn't put conditions on federal transfers to provincial health budgets, because....??? He didn't want to get in the way of a province's capacity for 'innovation' (read privatized serviced).

Young and healthy millennials may fall for it, though as the health issues that accompany rapid climate change accelerate, they will live to regret it. The real work we have in front of us is keeping those greenhouse gas emissions down: imagine a for profit health care system, going forward into an increasingly hot house earth!!! "If religion was a thing that money could buy./the rich would live, and the poor would die" as the old spiritual goes. Replace religion with health care and you've got Mr. Kenney's actual faith system.

With only massively efficient corporations, like the ones intent on clear cutting the last of our old growth forests, to take care of us, Armageddon will certainly be nigh.

Past time to replace these old superstitions with actual science. And a real economy run by the people who do the work. Socialism anyone???

While it may be true, as

I'm sure I'm not the only one

I'm sure I'm not the only one here who experiences real cognitive dissonance as to how and why such truly horrible people have gained ANY traction whatsoever in our society, let alone won power to govern. Surely many others are shocked to see what is relatively new in Canada--a complete affinity with and a casual capability for deceit and deviousness.
No one talks enough about how thoroughly dispiriting it is as a human being to see the manufactured, mythical version, the supposedly "holy spirit" of religion inveigle its way into our politics as if it were an even remotely reasonable context for any modern society.
I think that despite the obvious effectiveness of childhood indoctrination, it still requires constant effort and affirmation to maintain the implanted/treasured delusion, the extraordinary claim, and what better sanction or platform than the power of elected government? A government that you are actually dedicated to decimating in the guise of championing private enterprise, but which is actually a trojan horse for supplanting the rule of law with your alternate authority of a deity that is originally derived from your own "beliefs" in that and the alternate reality attached to it? In a supposedly "secular" society like ours, it is best described as "the love that dare not speak its name." Does this not go a long way toward explaining Kenney's personal AVIDITY at least, which is considerable, having propelled him into leadership when he's not actually a business person at all, just happens to really like those kind of guys, AND the power proxy of "God." Jerry Seinfeld talked about most men being "low-level superheroes in their own minds," but let's be honest, these religious guys are actually low-level gods in their own minds....
On the covid front, Kenney's striking lack of empathy or even real concern also portrays him as a possible psychopath. Probaly not just coincidence that many CEO's are considered psychopaths; those kind of people are the ones with the required drive to win at any cost. This might be seen as the main reason to get rid of FPTP, to dethrone these guys and save ourselves.

Well, a corporation is a

Well, a corporation is a 'person' in the eyes of the law - and in most (all?) cases, in terms of psychopathy, a truly sociopathic one at that. Hey everyone, I've got a great idea, let's let sociopaths run our society. Oh, wait, no, not original, apparently Mr. Reagan and Ms. Thatcher and Mr. Friedman have already thought of that. Better yet, let's just get governance out of the way and use words like 'magic' to describe the side-effects (we'll call benefits) that may fall out (can we say gently trickle down?) from their sociopathic behaviour.

Good point about the

Good point about the corporate model leading the way all the way on this. It finally even reached the public library where I used to work, becoming something for management to hide behind to whip people into shape with, but at a remove. People LOVE the "remove" because most simply can't handle the raw reality of life. Hence the enduring appeal of religion, a continuation of dependent, vulnerable childhood where most of us were hard-wired to lean toward what is biggest and most powerful for protection.
Language is so huge in all this. As a poet I'm struck by just how intimidated most people seem to be by any language that deviates from common usage; most just want that "nailed down" feeling so they don't have to actually THINK afresh. It's why people don't generally LIKE poetry, which is charged with "making it new." Jung said "thinking is hard; it's why most people prefer to judge."

We might actually see change if politicians hired poets who are, after all, the "unacknowledged legislators of the world."