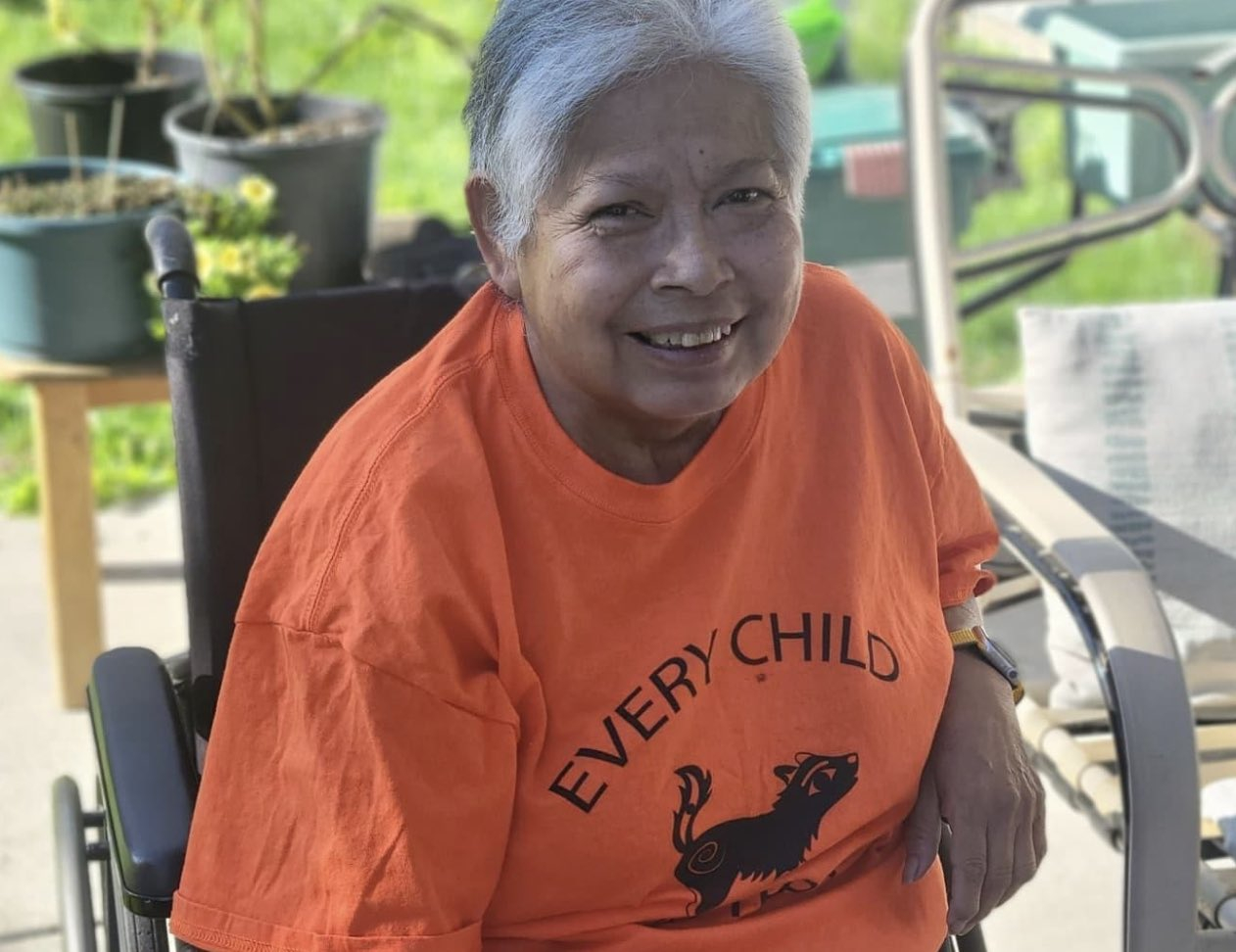 As a family, we have been at the receiving end of almost everything Canada did to First Nations people, and my mother saw it all, writes Robert Jago. Photo via @rjjago / Twitter
Previous story

In my family, the older aunts and uncles tell a story about “the oven baby.” “That was Maryann,” my Aunt June tells me. This conversation is back in the summer of 2018, on the Katzie First Nation reserve in B.C.

“The one who had a hole in her back,” my mother chimes in.

“She had some spinal disease, it was like about that big [gesturing to show her palm], almost bigger than the rest of her, and they used to keep her in the oven to keep her warm,” June said.

They explained to me that it was a wood-burning stove, with a small, cloth-lined drawer.

My grandma had a baby every year for nearly two decades throughout the ’50s and ’60s; I have a lot of aunts and uncles. And like all of them, Maryann was born at home.

Giving birth at home wasn’t a choice. While Canada doesn’t keep statistics on home births, statistics from the United States show that only about one per cent of births were at home by the mid-1950s.

First Nations people like my grandmother gave birth at home because they were denied access to regular hospitals.

Canada’s white population didn’t want First Nations people in their hospitals. A typical example of this disdain for us comes from a meeting of the Victoria Jubilee Hospital Board, where a board member stated: “Indians were unclean and they hurt the hospital.” That hospital board went on to ban First Nations patients unless they paid in advance, and at a rate higher than what was charged to white people. It’s something that many other hospitals did across Canada, forcing the Department of Indian Affairs to create its own — albeit substandard — medical system.

While they were technically called “Indian hospitals,” they had all the hallmarks of a residential school or a prison camp.

The Indian hospitals were places where medical experiments were performed on children without the consent of their parents, where First Nations people were imprisoned against their will, and where it was a crime to refuse any treatment that was ordered for you.

The result was that Grandma Mary was left to her own devices to bring her family into the world. Her husband, my grandfather, was a fisherman, and was away at sea 11 months out of the year, so she made her little nest in her room, and she did this all alone.

Grandma Mary had a procedure for giving birth. Before she was due, she would take everything she needed into her bedroom: water, towels, and according to June, “a new pair of scissors ... she never used for anything else.”

The night Maryann died, back in 1950, Grandma was with her. Crouched by the oven, she fed it wood to keep the baby warm.

As the night wore on,

and as the fire went out, the baby died.

The genocide doesn’t begin and end with the residential schools. Maryann was born, and died, off reserve.

My family is one of many that fled the reserve to escape federal control. After having gone to residential school themselves, my grandparents decided it was in the best interests of their family to flee. They gave up their home, the plot of land that has been in our family for generations, and left to live as refugees in the small fishing village of Steveston, B.C.

This is another part of the genocide.

Letting “the oven baby” die won the land for Canada, it built the railroad, cleared the Prairies, re-natured the parks and pumped clean water into every home in the country, or every one of YOUR homes.

There are so many different parts of the genocide that we mark today, and too many of them are still going on.

The residential schools are closed, the Indian hospitals are closed — but still many First Nations women choose to give birth at home, in secret, to escape the newer forms of oppression, like so-called birth alerts. These are orders a provincial child welfare agency gives to a hospital, so that they are informed when a baby is born to a targeted mother. The agency then goes in and, in nearly a third of cases, seizes the child. In B.C., where First Nations people make up six per cent of the population, nearly 60 per cent of those seized under birth alerts are First Nations.

My mother Virginia Jago was born at home. She died this past week. She is too many things for me to say here, other than to say that her death has broken every piece of my heart. She was 64, and she was due so many more years with her family. But decades of poverty, and everything that came from that, took those years from us.

On my mother’s last day with us, she spent it surrounded by her grandchildren. It was her granddaughter’s birthday. Her granddaughter shared the name of my sister who died as an infant, and so was especially beloved by my mom. That day, in spite of years of health problems, she was as happy and healthy as I had seen her in years.

In the final picture of her, she was wearing her orange “Every Child Matters” shirt.

As a family, we have been at the receiving end of almost everything Canada did to First Nations people, and my mother saw it all. Many of our family went to residential schools, my mother lost brothers and sisters to the 60s Scoop, others like Maryann, to discrimination in medical services.

We have lost so much, and to be with family and to see all of us together meant so much more to her — because she felt the meaning of those three words: Every. Child. Matters.

We gave her this shirt to wear in her casket, as a reminder of how happy she was at the end, and how it was being with her grandchildren that completed her. I shudder to think of the countless First Nations families that were denied this solace because their children were taken and were never to return. As if taking the land wasn’t enough, this most elemental bit of happiness — being with your grandchildren — was expropriated as well.

These are some of the Truths. But what about Reconciliation — the other half of what we are marking today?

Just as you can’t put out a fire with a blowtorch, you can’t reconcile with people who are still hurting you. Métis lawyer Breen Ouellette has observed that at the root of all the oppression heaped upon Indigenous peoples is Section 91(24) of the British North America Act — the act that created Canada. This section grants the federal government the exclusive right to make laws for “Indians” and our lands.

Every piece of land stolen from us, every child sent to residential school, every underfunded school, forced sterilization, every litre of toxic waste dumped on to reserve — everything, all of it, begins with Section 91(24). That section, what Ouellette calls “legislated apartheid,” is the line that divides reconciliation from oppression. While it remains a part of the Constitution of this country, this country continues to be an active oppressor of our people.

The time has come to cross that line — that is how Reconciliation begins. Non-Native leadership in Canada must separate themselves from those who have harmed Indigenous peoples. Justin Trudeau and even Stephen Harper have shown the ease of saying the right words to mollify people — and both have gone back the next day to oppressing Indigenous people. But we don’t need more words, we need fewer — specifically, we need to remove Section 91(24) from the Constitution.

Removing that part of the Constitution won’t fix things overnight — but it will remove the legal foundation for our oppression. Doing this will distance the Canadians of the future from those who have done so much harm.

On this day, we need to look at the Truth and the heartbreak. I wish you could know what I feel and then magnify that a million times for each person affected so that you can see the scale of pain that is the genocide of our peoples. With that knowledge, it would become imperative for every person to demand that we break with what came before and move forward. In the name of ourselves, of the country, and of the children.

If you want to make a difference, consider donating to the First Nations Child & Family Caring Society, which helps support equity for First Nations children and young people, and reconciliation-based activities for all children in Canada.