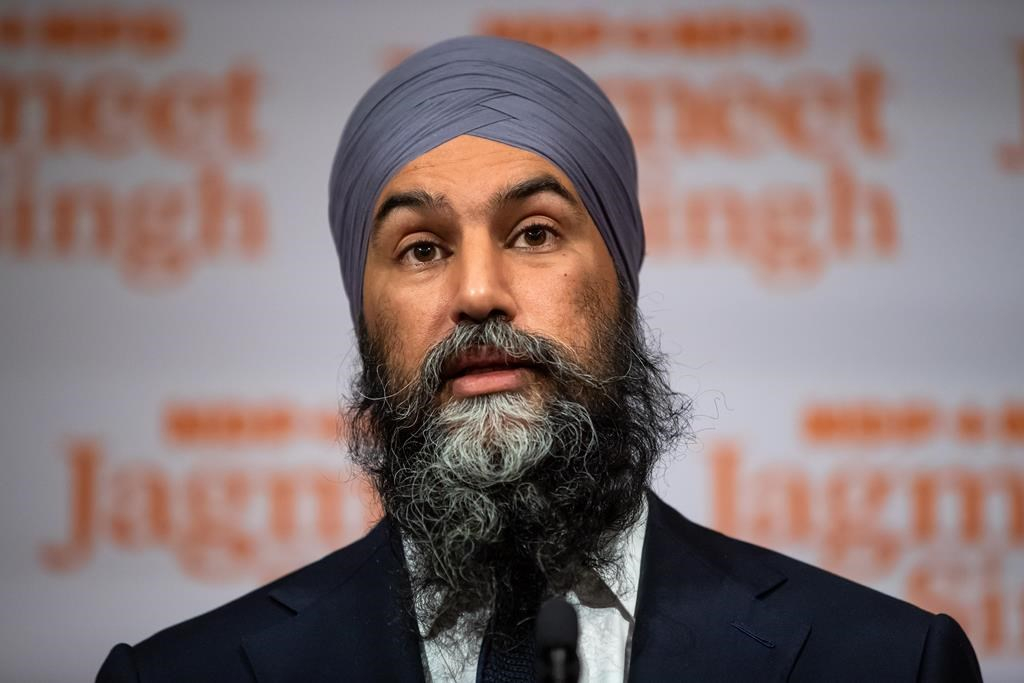 Jagmeet Singh is to tell the first meeting of the NDP caucus that pursuing Indigenous rights — including access to clean drinking water — will be a key priority for the party in this Parliament.

The first meeting of all New Democrat MPs since the election will take place in Ottawa on Wednesday afternoon.

Five new MPs will be introduced at the caucus meeting, including Blake Desjarlais, a two-spirit Métis leader, who defeated the sitting Tory in Edmonton Griesbach. The NDP returned 25 MPs — one more than last time — and was the only major party to increase its share of the vote.

But Singh may face questions from some MPs at caucus about why the NDP, which spent $25 million on the campaign, did not perform better across Canada.

The party came a close second in a clutch of ridings, but failed to break through in Quebec or in the Greater Toronto Area, despite favourable popularity ratings for Singh.

The NDP is conducting a review to find out why the campaign failed to make greater gains, even though Singh criss-crossed the country, visiting dozens of target ridings, and meeting voters from many different backgrounds.

But NDP experts predict that — despite some grumbling in the party about a poorer than expected showing at the polls — Singh will not face a challenge to his leadership.

Karl Belanger, a former senior NDP adviser, said the party would need to improve its messaging and organization on the ground to convert close seconds into wins next time. He said questions were likely to be raised by MPs about strategy and messaging at the party’s first caucus since the election.

“I’m not hearing any revolt or anything like that. I am sure people will raise concerns about what happened in the campaign. I think there are going to be questions that Singh was not able to capitalize on his own popularity, and couldn’t break through in the GTA,” Belanger, president of Traxxion Strategies, said.

Singh to tell caucus that Indigenous rights a priority for NDP this Parliament. #CDNPoli #NDP #IndigenousRights

In 2011, the NDP rode a so-called orange wave, returning the largest number of seats in its history. It formed the official opposition for the first time. In the 2015 election the NDP won 44 seats, compared to 24 in 2019, Singh’s first campaign as NDP leader.

At Wednesday's caucus meeting Singh will address the 25 MPs elected, outlining priorities for the NDP in the new session of Parliament — including highlighting Indigenous issues, action on climate change, and a wealth tax for Canada’s super rich.

Melanie Richer, Singh’s director of communications, said he would stress the need for the NDP to continue to press for Indigenous rights and reconciliation. She said the NDP leader would likely tell caucus he wants “get to work on clean drinking water — that is one of the most pressing issues — a big one for us.”

The NDP is expected to use its leverage with the Liberals’ minority government to apply pressure to pursue pharmacare, to give Canadians publicly funded pharmaceuticals.

Peter Julian, NDP MP for New Westminster-Burnaby, said the caucus would continue to press on the issue of tax avoidance by the wealthy, as well as the cost of housing and action to combat climate change.

He said the fact the Liberals have returned with a minority government, meant the NDP has leverage to push forward policies such as a wealth tax for the “ultrarich,” and continuing financial supports during a fourth wave of COVID-19.

Julian added that help for people with disabilities was an issue the NDP “would continue to champion” in the next Parliament.

“We hold the balance of power as does the Bloc. We were able to leverage a whole range of initiatives (in the last Parliament),” Julian said. “And that will continue.”