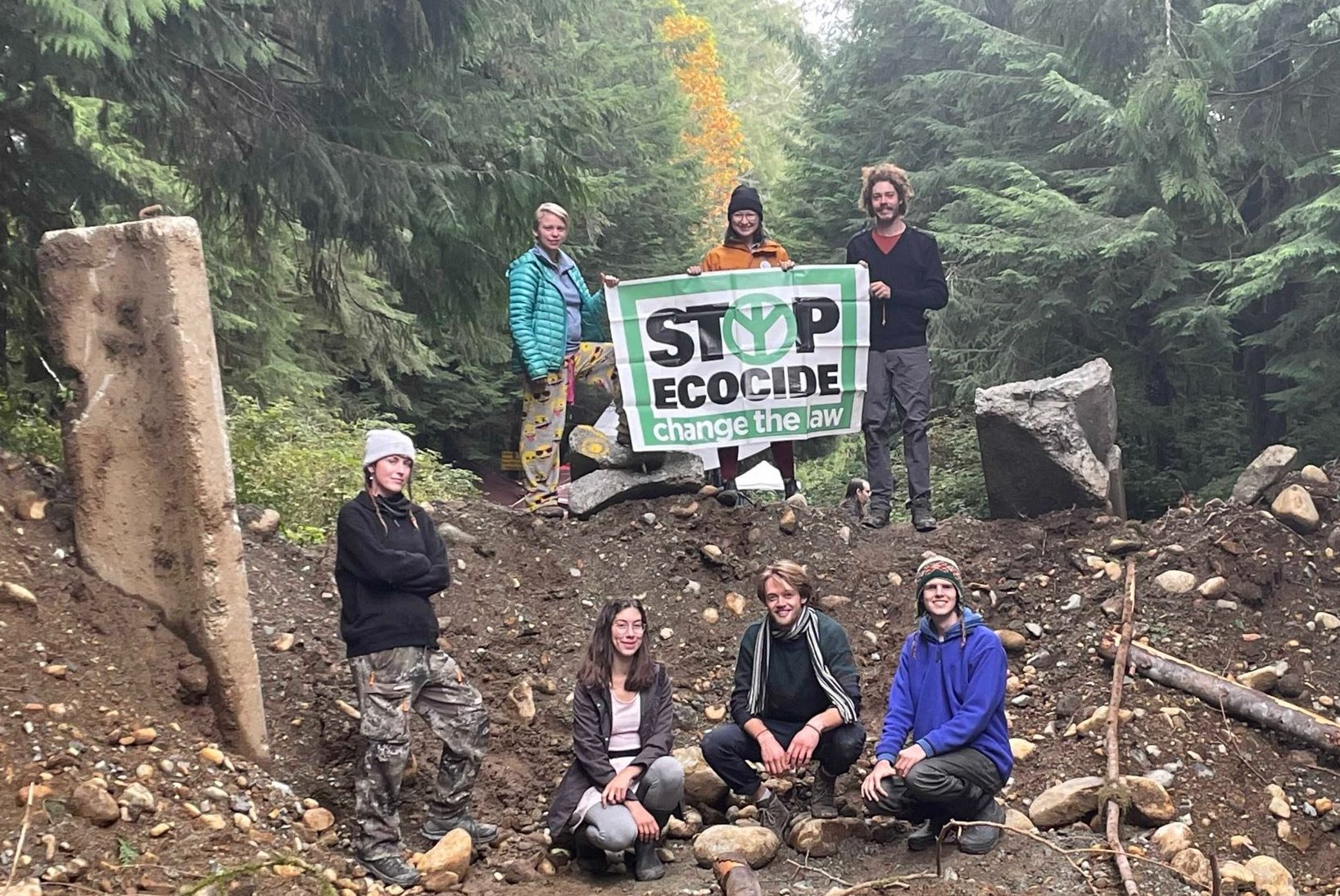 The co-founder of the Canadian chapter of Stop Ecocide, Jamie Hunter (front right), with other protesters at the Fairy Creek blockade this summer. Photo supplied by Jamie Hunter
Previous story
Next story

Jamie Hunter has just returned from defying a court injunction to protect old-growth forest in Fairy Creek and is going to Glasgow next month to push for a major change to international law that would provide another tool against environmental degradation.

The 21-year-old from Nelson, B.C., sees the actions as two fronts of the same battle to confront forces otherwise damaging the planet and imperiling its inhabitants.

“To me, Stop Ecocide is a really tangible solution,” said the co-founder of its Canadian chapter. “Obviously, it’s not the only solution, but it’s a big piece of the puzzle because it really says that causing this damage to the environment is not OK.”

That would mean adding the mass damage and destruction of ecosystems to a shortlist of the most serious and heinous crimes the world seeks to collectively judge — genocide, crimes against humanity, war crimes, and the more recently added crimes of aggression.

As Hunter sees it, creating the crime of ecocide would draw a line in the sand and present leaders such as Brazil’s Jair Bolsonaro with a timeline to get on the right side, and also send a strong signal to corporate executives about their ultimate culpability.

“There would be a point at which the world would see that it seemed inevitable, that this is the direction it is going to go in, and that would be when industry will start to shift,” said Hunter, who leads youth organizing for the group in Canada. “It turns those activities into things they can’t really contemplate.”

It would also require signatories to create national laws that take such a shift into account,

Any such international update would require national laws to follow, and to that end, the NDP’s Leah Gazan put forward a private member’s bill in February 2020. Bill C-232, which sits at first reading, seeks a legal right for “all Canadians to a safe, clean, and healthy environment.”

The young activist Hunter says it might be a five-year process from here at best; the ICC meets annually in December and supporters would want to feel confident they could get two-thirds of its members to agree to the proposal.

International criminal lawyers, Indigenous advisers, researchers, and diplomats around the world are working to make ecocide — the mass damage and destruction of ecosystems — a crime in the eyes of the International Criminal Court. #Ecocide

One of the first countries to talk about presenting it was Vanuatu. “It’s literally in danger of being entirely underwater when the sea levels rise,” Hunter points out, while France, Belgium, and Finland are among other backers.

Hunter, who has been involved with the Fridays For Future youth street protest groups as well as environmental civil disobedience, says he expects large protests against COP26, with groups planning mass marches the day after it ends, in anticipation of disappointment.

The climate change conference — also known as COP, short for Conference of the Parties — has brought the globe together since 1995. The talks gather policy-makers, scientists, environmental activists, climate experts, and news media from the 197 member countries of the United Nations Framework Convention on Climate Change to set and work towards global climate goals. This year, COP26 will take place at the Scottish Event Campus in Glasgow, Scotland, from Oct. 31 to Nov. 12.

“It’s unfortunate that we have that expectation, but given what we’ve seen previously, it’s not surprising,” he said.

While he wants to see “real commitments to action from world leaders,” he also acknowledges that “probably won’t happen.”