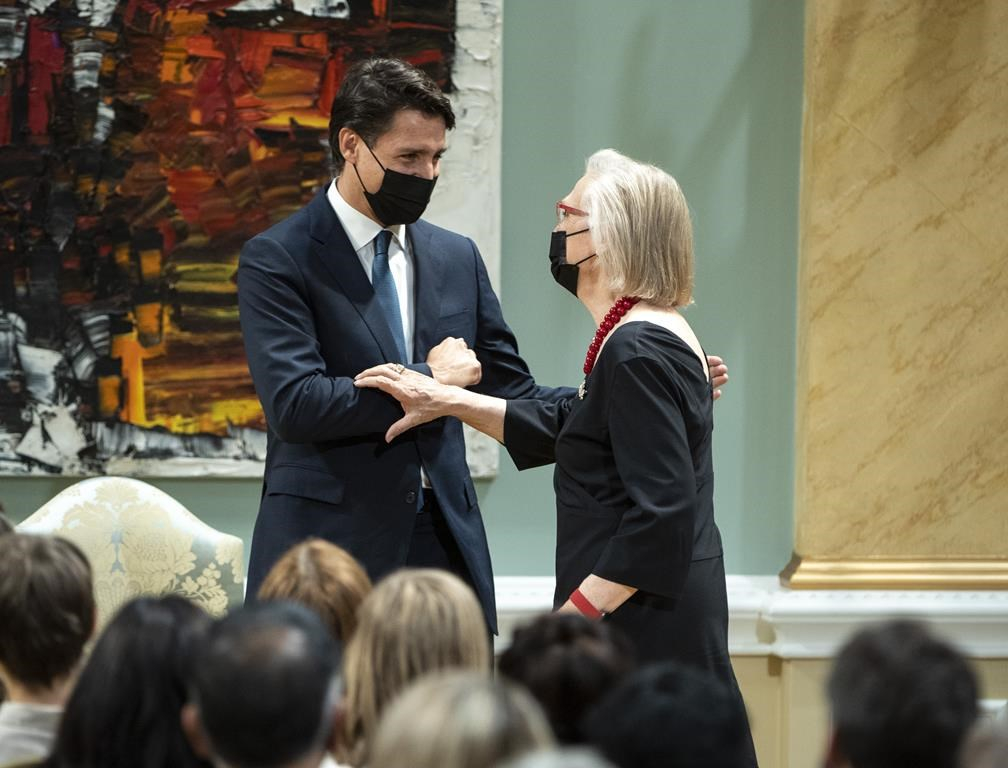 Prime Minister Justin Trudeau receives Minister of Mental Health and Addictions and Associate Minister of Health Carolyn Bennett during a Cabinet swearing in ceremony at Rideau Hall in Ottawa, on Oct. 26, 2021. Photo by The Canadian Press/Justin Tang
Previous story
Next story

Carolyn Bennett, who served recently as minister of Crown-Indigenous relations, has been tapped for the mental health and addictions portfolio.

The role is hived off from the rest of the health portfolio, which will be helmed by former Treasury Board president Jean-Yves Duclos.

"A lot of people, I think, have seen that mental health has become a parallel pandemic and that we actually need to really dive in and make sure there is a mental health strategy across all government departments, but also with the provinces and the territories," Bennett said at a news conference Tuesday.

The Liberal platform promised a new federal transfer of $4.5 billion over five years to provinces and territories to provide accessible, free mental-health services.

Advocates for mental health, including the Canadian Mental Health Association, applauded the added focus in cabinet on improving mental-health care in Canada.

"We have a unique opportunity in this moment in time to address long-standing gaps in our mental health system: from the lack of timely access and culturally sensitive care, to care gaps in remote locations and patchwork programs," Margaret Eaton, CEO of the Canadian Mental Health Association, wrote in a statement.

Rates of depression and anxiety have increased across the board during the pandemic, according to the Mental Health Commission of Canada, and isolation measures weighed heavily on those who were already living with mental illness or problematic substance use prior to COVID-19.

"This appointment is a critical step as we work to improve the mental health and substance-use health of all people in Canada," said Michel Rodrigue, president of the Mental Health Commission of Canada.

Bennett will also be tasked with development of a strategy to end the opioid crisis.

In addition, the promises include eyeing other government policies through a mental health lens.

Trudeau vowed to review access to the disability tax credit, as well as other federal benefits and programs, to ensure mental health challenges are among the qualifications. He also promised to include mental health as a specific element of occupational health and safety under the Canada Labour Code.

NDP Leader Jagmeet Singh said the new position is important "now more than ever" due to the pandemic and its effect on mental well-being.

Conservative MP Todd Doherty tweeted that adding the ministerial position is not a "silver bullet solution."

Prior to her election in 1997, Bennett, who will also serve as associate minister of health, was a family physician and assistant professor in the department of family and community medicine at the University of Toronto.

Meanwhile Duclos, who takes over as health minister from Patty Hajdu, will have to negotiate with provinces and territories that have demanded the federal government accept a greater share of the cost of delivering health care.

Hajdu became the face of the federal government's response in the early days of the COVID-19 pandemic.

As Canada moves into the next phase of pandemic recovery, the federal government will have to work closely with premiers to come to a new agreement on health-care transfers.

Premiers seek a meeting with Trudeau to ask the federal government to immediately boost its share of health-care costs from 22 to 35 per cent — an increase of about $28 billion this year.

Duclos was a professor and director of the department of economics at Laval University prior to his election in 2015.

He is also responsible for the Public Health Agency of Canada and will work closely with chief public health officer Dr. Theresa Tam as Canada navigates the fourth wave of the pandemic.