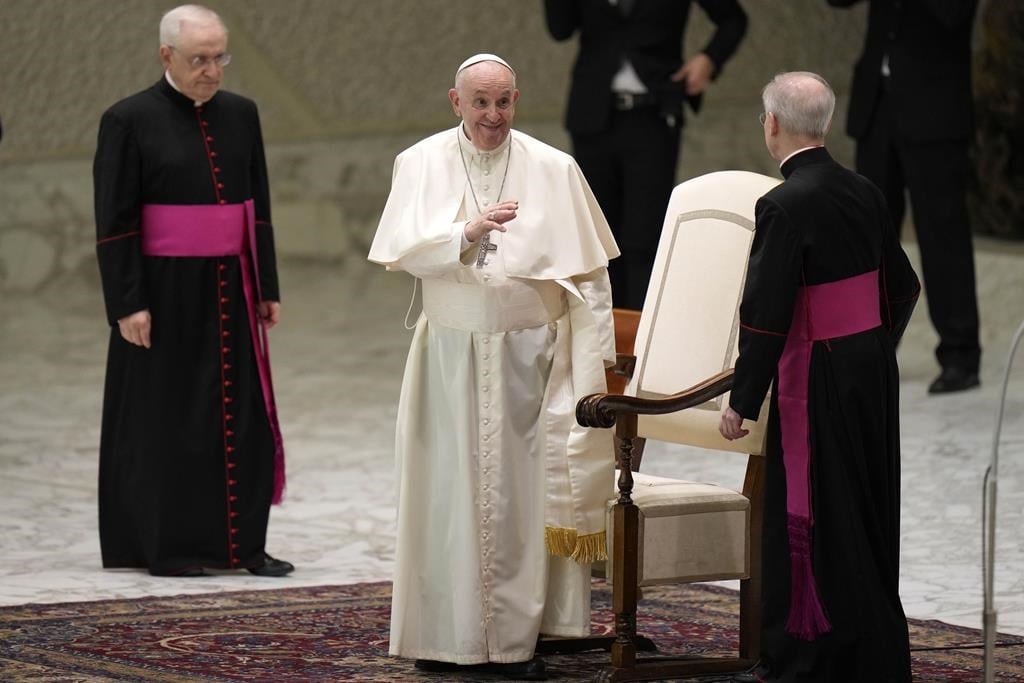 Pope Francis salutes bishops as he arrives for his weekly general audience in the Paul VI Hall, at the Vatican, on Wednesday, Nov. 10, 2021. Photo by The Associated Press/Alessandra Tarantino
Previous story
Next story

The Canadian Conference of Catholic Bishops says 25 to 30 Indigenous people are to meet with Pope Francis at the Vatican in December.

The delegates are to include elders, knowledge keepers, residential school survivors and youth. A small group of Canadian bishops is also to attend from Dec. 17 to Dec. 20.

"The journey towards healing and reconciliation is a long one, but we believe this will be a significant milestone in the Catholic Church's commitment to renewing, strengthening and reconciling relationships with Indigenous Peoples across the land," Raymond Poisson, president of the Canadian bishops, said in a news release Wednesday.

First Nations, Inuit and Métis delegates are to have private meetings with the Pope, during which they will tell personal stories about the legacy of residential schools.

The delegation's theme is how Indigenous Peoples and the Catholic Church can come together toward healing and reconciliation. The Canadian bishops will cover the travel costs and provide mental-health workers for the trip.

"With this delegation, we hope to walk together in a new way, to listen with humility, and to discern the next steps that the Church can take to support residential school survivors, their families, and their communities," Poisson said.

An estimated 150,000 Indigenous children were forced to attend residential schools over a century. More than 60 per cent of the schools were run by the Catholic Church.

Indigenous delegates will also be able to share their expectations for the Pope's visit to Canada, the bishops said.

Last month, the Vatican announced that Pope Francis is willing to make the visit, but Indigenous leaders have said it must come with an apology.

Calls for an apology have intensified since the discovery last spring of hundreds of unmarked graves at former residential school sites.

Previous calls have gone unanswered, including during a previous Indigenous delegation with former pope Benedict in 2009. He expressed his sorrow and "personal anguish" but never apologized.

Prime Minister Justin Trudeau personally asked the Pope in 2017 to consider an apology.

The Truth and Reconciliation Commission's final report urged the Pope to issue an apology "for the Roman Catholic Church's role in the spiritual, cultural, emotional, physical, and sexual abuse of First Nations, Inuit, and Métis children in Catholic-run residential schools."