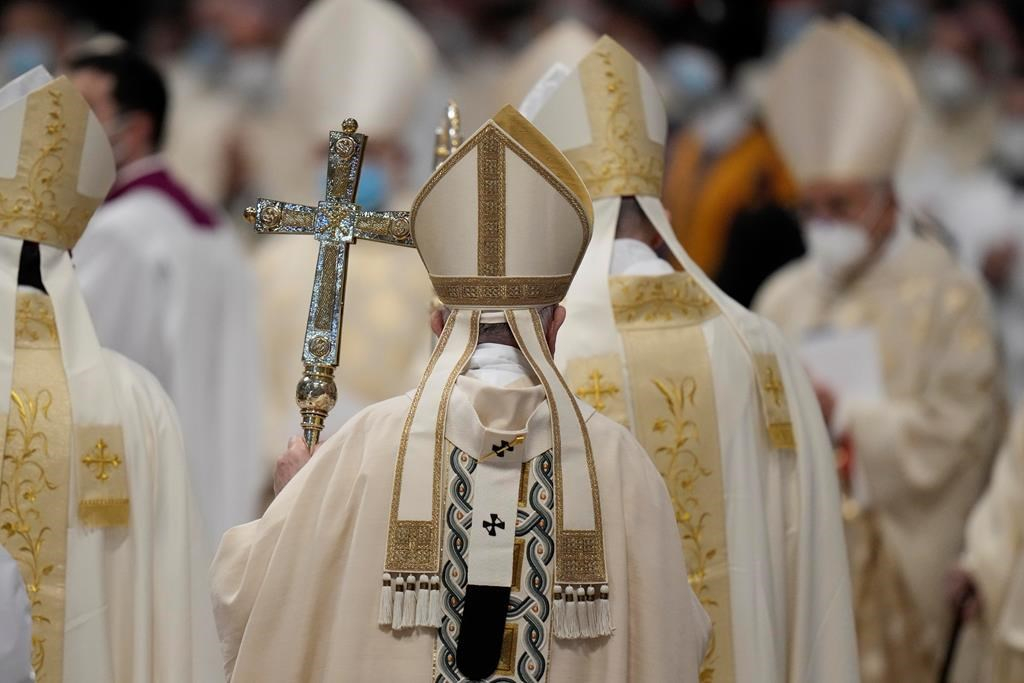 Pope Francis leaves at the end of a mass in which he ordained as bishops Andres Gabriel Ferrada Moreira and Guido Marini, in St. Peter's Basilica at the Vatican, on Sunday, Oct. 17, 2021. File photo by The Associated Press/Alessandra Tarantino
Previous story
Next story

Indigenous leaders say Pope Francis must be ready to deliver an apology for the Catholic Church's role in residential schools if he visits Canada.

"An apology is the beginning," said Cowessess First Nation Chief Cadmus Delorme. "An apology is required, and the rebuilding of a relationship would follow the apology."

The Saskatchewan First Nation made international headlines earlier this year with the discovery of potentially 751 unmarked graves near the former Catholic-run Marieval Indian Residential School.

Delorme said an apology would verify and validate the pain many survivors still live with today.

The Vatican said in a statement Wednesday that the Canadian Conference of Catholic Bishops invited the Pope to travel to Canada in the "context of the long-standing pastoral process of reconciliation with Indigenous peoples."

The statement said the Pope indicated his willingness to do so at an undetermined date.

There was no guarantee of an apology should the Pope visit.

"The Catholic church must be accountable and acknowledge their responsibility for implementing and running these institutions of assimilation and genocide," National Chief RoseAnne Archibald of the Assembly of First Nations said in an emailed statement.

She urged the church to make reparations during any visit, including returning diocese land and investing in long-term healing and support programs.

Natan Obed, president of the Inuit Tapiriit Kanatami, said an apology would be a commitment from the church to deal with human rights abuses and respect Indigenous people.

"Without an apology we don’t have a sense of the moral compass of the institution and of the relationship between the Catholic Church and the First Nations, Inuit and Metis of this country," Obed said.

An estimated 150,000 Indigenous children were forced to attend residential schools over a century. More than 60 per cent of the schools were run by the Catholic Church.

A delegation of First Nations leaders and residential school survivors met with former pope Benedict in 2009. He expressed his sorrow and "personal anguish" but never apologized.

The 2015 final report from the Truth and Reconciliation Commission of Canada chronicled abuses suffered by Indigenous children at federally funded, church-run residential schools. It called for the Pope to deliver an apology in Canada within a year.

Prime Minister Justin Trudeau personally asked the Pope in 2017 to consider an apology.

Pressures have mounted this year following the discovery by First Nations of hundreds of unmarked graves at former residential school sites in British Columbia and Saskatchewan.

Criticism has also intensified as concerns have been raised that the Catholic Church didn't properly compensate residential school survivors as agreed to under a landmark settlement.

Marc Miller, minister of Crown-Indigenous relations, said people would be disappointed if there was not a full and complete apology.

"That full recognition of harms caused is something that's long waited for from the Holy Father himself," Miller said.

Federal NDP Leader Jagmeet Singh said an apology alone is not good enough. He said the Catholic Church is also responsible for compensation and must provide all documents it has related to the schools.

Conservative MP Garnett Genuis posted on social media that he was pleased with the Pope's decision to visit, but he hopes "politicians let the dialogue happen without trying to make themselves the story." Genuis has twice blocked the House of Commons from achieving unanimous consent to request a papal apology. He was the lone dissenter.

First Nations, Metis and Inuit leaders plan to make a trip to the Vatican in December to meet with the Pope in the hope of securing an apology.

The Canadian Conference of Catholic Bishops said in a statement that there have been meaningful discussions with Indigenous people, especially those affected by residential schools.

"We pray that Pope Francis' visit to Canada will be a significant milestone in the journey toward reconciliation and healing," said the group's president, Most Rev. Raymond Poisson.

John Paul II is the only pope to have visited Canada. He did so three times.

— With files from Brittany Hobson in Winnipeg and The Associated Press