Looking forward on climate, the case for hope amid the heartbreak

By Kairn Carrington | Opinion | November 12th 2021
#95 of 99 articles from the Special Report: COP26: Uniting the World to Tackle Climate Change 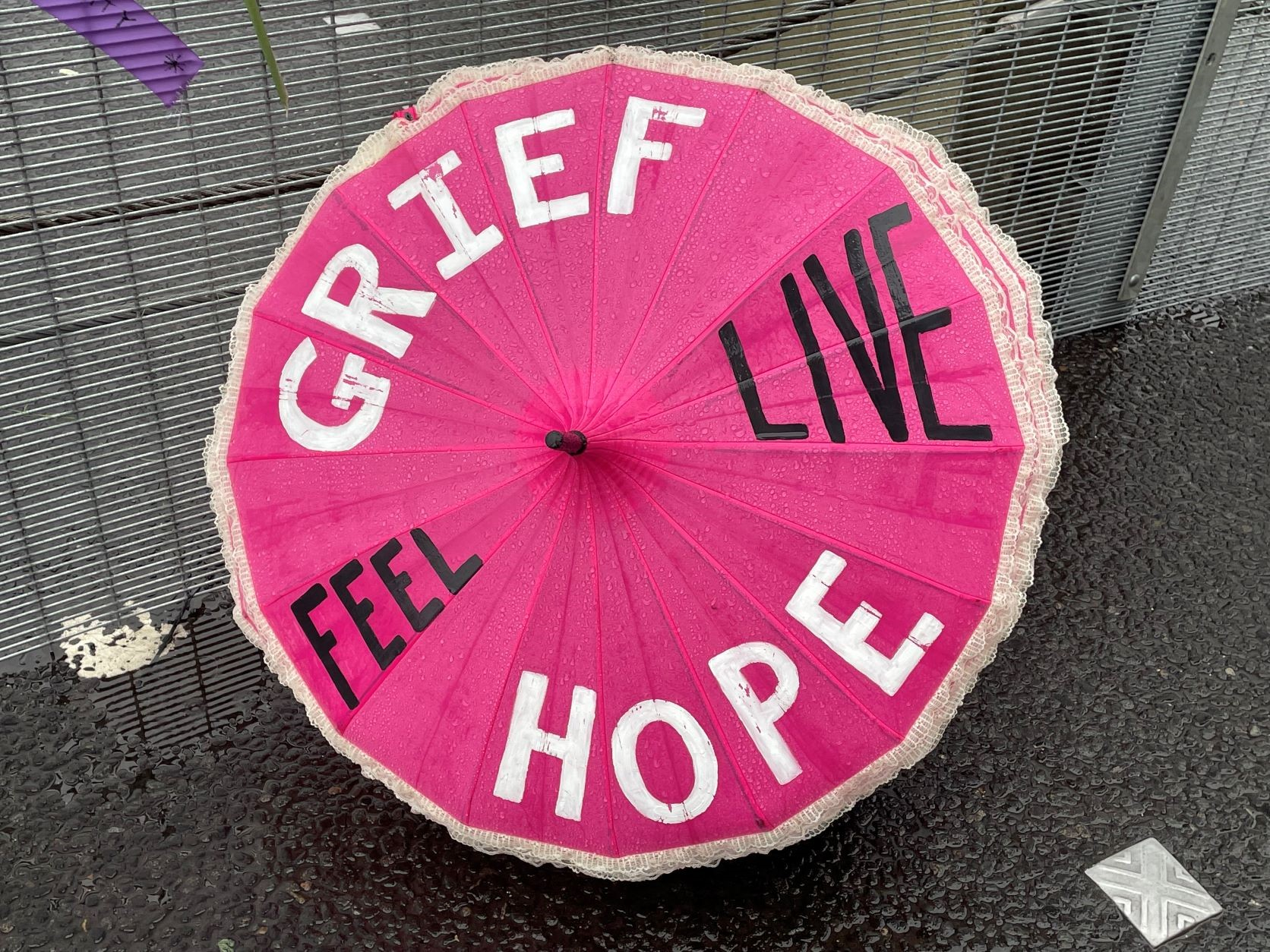 Art installation at the security fence around COP26 at Glasgow on Nov. 12, 2021. Photo by: Kairn Carrington
Previous story

Today I am crying, breathing through waves of nausea. I know this feeling in my body; it is grief.

I keep thinking that we've finally got it — that at long last, we understand the gravity of our situation as we creep closer and closer to the edge of ecological collapse, but then we pull the rug out from under ourselves again. Or maybe it is more accurate to say that the twin powers of politics and oil money have done it for us.

In this moment, I feel scared for the future. I can’t imagine what level of fight-back it is going to take to execute the scale of change we need to avoid losing millions and millions of human lives, lives that could be our children, or our parents, especially if they happen to be born in the Global South or what the UN calls the “vulnerable countries.”

Kumi Naidoo, South Africa’s leading human rights activist, is spitting mad. He is infuriated by the way the industry lobby has undermined efforts to limit growth in oil and gas: “Imagine the absurdity that the largest delegation here is the fossil fuel industry. That is like Alcoholics Anonymous having a global conference and the largest delegation is the alcohol industry.”

Like so many here, Naidoo is frustrated by subsidies world governments provide to the oil and gas sector, totalling $2.5 trillion in the past five years. He challenges us to speak more plainly: “Subsidies are the taxes of ordinary people that are going to investing in their children, and their children’s death.”

Naidoo’s anger over subsidies was echoed by John Kerry in the closing plenary at COP26. “These subsidies for fossil fuels are a definition of insanity. They are feeding the very problem we are to solve.” Surely if there is alignment from the grassroots of Africa to the office of the U.S. president, then things will change. Yet somehow, it doesn’t seem that simple.

While the negotiation of the final text is a critically important part of this climate gathering, it is far from the only thing happening.

In the face of growing frustration with the IPCC process, other players are taking the matter into their own hands, and in this area, there have been many breakthroughs. Two, in particular, stand out. The first is the announcement of a new coalition, the Beyond Oil and Gas Alliance (BOGA), with 12 nation-states committing to phasing out the production of all oil and gas. This is historic because oil and gas have never been addressed by the UN process. As long-time climate leader Harjeet Singh said, “This elephant has not even been in the room.”

The second exciting development is the growing support behind the new call for a fossil fuel non-proliferation treaty. Fridays for the Future youth activist Farzana Faruk Jhumu, a young woman from Bangladesh, called for all youth to support this treaty, calling fossil fuels “our generation’s weapons of mass destruction.”

Within the formal treaty process, the sum of the pledges from all the world’s countries made here in Glasgow would lead us to a world 2.4 C warmer. If these targets are actually achieved, that is. But we must also add in the efforts outside the formal treaty, like the U.S.-EU agreement to cut methane emissions (methane being the most dangerous of all greenhouse gases). The International Energy Association published a new analysis last week predicting that if we factor in all the bi-lateral and civil society agreements, we might be on track for 1.8 C. That would be good news.

Opinion: Climate grief is natural when contemplating a world that will keep getting hotter if we can't end #GHG #emissions. Yet hope springs eternal writes @karenmahon for @natobserver. #ClimateCrisis #COP26 #COP26xCNO

There are many numbers and there will be many more analyses about how much progress we have or have not made. In all that has been said at the UN climate summit, one thing I have heard stands out above all else. We need to remember that all of this is not really about temperatures and parts per million, it is about lives.

Again, Naidoo said it best: “1.5 is what I heard already in 2015 in the Pacific, where children and young people were chanting ‘1.5 to stay alive.’ But 1.5 to stay alive is not even adequate anymore. The new slogan of the people in the most vulnerable countries is ‘1.5 we might survive’ because we are at 1.1 now and already look at the extent of the extreme weather events that we are seeing. Lives are being lost right now! It just happens that most of the lives are those of people of colour.”

Today my heart is breaking, but that's OK. I've learned from 30 years of this work that heartbreak is healthy. I'm reminded of the seminar I went to yesterday on eco-anxiety with climate psychologist Carolyn Hickman, who reminded us climate emotions are cyclical. We fall down, we get back up again, and each time we are stronger for it. This is how we build resilience to take the next steps in what is going to be a very long journey ahead.

When asked what happens next, Naidoo gave the crowd of activists and journalists very clear inspiration: “Don't give up hope. Those that are pushing for a weak outcome, they want you to feel hopeless, they want you to feel that our efforts do not count. And the message we must take from this is that this is a moment of intensification of resistance … Let's just brush ourselves off, get our courage back, and do everything possible … because the window of opportunity is tiny, and it's fast closing.

Hear, hear! No matter what governments finally agree to in the latest update of the Paris climate agreement, this struggle is just getting started. Today is a day to grieve, take a breath, and then tomorrow we will find our hope once more.