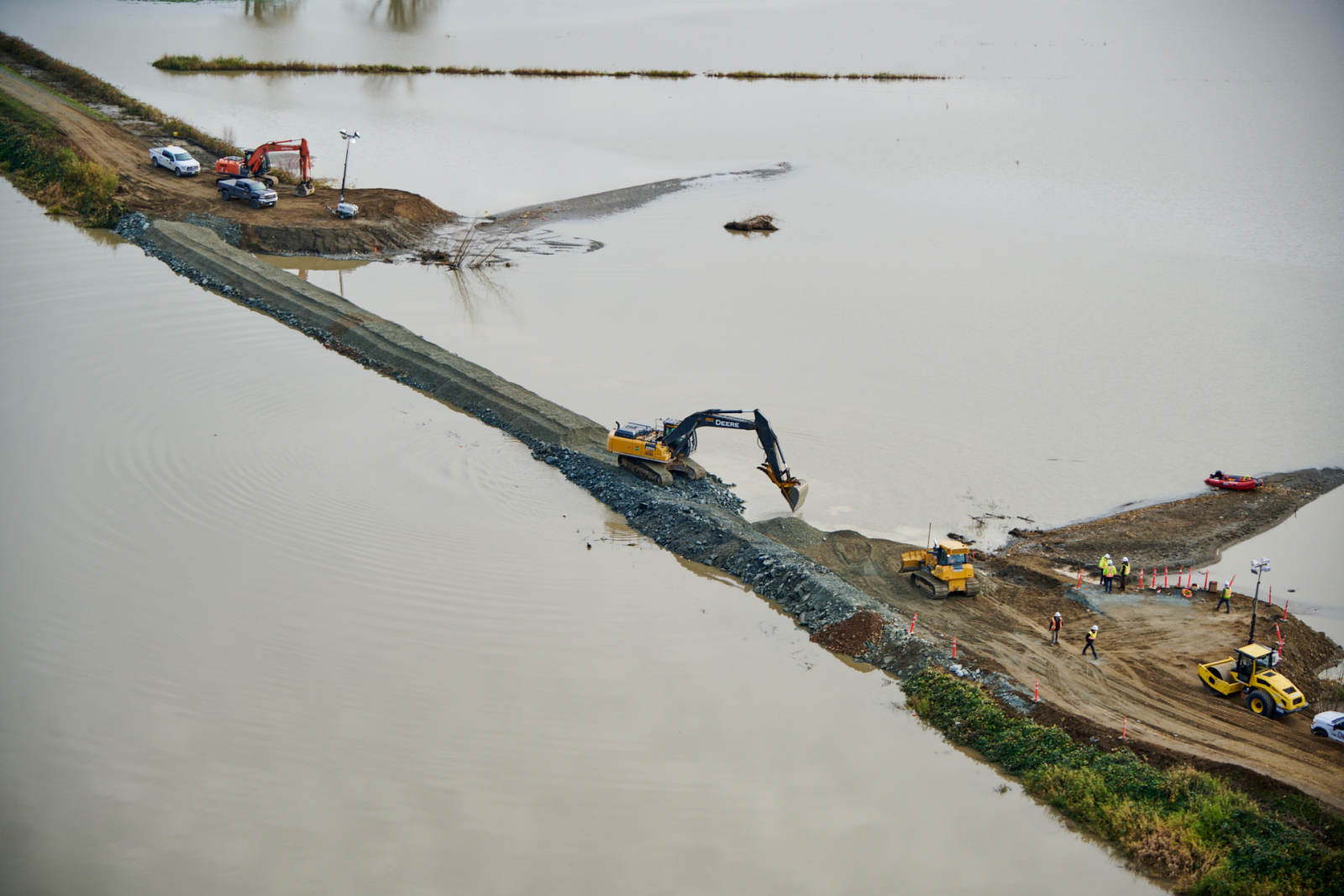 Federal opposition parties are calling for an emergency debate to tackle the flooding in British Columbia as another atmospheric river is expected to batter the province in the coming days. Photo via City of Abbotsford / Facebook
Previous story

On the first day of Parliament’s new sitting, some of Canada’s federal opposition parties are calling for an emergency debate to tackle the flooding in British Columbia as another atmospheric river is expected to batter the province in the coming days.

A letter dated Nov. 21 addressed to Prime Minister Justin Trudeau and signed by Conservative Party Leader Erin O’Toole and the party’s B.C. caucus calls for a “collaborative Team Canada” approach to assess damages and provide rebuilding support. During a Monday morning press conference, NDP Leader Jagmeet Singh said the party would “bring forward” a call for an emergency debate about the disaster.

Singh said the NDP’s focus will be on the broader question of tackling the climate crisis, including “concrete steps to reduce our emissions,” as well as the “immediate need” to invest in improving infrastructure.

“Given this type of extreme weather is more common, we need to see investments from the federal government,” Singh said. “Real proactive investments to make communities more resilient, (and) to prepare for what is becoming more common.”

The Conservative Party letter does not call for explicit steps to address the flooding crisis specifically, or climate crisis generally. Rather, it’s a call to be included in the decision-making.

“Parliamentary collaboration is critical to help the province rebuild, and British Columbians deserve to see that we stand resolutely with them during this difficult time,” said Conservative environment critic Dan Albas in a statement.

“The heroic work of first responders, civic workers, and citizens has helped save lives and protect property, but the rebuilding effort will require significant federal support and a long-term commitment,” he added.

The federal ministry for transportation told Canada’s National Observer it was working with provincial partners to restore the flow of goods across the country. Part of that effort is a supply chain working group launched Saturday that includes federal and provincial departments, the Vancouver Fraser Port Authority, the Vancouver International Airport Authority, BC Trucking Association, CN Rail, CP Rail, and others.

“​​The quality of our transportation infrastructure and the efficiency of our trade corridors directly benefit the lives of Canadians. It is important to work together to determine how best to ensure Canada’s gateways stay strong, resilient and safe,” said Transport Minister Omar Alghabra in a statement.

The damage was caused by an atmospheric river that dumped a month’s worth of rain on B.C. early last week. The record-breaking rainfall, mixed with melting snow, and forests damaged from wildfires, represented cascading climate crises that destroyed communities and claimed at least four lives. The weekend saw a weaker atmospheric river pour 40 to 50 millimetres in some areas of the province, and on Monday, Environment and Climate Change Canada (ECCC) warned another atmospheric river was expected to hit by week’s end and deliver another 40 mm to 70 mm of rain, and potentially over 100 mm in some areas.

Lives have been lost, infrastructure destroyed, supply chains are snapping, and another atmospheric river is to hit B.C. by week's end. Opposition parties are calling for an emergency debate as Parliament kicks off a new session. #cdnpoli

“It is fairly extraordinary to see this many ... and now we're on a streak,” said ECCC meteorologist Armel Castellan during a press conference.

"At this point, we are bracing for what will end up being ... a record-breaking fall in terms of overall precipitation numbers for many communities along the central and south coast,” he said, calling it a “parade of storms.”

Castellan said while no specific event is directly attributed to climate change, more powerful and longer-lasting atmospheric rivers are “super consistent” with climate change forecasts, meaning the imperative to prepare is only growing.

ECCC is working on an atmospheric river categorization system similar to hurricane warnings to give people a sense of how devastating the weather could get, but that system won’t be ready for the impending storm. It is not known what categorization last week’s storm would get, but with 200 mm pummelling some parts of the province, it’s expected to rank on the high end as a Category 4 or 5.

A clearer warning system is one way to brace for extreme weather, but as key pieces of infrastructure were washed away in landslides, there’s a growing emphasis to build climate resiliency into supply chains. There’s the immediate shock to food and fuel supplies in a crisis, but prolonged damage to road and rail infrastructure has economic implications too.

“It might be easier to build some strength into some parts of those supply chains, and maybe more difficult in others, but I think it's clear we have to put some effort into looking to the future and seeing where we are in these international and intra-national supply chains so that we don't get caught up like this,” he said.

There are different schools of thought on how to build resilience in supply chains. One way is to build redundancy into the system, like having multiple highways to facilitate trucking if one stretch is shut down. Another is to take pressure off the economic system that runs into bottlenecks when disaster strikes by turning away from globalized, long supply chains toward local production and consumption.

“We need to restore those services because our economy is not built to work without those things, and the people who suffer immediately are the most vulnerable,” he said.

“But longer term, I think we have to take this to heart … the things that are the most vulnerable to disruption from climate change are actually the aspects of the economy we need to make ourselves less dependent on as quickly as possible.”

#BCStorm update: We have completed an aerial assessment of our infrastructure along the #BCHwy8 corridor between #SpencesBridge and #Merritt, and we’ve found substantial damage – including at least 75 power poles that have washed away. pic.twitter.com/qapRM7edhX

Using the example of electricity generation, Nagata said local power generation offers more options when big power lines are knocked out from fires, ice storms, or flooding. In other words, rather than moving electricity from one province or state to another in search of the most economically efficient option that could be at risk during extreme weather, it is possible to build more resilient power grids by focusing on local power generation. It’s a concept that can be applied across the board — from energy to food production — to build resilient communities.

Supply chains are the connective tissue between economies. When stretched thin, these fragile trade networks, increasingly based on just-in-time delivery to avoid extended warehousing costs, can easily snap.

“It really points to the vulnerability we have when a one-day rain event can basically disrupt these supply chains for the whole country,” Cannings said.

The problem Nagata describes is how disruptions to one part of the economic system can ripple out and impact others when supply chains are stressed. In an era of climate breakdown where regions around the world will be increasingly impacted, he’s questioning the wisdom of relying on such a system. For Nagata, the solution requires seismic shifts in how the economy functions.

“Here we come to the dilemma of the early adopter problem and the balance between individual consumer choices and large state-driven shifts in our economy,” he said.

Nagata said that as it stands, “the whole economy is working against you” when trying to make individual choices that would help build resiliency. As one example, locally sourced foods can often cost more than what’s available at the grocery store, he said.

“Are you going to punish your family by buying more expensive versions of the same thing that come with a shorter supply chain?” he said.

Similarly, government rebates for home energy efficiency programs and electric vehicles favour individuals and families with the disposable income to spend, he added. By focusing on upper-middle-class concerns, governments are not responding to the needs of the most vulnerable to climate breakdown, including migrant workers, people with disabilities, and Indigenous communities, Nagata said.

He said the federal government has a role to play during the climate emergency by setting price and market signals that would shift economies toward more resilient supply chains.

Moreover, with RCMP deployed to aid TC Energy’s Coastal GasLink pipeline construction through Wetʼsuwetʼen land during the flooding crisis, Nagata says genuine conversations about building climate resilience into our systems can’t be had.

“The military has been flown in to fill sandbags, but the provincial police are off playing cowboy on Wetʼsuwetʼen territory, and so until we get to the point where we're no longer subsidizing the expansion of these pipelines and this fossil fuel infrastructure, I think it's going to be hard for B.C. to have a serious conversation about building a more resilient economy,” he said.

Chefs and grocers adapt in B.C.’s ‘year of emergencies’

John, thank you for your

John, thank you for your article. You say "The record-breaking rainfall, mixed with melting snow, and forests damaged from wildfires" was to blame for the flooding, but unsustainable logging practices are also to blame. Let's not leave that one out. https://sierraclub.bc.ca/intact-forests-safe-communities-sierra-club-bc-...

Governments in the past

Governments in the past seemed to only consider Ontario and Quebec. I wonder if they think of BC at all. When the flooding was on the news CBC cut away to cover something else altogether. Even the media joins in. When they talk about the west they certainly are not thinking about BC. I am really fed up with BC being ignored but maybe this flooding will cause them to put both BC and climate change on the agenda. However if this flooding had happened in Ontario or Quebec I am sure the federal response would be much more vigorous. Is Trudeau planning to help people who have lost everything and since many lived in a flood plain (unknown to them that their land is a lakebed) so insurers will not help. Federal government pay attention for once! BC needs help.