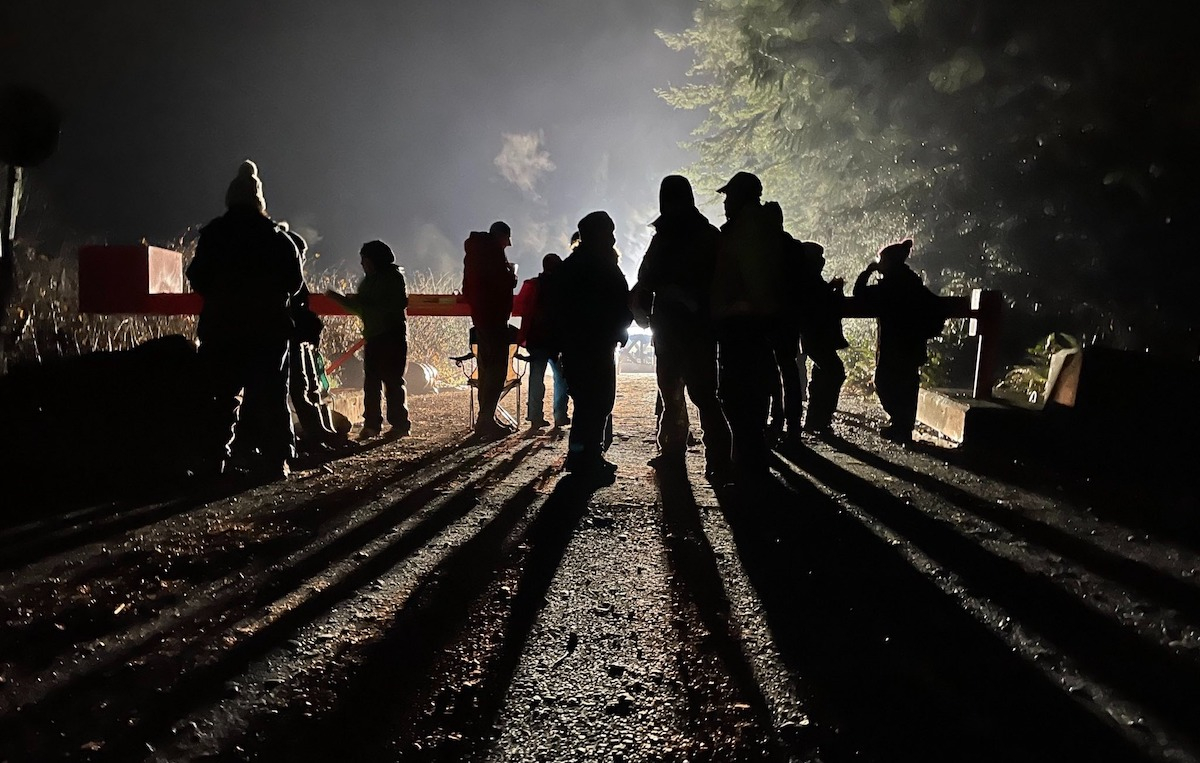 A contingent of 30 seniors braved the dark and arrests to protest old-growth logging in the Fairy Creek region Thursday morning. Photo by Render, courtesy of RFS
Previous story
Next story

A caravan of seniors wound its way along pitch-black logging roads early Thursday to be in place before first light to block old-growth logging in the Fairy Creek region on southwest Vancouver Island.

A contingent of 30 from across the island and adjacent Gulf Islands arrived at Granite Main Road at 6 a.m. to try to stall the road-building and clear-cutting of the forest giants by Teal-Jones in tree farm licence (TFL) 46 near Port Renfrew.

Ten seniors and two younger activists stretched out on the gravel road and their arrest by RCMP began just before sunrise. The protest and the arrests were peaceful, said organizer Jay Van Oostdam.

Shortly after the 12 individuals were carried off the road, logging industry vehicles continued into the cutblocks, according to RCMP.

“Every delay means one more tree is still here,” the 69-year-old said.

The scene that played out this week is in marked contrast to the large-scale, chaotic and tense scenarios just months ago that saw mass arrests, pepper-spraying, property seizures and complicated and risky contraptions used by activists to frustrate logging in old-growth stands wedged between Fairy Creek and the Walbran Valley farther north.

Since enforcement began in May, the RCMP has arrested 1,188 people, some multiple times, who support the 15-month-long blockade organized by activist group the Rainforest Flying Squad (RFS).

"With the torrential rains and cold and the oncoming snow, I have to really admire the people who are willing to hold those positions," says Kathleen Code of the #RainforestFlyingSquad activists spending winter at #FairyCreek to protect #OldGrowth.

The RCMP launched a massive offensive that began Aug. 9, arresting hundreds of protesters in a series of conflicts over the course of the month, which ultimately saw the blockade’s main camp razed not far from where the elders protested this week and eliminated any permanent strongholds along the roads in TFL 46.

However, RSF secured a short-lived victory Sept. 28 when B.C. Supreme Court Justice Douglas Thompson refused to extend the Teal-Jones injunction in a decision that included a withering indictment of RCMP tactics during its enforcement.

But following an appeal by the forestry company, the B.C. Court of Appeal offered Teal-Jones a temporary injunction on Oct. 8, which has been extended until a final decision is issued.

“We're not terribly hopeful, so we are contemplating having to go to the Supreme Court of Canada,” she said, adding RSF is exploring other legal options.

There also isn’t much comfort to be derived from the B.C. government’s pending logging deferrals that seem to cover some areas in the Caycuse Valley, Code said, noting the area’s giant trees RFS tried to save have now been cut down.

“It’s beyond sad,” she said. “These precious places of biodiversity will never be seen again.

“Once they are clear-cut, they're gone forever, and it just breaks my heart every time.”

As winter descends, the number of people in the two remaining camps — one inside the injunction zone called Roadside Camp and one outside it called RnR camp — has dwindled. Code said the activists intend to remain despite the increasingly difficult conditions.

“I imagine there’s a dozen or so determined to hold up a permanent presence,” she said.

“Of course, with the torrential rains and cold and the oncoming snow, I have to really admire the people who are willing to hold those positions.”

The recent elders for old-growth action, one of several that have taken place over the summer, was also a show of solidarity for folks preparing to spend a second winter in the camps, Van Oostdam said, adding he and other seniors also want ancient forests to remain so his children and grandchildren can thrive.

“We just have to show them how much we're impressed with their fortitude and their ability to just stay up there and live in those rough conditions,” he said.

“We have to show them that we care and we recognize what they are doing for us.”

The Premier of BC and the

The Premier of BC and the Prime Minister met to check out the disaster caused by the flooding in that Province. They admit to some extent that it is due to climate change. Than why are they not smart enough to realize that these old growth forests and Indigenous people are what is necessary to fix the climate problem. This is such hypocrisy and sickening politics to be arresting Indigenous people that are trying to protect old growth.

That's interesting, given that the flood control people point to the logged off areas, and the thick layer of ash following burning either from forest fires or from burning off what's left on clearcuts.
And it's appalling that our "leaders" invoke "climate change" when it's convenient, and don't pay any attention at all to how the pieces fit together -- let alone what their own people are saying.

This truly is what makes you

This truly is what makes you lost all hope for humanity. It's like a plot for a movie where people get together to stop the bad guys that are stupidly destroying the splendid natural world that is embodied in these magnificent trees. At least in a movie the good guys would be able to express at least a FRACTION of the white-hot rage actually felt....