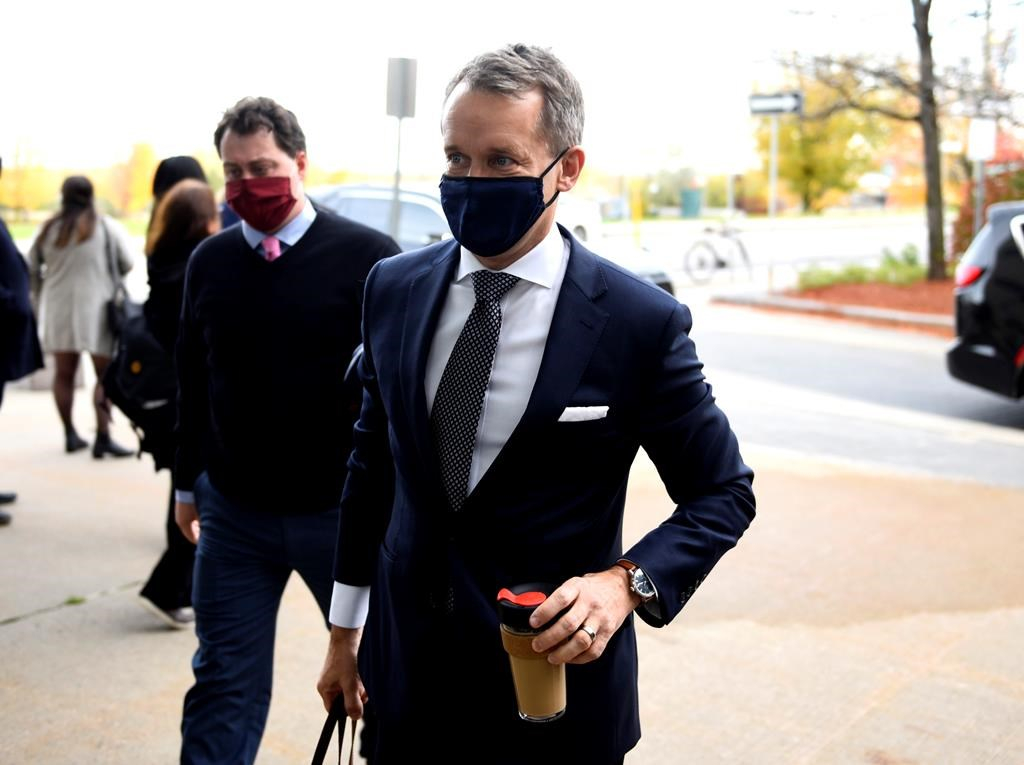 Minister of Labour Seamus O'Regan arrives for a cabinet meeting in Ottawa, a day after federal ministers were sworn in, in Ottawa on Wednesday, Oct. 27, 2021. File photo by The Canadian Press/Justin Tang
Previous story
Next story

O'Regan acknowledges that at least two provisions in Bill C-3 could undermine the objective, which is to ensure ill workers don't have to choose between going to work sick or staying home without pay.

The bill would allow employers to require a doctor's note verifying that an employee is ill.

Senators on a committee doing a pre-study of the bill say that makes no sense on a number of fronts — including the fact that a person with COVID-19 symptoms is not even allowed to enter a doctor's office these days — and would inhibit workers from taking sick leave.

As the bill is currently written, workers would accrue their 10 days of paid sick leave at a rate of one day per month.

Senators point out that would do little to help a worker who contracts COVID-19 or another illness within a month or two of the bill's enactment.

O'Regan told the Senate's social affairs committee Monday that the government is open to amendments on both those issues.

Sen. Patricia Bovey, a member of the Progressive Senate Group, asked why the bill doesn't start from the premise that every worker is entitled to 10 days of paid sick leave each year, starting immediately.

O'Regan said that's an issue where the government "would be open to suggestion and what I would say is, 'Give it to me in writing so that we can take a look at it.'"

"Oh, it will come in writing," Bovey assured him.

Sen. Frances Lankin, a member of the Independent Senators Group, told O'Regan she's in the process of drafting an amendment on that issue while her ISG colleague, Sen. Stan Kutcher, is drafting another to do away with the doctor's note provision.

She and other senators pointed out a number of problems with requiring a doctor's note: patients, particularly in rural areas, may not have easy access to a doctor and vulnerable people such as single parents or those with disabilities could have more difficulty getting to a doctor's office.

Moreover, they argued that someone who has the sniffles or other mild symptoms that might be COVID-19 could decide to go to work rather than go to the trouble and expense of getting a doctor's note.

Sen. Rosemary Moodie, a physician and member of the Independent Senators Group, pointed out that a person with COVID-19 symptoms can't enter most medical facilities these days.

"So the actual ability to obtain a certificate is severely limited," she said.

O'Regan noted that the bill allows an employer to demand a doctor's note within 15 days after an employee returns to work, which would give a person time to see a doctor once the symptoms are gone.

But Kutcher said that makes even less sense. It puts doctors in the position of verifying that someone they hadn't seen or treated was legitimately sick some days or even weeks earlier.

O'Regan said the purpose of the provision was to have a "trip wire in case there was any concern of abuse."

Nevertheless, he said the government is open to finding "some sort of accommodation" on the issue. He acknowledged a recent poll suggesting more than 80 per cent of Canadians would rather go to work sick than go to the trouble of getting a medical certificate.

Bill C-3 is one of three priority bills the minority Liberal government wants to have passed by both parliamentary chambers by the end of this week, when Parliament rises for a six-week break. It is a two-pronged bill that would also impose stiffer criminal penalties for harassing or intimidating health-care workers.

The bill received unanimous approval in principle last week in the House of Commons and is now being scrutinized by a Commons committee. Two Senate committees are conducting pre-studies of the bill to speed up its eventual passage once it reaches the upper house.

Conservative Sen. Yonah Martin questioned how the government intends to push the bill through by Friday if it is contemplating amendments.

"I feel like we need so much more time on this important bill," she said, adding she fears there will be "unintended consequences" by not considering it carefully.

O'Regan argued that the threat of the new Omicron variant of COVID-19, which is sweeping the globe, adds urgency to passing the bill to ensure federally regulated workers are able to take paid time off work if they contract the virus.