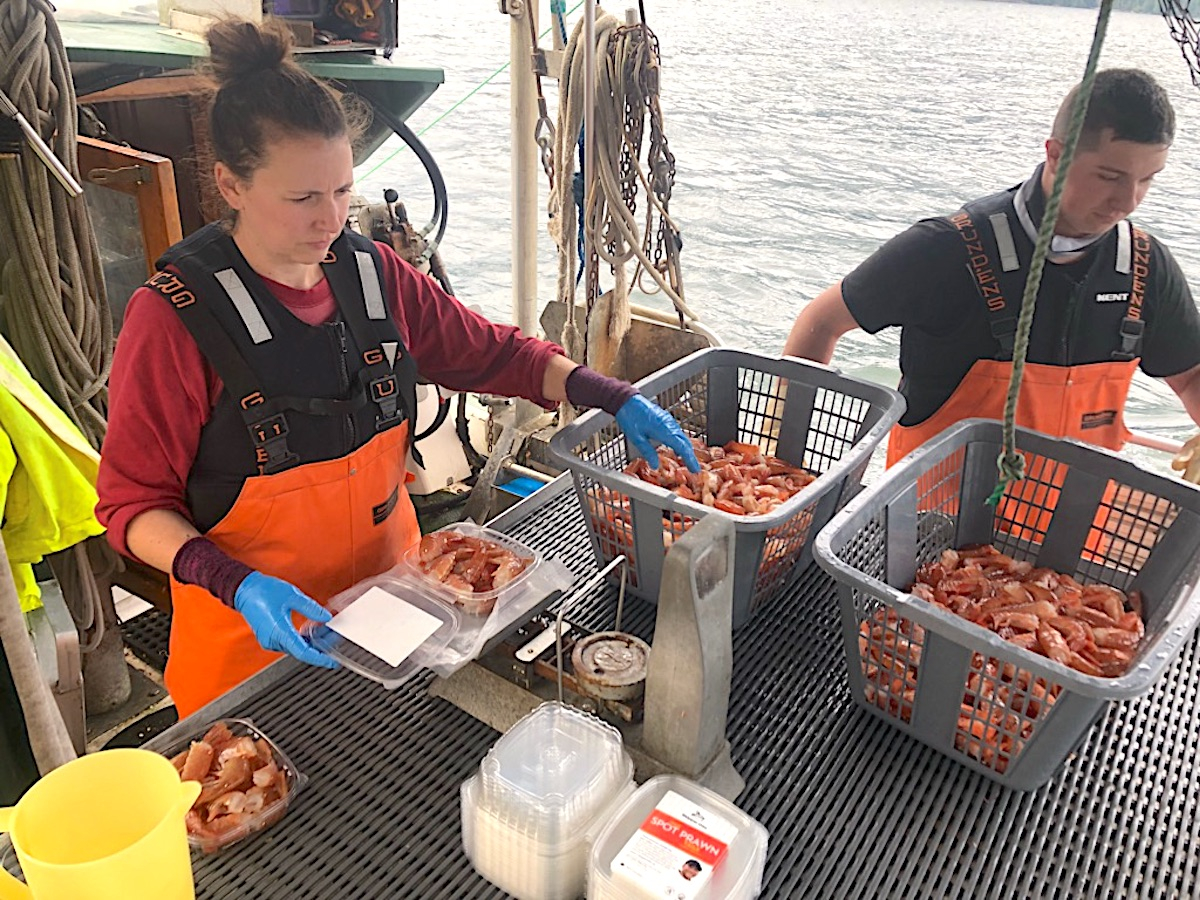 A swell of outrage is rising again as the Department of Fisheries and Oceans revisits regulation changes that independent harvesters say will sink B.C.’s local spot prawn industry.

Last spring, DFO put its previously proposed regulations concerning the freezing and packaging of prawns in saltwater while at sea — called “tubbing” — on hold due to backlash by a number of critics and small-scale fishers just prior to the opening of the season.

But half a year later, and without any meaningful consultation with stakeholders, DFO is imposing new regulations that propose to cut the size of the tubs used for freezing prawn tails by two-thirds — calling for an eight-ounce tub in place of the typical 24-ounce container, Strobel said.

The smaller tubs, which hold about six tails, will drastically drive up the use of plastic containers, as well as the costs of packaging and labour and will translate into unacceptable price increases for local customers, she said. And the smaller containers will make the prawn tails more vulnerable to freezer burn.

DFO has informed harvesters the measure is necessary to make the product readily available and the prawn tails visible for inspectors ensuring size requirements.

For decades, fisheries officers have simply defrosted the larger tubs for inspection, a process that takes a couple of minutes, and is necessary anyway to accurately measure the prawn tails, Strobel said.

“And how is an eight-ounce tub more readily available for inspection than a one-pound tub?” she asked.

“Is it really that onerous? Are there (fisheries officers) really complaining, saying they simply don’t have two and half minutes for inspection?

#DFO is revisiting regulations that independent prawn harvesters say will give advantages to big companies exporting products overseas at their expense, create more plastic garbage, and increase the prices of the local seafood. #BC #SpotPrawns

Any infractions in the industry recorded by DFO are very limited, so it doesn’t appear to be an enforcement issue, said Strobel, adding it's a mystery why the change is being made.

“It’s like they’re hitting a fly with a sledgehammer,” she said.

MP Gord Johns, NDP deputy critic of fisheries, said the new changes are baffling and seemingly without any logical basis.

“It’s actually going to make it harder on everybody in the sector and there’s just no rationale for it.

“They’re creating a problem when they didn’t have one.”

If the proposed change goes forward, local harvesters may have to sell their catch live at significantly lower prices to big seafood processors serving the export market, Strobel added.

And local customers and foodies who relish B.C. prawns during the short spring season, and at events such as Vancouver’s Spot Prawn Festival, will face higher prices and less availability.

But it will impact local food security, fishing families and coastal communities that depend on the $45-million commercial prawn industry, she added.

It’s not clear who DFO consulted to formulate the new regulations, but it didn’t rely on input from family-based businesses like hers, or fishing associations representing independent or First Nations harvesters, Strobel said.

And public input on the proposed regulations is taking place during December when most people are caught up in the holiday season.

“Government has consulted with a few large corporations and … obviously, that no longer passes muster for what is considered as an acceptable way of consulting with stakeholders.”

This symptom of bassackwards

This symptom of bassackwards decision-making screams for intervention and sober consideration. The ability of narrow focused and normally sensible committees/decision makers to fecklessly impact peoples' lives is all too common.
How do we improve this world if we continue to come up with wrong minded actions like this DFO decision?

In the 1980's one could, before entering an overnight anchorage, drop a prawn trap in 200 feet of water practically anywhere along the coast and find it loaded with prawns on your way out in the morning. Since that time it is now possible to travel much of the coast and see the long prawn trap lines (red floats) everywhere, tons of them. There are large numbers of "prawn boats" all over the coast seeking the prawns which are now fished for at ... oh say 400-500 feet or even deeper as there are very few above those depths. Soon the prawns will be gone as well as the herring and the salmon.