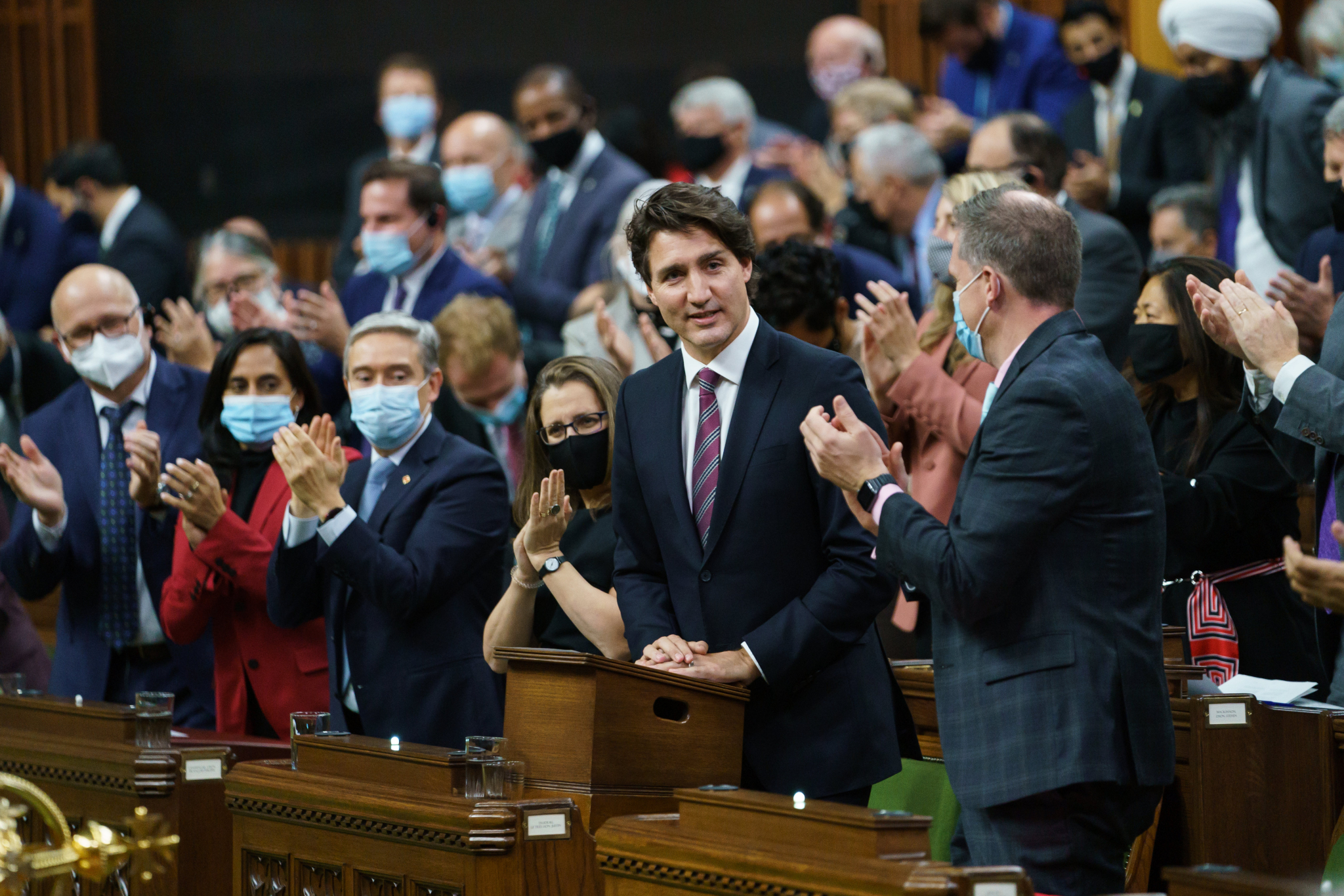 Prime Minister Justin Trudeau in the House of Commons on Nov. 22 for the election of Anthony Rota as Speaker of the House. Photo by Adam Scotti / PMO
Previous story
Next story

The cabinet ministers’ mandate letters published last week hint at a whole-of-government approach to tackling the climate crisis, but the devil will be in the details, many environmentalists say.

“We're seeing the support, at least on paper, of a whole-of-government approach to climate change, and that's really important because historically climate was only addressed by ECCC (Environment and Climate Change Canada),” said domestic policy manager with Climate Action Network Canada Caroline Brouillette.

“We know that climate change affects every single sector of our economy and of our societies, and so a whole-of-government approach is absolutely necessary.”

These objectives are spread across departments like Public Safety, International Development, Natural Resources, Environment and Climate Change Canada, Finance and others.

Climate change is, for example, reflected heavily in Finance Minister Chrystia Freeland’s mandate letter, which requires her to ensure all budgetary measures are in line with Ottawa’s net-zero by 2050 goal, work on just transition legislation with other departments, eliminate fossil fuel subsidies in tandem with Natural Resources Canada (NRCan) and launch a $5-billion green bond program, among other things.

It remains to be seen whether these compulsory disclosures and net-zero plans are “going to be a really strong regulatory approach or not, but that could have a bigger impact than most other government measures,” said Environmental Defence national program manager Dale Marshall.

“We know that climate change affects every single sector of our economy and of our societies, and so a whole-of-government approach is absolutely necessary," says @carobrouillette. #cdnpoli

“If this is a robust regulation, it could have a huge impact on money flows — private and public — in the future and either lead to greater climate action or lead to more fossil fuels,” he added.

Adam Scott, director for Shift Action for Pension Wealth and Planet Health, told Canada’s National Observer the implication of the finance minister’s new mandate letter is that a number of Crown corporations will have to have their mandates changed to align with net-zero goals.

EDC keeps much of its financing under wraps for stated corporate competitiveness reasons, but its international financing for fossil fuels is estimated at somewhere between $2 billion and $9 billion from 2018 to 2020. EDC also has a separate commitment to end international fossil fuel financing, which would bring it closer to being in-line with Ottawa’s climate goals.

Canada also provides more financing to the fossil fuel sector than any other G20 country, funnelling that money mostly through EDC. For example, in 2018-19, Enbridge received more than $300 million from EDC for business in the United States, while Calgary-based Parex Resources was given at least $94.5 million in loans for oil and gas extraction in Colombia that same fiscal year.

As Crown corporations, it is expected they would all have to develop plans to align with a net-zero future, making the finance department a key player in Canada’s coming climate policy.

“It's great to make a promise that budgets need to align with climate goals, but when we don't actually have clarity on what those goals are — for example, winding down fossil fuels versus ramping them up while investing in unproven carbon capture — it's hard to put much stock in that promise,” said Amara Possian, Canada campaigns director with climate advocacy group 350.org.

Scott said another important area to watch will be the Office of the Superintendent of Financial Institutions (OSFI), the federal financial regulator. OSFI regulates banks, pension funds, insurance companies and other financial institutions. While net-zero plans will need to be developed, how quickly emissions will be reduced is an open question, which could render the Paris Agreement goal of holding warming to 1.5 C impossible if steep emissions reductions are not soon met.

Of the mandate letters for other government departments, NRCan has also seen a significant change in its priorities since 2019.

“NRCan's role went from being seen as a promoter of the extraction of natural resources in a status quo kind of context towards positioning the ministry as a proactive actor of the energy transition,” said Brouillette. “Historically, ECCC and NRCan would work in silos rather than in a complementary and coherent fashion, (but now) we're seeing a lot of files being shared by ministers (Steven) Guilbeault and (Jonathan) Wilkinson.”

In fact, the first bullet point of then-Natural Resources Minister Seamus O’Regan’s 2019 mandate letter was to “construct and complete the twinning of the Trans Mountain Pipeline,” with other references in the letter to ensure the energy sector remains competitive. By contrast, Natural Resources Minister Wilkinson’s 2021 mandate letter does not mention Trans Mountain (TMX) once, and the only reference to the oil and gas sector is to cap emissions.

Possian said TMX will be a litmus test for the federal government’s commitment to responding meaningfully to climate change given that every credible energy forecast, whether international or domestic, shows demand for oil falling in every scenario.

“One would think a budget aligned with our climate goals would cut off public funding for that project. But as of yet, Trudeau doesn't even seem to be open to the idea of reconsidering the pipeline approval in the wake of those reports, as well as wildfires and flooding along the pipeline route, so it's hard to imagine Chrystia Freeland delivering a budget that is truly aligned with this government's pledge to keep warming below 1.5 C,” she told Canada’s National Observer.

Environmentalists have long called for a whole-of-government approach to address climate breakdown as a way of avoiding progress by one department being wiped out by another, but a more all-encompassing strategy raises concerns about who is ultimately accountable for what.

“It seems like it's an open question with this government where the buck actually stops on climate, and that could be a problem given the lack of clarity in our government's approach to actually meeting their climate promises,” said Possian.

Recently, the federal climate watchdog accused Trudeau’s government of “policy incoherence” in a series of scathing reports after finding it chased policies, like TMX, that directly undermined its own climate goals. A few days later, the Prime Minister’s Office announced the mandates of its new cabinet committees and had two climate committees with identical mandates but totally different members.

Despite multiple attempts for clarification, PMO spokesperson Cecely Roy could not identify any difference between the two.

“As we finish the fight on COVID-19 and build a resilient recovery, both committees will be able to work on policies to make sure they promote economic growth that works for Canadians and builds a cleaner, greener future,” she repeatedly told Canada’s National Observer earlier this month.

Moving forward, however, recently passed legislation could help to hold the government responsible for its action on climate change, Brouillette said.

“There definitely are concerns around accountability on climate change. Historically, we have missed every single climate target we've set for ourselves,” she explained. “However, I think a big chunk of that answer is … found within the Canadian Net-Zero Emissions Accountability Act, where one minister, Minister Guilbeault, has the responsibility to table plans that show how we are meeting our climate targets.”

That plan is expected to be tabled in March.

“I think it will be a key moment to set an important precedent in terms of transparency, accountability and rigour of the first plan to be tabled under this new climate accountability framework that we have in Canada, but also a place to attribute clear responsibility on some specific measures,” she said.

This is an essential article.

This is an essential article. We need lots more like it.
In Alberta, the issue of public pensions is in the spotlight, largely due to Kenney's decision to force all public pensions into AIMCo. Investing in fossil fuel pipe dreams is big for the Alberta Conservatives, but we can't assume progressives in my province are educated about all the reasons why that's a bad idea. Forty years of 'advantage' doesn't make for post graduate level thinking.

However, being the recipient of a 'captured pension' has woke more than a few of us up. Now its time to learn how invested in potentially stranded assets the Canada pension managers are. A corollary of that learning is the discovery that our Big Banks too are banking on big returns from the final mop up operations in our back country.

Who knows? Perhaps a few more of us will bone up on the regularity with which our fossil fools violate environmental regulations in the back country? Perhaps it will dawn on us that regulations without enforcement are nothing but window dressing to keep rural and urban Canadians equally in the dark about what happens behind that mountain, on the other side of that river?

Learning takes time. And effort. But it looks to me like the Great Mother, aka Nature, is doing her best to help us get up to speed. I'm thinking of what Christmas is going to be like for everyone in B.C. who has lost their home, or is digging through the leavings of flood waters right now. Denial is always an option. But it gets harder after you've watched a three lane highway slide into the canyon it spanned, or listened to the tragic stories of survivors who've lost everything, including relatives, to the consequences of clear cut logging on mountain slopes.

I'm going to support the Liberal projects, but keep the real targets clear in my mind and voice: DIVEST OUR PENSIONS FROM FOSSIL FUEL INVESTMENTS; REGULATE OUR BIG BANKS SO THEY AND NOT THE TAX PAYERS FACE THE CONSEQUENCES OF BANKROLLING FRACKING; SUPPORT THE WET'SUWE'TAN AND ALL LAND BASED PEOPLE WORKING TO RECLAIM THEIR TERRITORIES.

And for the love of earth, don't vote Conservative!

I'm not holding my breath

I'm not holding my breath until they have mandates spelling out base year and percentage reduction by 2030, with a couple of interim points in between.

Anything less leaves too much room for more blah-blah-blah to nowhere.

I am truly glad to see

I am truly glad to see Minister of Environment and Climate Change Steven Guilbeault at the helm of our climate change effort.
In my opinion our PM picked a great PM for that job.