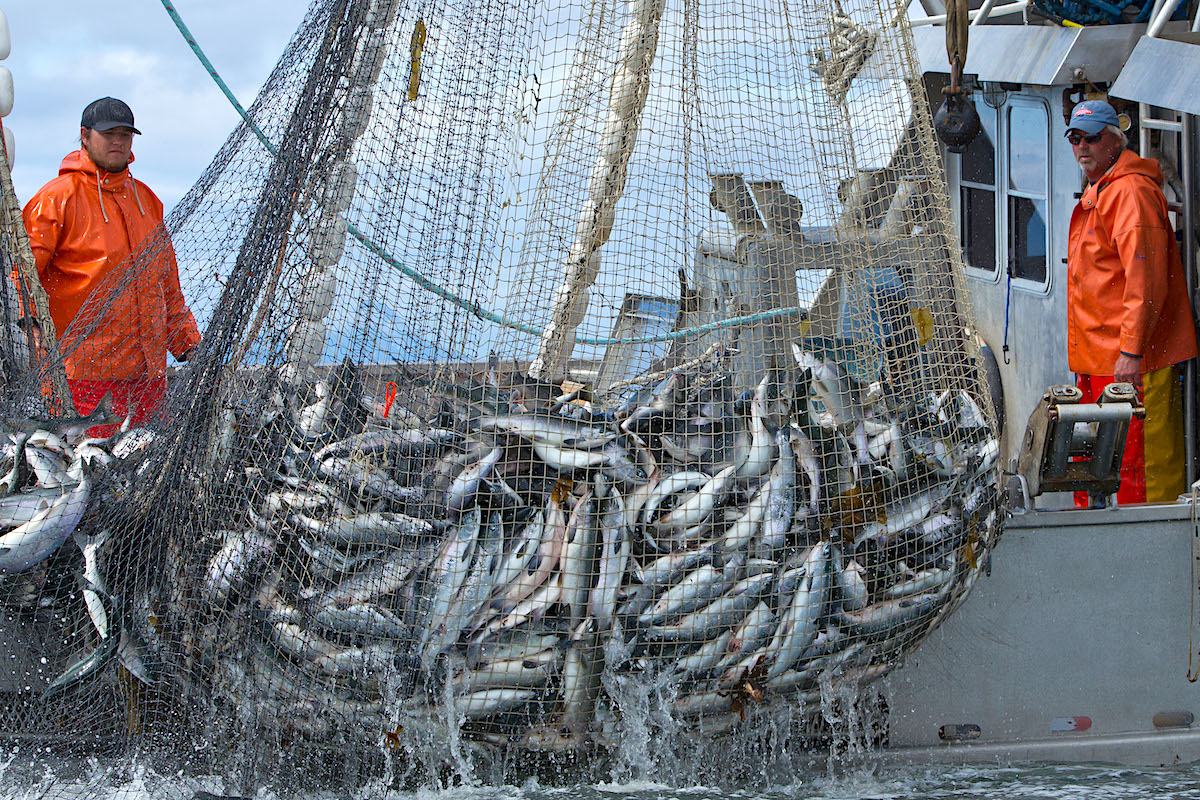 Commercial fish harvesters in southeast Alaska are netting significant amounts of threatened B.C. salmon even though the bulk of Canada’s Pacific fleet is stranded on shore to conserve plummeting stocks, a new study suggests.

Some of B.C.’s largest salmon runs navigate the waters of the Alaskan Panhandle just north of B.C. as they return to Canadian rivers to spawn, said Greg Taylor, fisheries expert and one of the authors of a new technical report for the Watershed Watch Salmon Society and SkeenaWild Conservation Trust.

Nearly 800,000 sockeye were caught in Alaskan fishing districts just north of the border in 2021, and most of those fish would be headed for B.C. waterways, in particular the critical Skeena and Nass river systems that are suffering low returns, Taylor said.

Meanwhile, 60 per cent of the B.C.’s commercial salmon fleet was shuttered in June by former federal fisheries minister Bernadette Jordan in a dramatic bid to save the Pacific salmon.

Past genetic testing suggests that 75 per cent of the Alaskan catch may involve Canadian-bound salmon, he said.

“As the pie shrinks, their portion of salmon stays the same, so proportionally they catch more of our fish,” he said.

In addition to sockeye, tens of thousands of chinook and coho were also harvested, as well as significant but undetermined numbers of co-migrating Canadian pinks, and threatened chum and steelhead, says the study, which mined various sources of existing data to get a preliminary idea of how many Canadian salmon are being intercepted in Alaskan waters.

“The Alaskan interception fishery continues unchecked,” Hill said “It is irresponsible of both countries to continue to allow this.”

“The governments of Canada and B.C. need to stand up right now and do something about this #Alaskan plunder," said @AaronHill_ of @WatershedWatch_ of the U.S. state's fisheries intercepting B.C.'s threatened salmon stocks just north of the border.

However, the current treaty expires in 2028, and historically, changes to the agreement tend to be too incremental to effect significant changes to Alaskan fisheries, he added.

The most effective way to motivate state authorities to curb the interception of Canadian salmon is for the public to challenge Alaska’s market branding of its salmon as sustainable in important markets, Taylor said.

Ironically, if Alaskan harvesters were following the state’s management regulation around threatened or depressed U.S. salmon stocks, it would be illegal to harvest the Canadian salmon, Taylor said, but Canadian salmon are “fair” game.

Over the past five years, Alaska’s interception fisheries have harvested more Nass and Skeena salmon than Canadian fishers, Taylor said.

And in 2021 when there was no Canadian commercial catch of Skeena or Nass sockeye, the Alaskan catch likely numbered hundreds of thousands, he said.

Most of the interception of Canadian salmon and steelhead is taking place in Alaska Fishery District 104, outside the panhandle and close to the border above Prince Rupert, Taylor said, adding that particular region doesn’t support significant salmon returns.

Yet the district captures between 50 and 75 per cent of Skeena sockeye caught in the southeastern Alaska fishery, and between 10 and 50 per cent of Nass salmon, the report said.

Despite the potential damage the district fishery may inflict on Canadian salmon stocks, it makes up a fraction of Alaska’s overall salmon catch, Taylor said.

The number of fishers in the district represents 10 to 25 per cent of the Alaskan fleet, the report said.

“All Alaska has to do is close that fishery and have those 50 fishermen go catch fish with their brothers and sisters in the (Inside Passage) areas,” he said.

“That way, they could catch their own fish and avoid ours.

“The solutions are simple, but they refuse to do it.”

One reason there’s a reluctance to close the district fishery is the sockeye salmon caught are worth substantially more than the pink salmon that make up the majority of Alaska’s catch, he said.

The Pacific Salmon Treaty is failing to protect B.C. salmon and the province’s harvesters, said Hill, adding a fix can’t wait until the treaty is renegotiated in six years' time.

“The governments of Canada and B.C. need to stand up right now and do something about this Alaskan plunder.”

Comment from the Ministry of Fisheries and Oceans Canada was not available before Canada National Observer’s publication deadline.

How flood upgrades could save wild salmon in British Columbia

Wonder how much the whole

Wonder how much the whole panhandle would be worth? Maybe Canada could buy it.