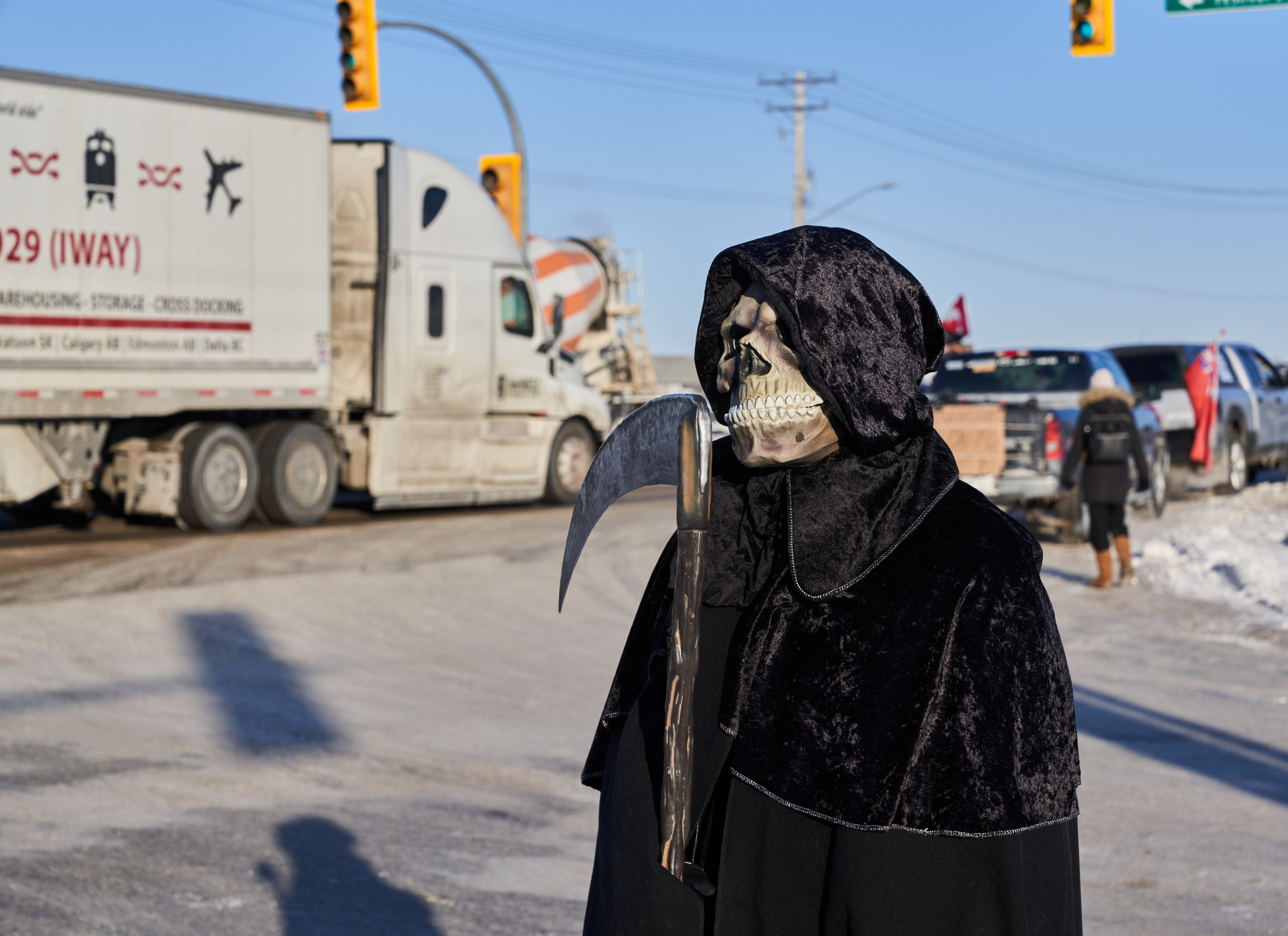 Supporters of a convoy headed to Ottawa to protest vaccine mandates cheer as trucks travel the Trans-Canada Highway west of Winnipeg on Tuesday, Jan. 25, 2022. Photo by The Canadian Press / David Lipnowski
Previous story
Next story

The near-insurrection of Jan. 6, 2021, when thousands of pro-Trump supporters swarmed the U.S. Capitol and left at least seven people dead, should have been a wakeup call for anyone who cares about the state of their own democracy.

But if the Conservative Party of Canada’s recent behaviour is any indication, it’s more than happy to keep hitting the snooze button — and continue playing to the base instincts of an increasingly unhinged fringe movement.

Conservatives’ habit of misrepresenting reality and riling up their base with false information and fake controversies, key ingredients in the toxic stew of Trumpism, has reached a dangerous new level with the truck convoy that’s currently winding its way east towards Ottawa. While that convoy was ostensibly animated by a federal vaccine mandate for truckers that went into effect on Jan. 15, its impact on supply chains and the availability of food on Canadian grocery store shelves, it has quickly mutated into something much bigger — and uglier.

Take former leader Andrew Scheer’s recent tweet, in which he declared his affinity for the convoy of truckers making their way to Ottawa to protest the government’s policy. “Trudeau is attacking personal liberty and threatening everyone's ability to get groceries because of his overreach on vaccine mandates,” Scheer wrote. “He is the biggest threat to freedom in Canada.”

If this sounds familiar, that’s because it should.

This fusion of hyperbole, hatred and fear-mongering is exactly the sort of thing the Republican Party has traded in ever since Donald Trump stepped onto that Trump Tower escalator in 2015. Since then, both he and the Republican Party he controls have routinely treated the truth and those who tried to defend it with open contempt.

Never mind that the supply chain issues that may have led to some products being temporarily out of stock have already started to ease. And yes, Canadians can go to their local grocery store and see that the shelves are, in fact, far from empty. But to borrow from Chico Marx — who are they going to believe: the Conservative Party of Canada or their own eyes?

There’s no question supply chains are stretched right now due to a combination of factors (recent floods in B.C. and droughts on the Prairies, for example, not to mention the growing percentage of truck drivers and other key employees who are sick with the Omicron variant), and that this is showing up in the form of shortages of certain products in our grocery stores. But to pretend, as the Conservative Party of Canada has for days now, this is entirely because of the federal government’s vaccine mandate for cross-border truck drivers (a similar mandate already exists in the United States) is dishonest in the extreme.

In a recent tweet, Thornhill MP Melissa Lantsman (who was once heralded as a bright, new moderate voice in the party) used a stock image of empty shelves in a British grocery store in a post that suggested “empty Canadian grocery store shevles [sic] could become a larger problem.” When people pointed out the obvious error — and deceit — she simply doubled down and directed people to her petition against the federal government’s vaccine mandate.

These sorts of blatant lies and deliberate attempts to mislead Canadians are a threat to our democracy. But what makes the CPC’s recent conduct even more dangerous is the obvious desire on the part of its key members, including former leader Scheer and potential leadership front-runner Pierre Poilievre, to provoke a portion of the Canadian public that’s already inclined towards anti-social behaviour — and direct their fury towards the prime minister.

Opinion: Will the anti-vaxxer truck convoy heading for Ottawa be our own Jan. 6 moment? asks columnist @maxfawcett. #COVID19 #Extremism #CDNpoli

After all, the convoy of truckers headed to Ottawa right now sounds an awful lot like the one that made that same trip back in February 2019 to protest the Trudeau government’s treatment of the oil and gas sector.

As Canada’s National Observer reported at the time, that convoy was marbled with white nationalists, climate change deniers and anti-immigration activists, and its hostility towards the prime minister transcended normal political boundaries. And as Caroline Orr made clear in a recent piece, the threat of political violence coming from the far right in Canada has only gotten bigger. “The anti-vaccine movement has become a vector for radicalization,” she wrote, “and national security experts are concerned about what comes next.”

In other words, we may be on the cusp of our own Jan. 6 moment.

As CTV’s Glen McGregor reported, some people involved with the trucker convoy are openly rooting for that sort of attack on Parliament to happen. And as journalist Justin Ling noted on Twitter, Canada Unity, the organizing body for the convoy, “is essentially calling for the removal of the Canadian government.”

What happens when the Governor General doesn’t remove Justin Trudeau as prime minister and dissolve Parliament, as they seem to think will happen? How many potential Corey Hurrens — the “friendly sausage maker” who rammed the gates at Rideau Hall while packing a bunch of loaded weapons — do they have in their midst? And how will they respond when they don’t get their way?

These are questions the Conservative Party of Canada’s leadership should be made to answer. They’re all the more pertinent now that people like Donald Trump Jr. and Fox News’ Laura Ingraham are drawing attention to the convoy and fanning the same flames that nearly set their own Capitol alight just over a year ago. But the answer coming from Canada’s Conservatives, if we ever get one, will probably be that their ends justify these means. If it helps them win an election, or at the very least fend off the surge on their far-right flank from the People’s Party of Canada, the Conservative Party of Canada seems content to keep pushing us down this dark road. The rest of the country has no choice but to wait and see where it takes us.

This story has been corrected to reflect that at least seven people died as a result of violence during the Jan. 6 storming of the White House.

Exactly, thinking lessons, no kidding, but unfortunately I think you're right that critical thinking skills are kind of like "people skills;" you either have them or you don't. Remember the kids in school who didn't do well on reading comprehension? Well, they went on to NOT become readers for the most part who never subscribed to newspapers or magazines either, just followed sports and their other personal interests, and so were shut out of much, but then social media offered them a platform where they found all the other people that also sucked at school.....so now we're experiencing the phenomenon of how a little bit of knowledge can be a dangerous thing. Watching the news footage it's like a rally before a sports event, celebratory, self-congratulatory, and as tribal as hell. They want to smash things mainly and yell their asses off while they're doing it. Boys will be boys after all, and these are mainly a bunch of bad ones, or at least wannabe bad ones.
And a lot of this is about the dangerous, irrational hatred of Trudeau. Social media has absolutely bred that, along with all the other right wing crap. If only we could shut it down before it does the same to fragile democracy.

I guess you missed the memo

I guess you missed the memo that our politics has officially become binary since the right wing officially lost its mind.
So in this climate you're like a Catholic apologist addressing our indigenous people.

People have the right to

People have the right to refuse to be vaccinated but there are major consequences to that decision. First, they can contaminate other people including their own family. Second, they will get eventually sick themselves and have to be hospitalized.
The numbers show that almost three quarters of people hospitalized with Covid symptoms are unvaccinated. People who refused to be vaccinated and end up using hospitals beds and resources (especially staff resources) deny access to other people who need urgent surgery, proper cancer treatment or other interventions that need to be taken care of.
I'm not suggesting that we should deny unvaccinated people hospital care, but these people should realize that their decision could mean that somebody else will get sicker, or even die because they can access the medical care that they need.
Unvaccinated people should at least stay at home if they feel sick, take all the precautions around other people (wearing a proper mask would be a minimum).
I consider protesting against people (hospital staff, doctors, scientists or even politicians) who put their life on line to help other people shameful and inconsiderate.