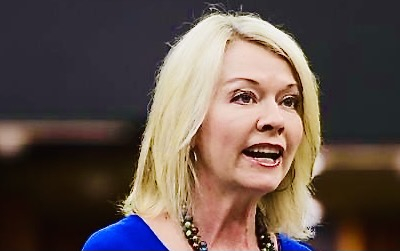 Conservative MP Candice Bergen rises during question period in the House of Commons on Parliament Hill in Ottawa on Monday, June 21, 2021. Photo by: The Canadian Press/Sean Kilpatrick
Previous story
Next story

OTTAWA — Candice Bergen says her goal as interim leader of Canada’s Official Opposition will be to strengthen the conservative movement and leave the next leader with a party that’s ready to win.

The Conservative caucus elected the Manitoba MP and former deputy party leader on Wednesday to serve as interim head after a majority of MPs ousted Erin O’Toole from the top job.

Bergen faces a caucus that has spent weeks divided and angry over O'Toole's leadership since last year's federal election loss.

She also takes on the role at a time when anti-vaccine mandate protesters have jammed downtown Ottawa, honking into all hours of the night and forcing the closure of many businesses and services.

Some Conservative MPs accused O’Toole of failing to take a clear stance on the protest, while Bergen has offered her full support to the group and dismissed reports of racism and harassment among the demonstrators as the actions of a small few.

Bergen's Tory colleagues greeted her with a standing ovation in the House of Commons Thursday as she made her debut as interim leader during question period, where she took aim at the Trudeau government for refusing to extend an “olive branch” to the demonstrators.

“Can the prime minister please tell Canadians what role he thinks the government can play and what they can do to solve the impasse?” Bergen asked.

The protesters have clogged the capital for nearly a week and say they won’t leave until vaccine mandates and other COVID-19 restrictions are abolished. Some have flown Nazi and Confederate flags, desecrated monuments including the National War Memorial, and been accused of harassing homeless shelter staff and masked residents on the street.

Prime Minister Justin Trudeau has refused to meet with them, saying Canadians elected a government to protect them through the pandemic and any attempt to subvert those election results is a “non-starter” in a responsible democracy.

Ottawa Mayor Jim Watson has also demanded an apology from several Conservative MPs and a senator for grinning and flashing thumbs-up in a photograph with protesters, calling the action an "absolute disgrace."

Deputy Prime Minister Chrystia Freeland responded to Bergen in question period, reiterating the Liberal government’s condemnation of the desecration of monuments and the displaying of hateful symbols during the protest.

“Maybe all the horns have affected her hearing,” Bergen shot back, “because I don’t know if she heard my question. … Where is the olive branch?”

Freeland replied that her hearing was fine and she clearly heard remarks by her Liberal colleague, MP Greg Fergus, who she said explained how it feels for Black Canadians to see swastikas and confederate flags in the nation’s capital.

Bergen dismissed Freeland’s response as “classic gaslighting,” adding it was “disappointing” to hear from the deputy prime minister.

“There is no one in this House who tolerates racism,” Bergen said, before repeating a frequently invoked reference to Trudeau’s wearing of blackface two decades ago.

On Monday afternoon, as the party was discussing how to respond to the protest, Bergen told some senior Conservatives in an email: "I don't think we should be asking them to go home."

She added: "I understand the mood may shift soon. So we need to turn this into the (prime minister's) problem. What will he take (as) the first step to working towards ending this?"

Bergen and the Opposition Leader's Office did not immediately respond to a request for comment about the email on Thursday.

Trudeau and Bergen spoke on the phone Thursday afternoon and the prime minister "graciously congratulated" her on the new role, said a statement from the Conservative party.

The statement said the two leaders "agreed that solutions must be found to resolve the ongoing protests in Ottawa."

The Conservative party must now start preparing to pick a permanent leader. It will be the third such race in the past five years.

Party president Rob Batherson told members that its national council will be appointing a leadership election organizing committee and will soon meet to discuss the issue.

People are already speculating about who will enter the race.

Tory finance critic and Ottawa-area MP Pierre Poilievre, known for his bombastic attacks on the Trudeau government over inflation, would be considered a strong contender if he decides to run.

Rona Ambrose, who was a cabinet minister in former prime minister Stephen Harper's Conservative government and became interim leader after he stepped down, ruled out a run on Wednesday despite many members hoping she would enter the fray.

"I have the best job in Canada, and I have no intentions to stop leading the important work that Saskatchewan people elected our government to do."

Bergen released a statement Thursday thanking O’Toole and his family for their service to the party and promised to continue the “professionalism and dedication” that he brought to the job as leader.

She also thanked her colleagues for putting their trust in her to lead the Conservative party and vowed to work hard every day to earn that trust.

This report by The Canadian Press was first published Feb. 3, 2022.

So Candice "MAGA Karen" Bergen didn't waste time to show her colours. Erin O'Toole warned that the CPC was at a crossroads and it leaves no doubt that the party chose the hard right turn.

To see what today's Canadian

To see what today's Canadian Conservative Party members are supporting, read some stories from here:

Read carefully:
"Section 2 of the Canadian Charter of Rights and Freedoms guarantees the freedom of expression, freedom of association, and the freedom of (peaceful assembly). Protests are a way for people to express themselves for or against decisions made by government or other powerful institutions.
Since you are not a (peaceful assembly) you loose your right(s) under the charter that you are touting.
You can not pick and chose what part of the Section 2 you want to use and what you wish to disregard!
If I was PM I would order arrests and take down all that is disruptive under the charter in the name of peace!