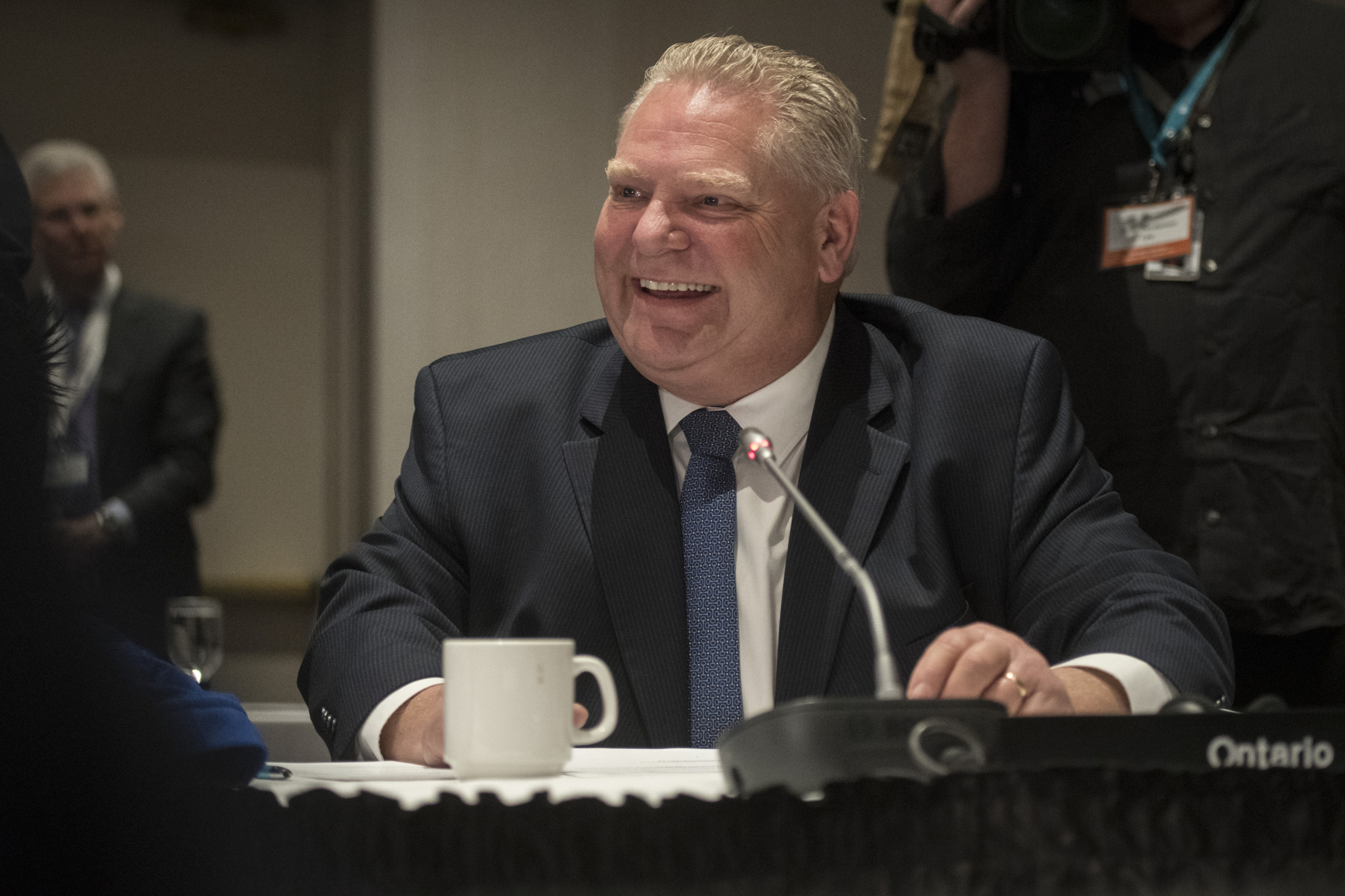 The Conservatives have turned themselves into a farm team version of American Republicans and in the process have made Premier Doug Ford look good by comparison. File photo by Tijana Martin
Previous story
Next story

Conservatives across this country largely decided it was good retail politics to align themselves with people occupying the capital and blockading major ports of entry. In addition to being offside with the majority Canadian opinion, Conservatives have spent the better part of the last month putting themselves in some rather embarrassing and largely avoidable situations.

Getting caught tweeting fake pictures of empty grocery store shelves, giving a television interview with a swastika flag in the background (while trying to downplay the very clear far-right and extremist elements of the convoy), or tweeting out videos about the “Great Reset” — a deranged conspiracy theory that has made its way from far-right circles to mainstream Conservative opinion — are a few examples that come to mind.

Canada’s Conservatives have confirmed every preconceived notion and bias that centrist and progressive voters have about the party being too firmly entrenched with the more objectionable parts of its voter base, including outright racists and extremists.

The Conservatives have turned themselves into a farm team version of American Republicans and in the process have made Premier Doug Ford look good by comparison.

The problem Ontario progressives will face come the June election is that Conservatives across this country — from premiers to any number of CPC MPs — are making Ford look absolutely reasonable. The bar has been set perilously low by other right-leaning politicians in Canada. Now all Ford has to do is to stay one notch above being the physical embodiment of a Canada Proud meme laden with misinformation and he looks like an even-keeled leader in charge.

In the debate over the federal government’s invocation of the Emergencies Act, for example, Ford stayed out of the fray for the most part, while other Conservative premiers clamoured to make their displeasure known. Alberta’s Jason Kenney even had his government make an official request for federal assistance to deal with the Coutts border blockade only to then decry the use of federal powers after having decided it was more politically expedient to do so.

By simply keeping his mouth shut while other Conservative premiers ran theirs, Ford looks as though he’s working with the federal government instead of against it. That might not be a completely accurate representation, especially since Ford’s own unwillingness to act is what prompted the need for the federal government to step in, but the optics of Ford holding his fire with the feds is undeniable.

And while those optics are likely lost on the Twitterati, it certainly matters to the large cohort of Ontarians who voted Liberal in the last two federal elections since Ford formed government in 2018, and whose votes Team Ford surely needs.

Unlike so many other Conservative premiers, Ford is also incredibly adept at using the media to his advantage, often coming across as genuinely likable. Sure, his cheesecake making was very clearly an orchestrated attempt to lean into the whole Premier Dad persona his team built for him early in the pandemic. And sure, his more recent foray into semi-professional snow-digger was another public relations stunt meant to detract from poor poll numbers. But the choreographed nature of these media gimmicks is ultimately immaterial to the fact that they work. Every time Ford tries something like this, he succeeds. His team knows it and those on the opposing teams would be wise to realize this.

Voters in Ontario have a ton of legitimate reasons to want to send Ford and the Progressive Conservatives back to the Opposition benches in June: Ontario is the only province without a child-care agreement with the federal government, Ford has mishandled this pandemic on more than one occasion, and he is profoundly unserious when it comes to climate change, to name a few.

Opinion: The Conservatives have turned themselves into a farm team version of American Republicans and in the process have made Premier Doug Ford look good by comparison. @supriyadwivedi writes for @natobserver. #onpoli #CPC #cdnpoli

Federal Conservatives have constantly tried — and failed — to paint Prime Minister Justin Trudeau as some sort of leftist radical who is wholly unfit to govern. The Conservative willingness to delve into hyperbolic attacks instead of presenting an alternative Conservative vision for government stems from the mistaken assumption that regular voters share the level of contempt for Trudeau as card-carrying Conservatives do.

Ontario Progressives should learn from the mistakes made by their federal Conservative counterparts on this front. They should ditch the over-reliance on a level of disdain for Ford that likely does not exist, especially since any knee-jerk contempt for Ford will be muted thanks to the very low bar that has been set by other Conservative politicians in this country.

Instead, both the Liberals and the NDP need to be presenting a credible case to voters as to why a change in government would be an upgrade for Ontario.

And they should have started doing it yesterday.

Latest polls show Ontario Liberals & NDP splitting 50% of intended votes between them. This is a recipe for another Ford majority.

Exactly, it's just basic math, and we're supposed to be the clever ones here....UNITE THE LEFT so we can all sleep at night.

Excellent point, and one that

Excellent point, and one that is all too frequently unmentioned in the mainstream media.

So many things wrong should

So many things wrong should Doug Ford get in again as Premier of Ontario. His formation of government controlled groups such as Metrolinx et al enable him to do so much damage and all privately as 9 times out of 10 the deals are behind closed doors and details are secret, without public consultation. THAT is not democracy. But that's what the 'Progressive' Conservative Party of Ontario does when in power. The reverberations of actions by conservative premiers after Crombie, have left devastation that was never repaired, nor has the province recovered. His gimmicks of removing charges or taxes for election purposes only mean the money has to come out of another area - usually healthcare, education, infrastructure. I'm saddened by the thought that we have no other choice as his ego will know no bounds if he is elected again.

?? Conservative premiers after Davis??? David Crombie was a Toronto mayor before heading to, IIRC, federal politics.
Ford finances his tax cuts by cutting off tax benefits to the poor that are available to better-off folk. E.g., under Ford's watch, the refundable healthcare costs credit disappeared. He also reduced the amount of $$ available for wheelchairs, mobility scooters, and repairs, so that equipment previously covered lost any contribution at all. Of course, ppl with nice workplace coverage are reimbursed 100%..
On Ford's watch, social assistance payments degraded even further, with minimal increases far below CPI increases, and far, far, *far* below real cost-of-living increases -- when they happened at all.

From the article: "Now all Ford has to do is to stay one notch above being the physical embodiment of a Canada Proud meme laden with misinformation and he looks like an even-keeled leader in charge."
Ford's never relied on "external" memes: he just lies every single time his mouth moves. That's why he was "popular" outside of Toronto: Torontonians knew full well that he lied and blamed, lied and blamed, lied and blamed. And congratulated himself. And continues to do so.

What do you mean, "No other choice?" There *is* an NDP party in Ontario! They'e actually the opposition now, IIRC!!!

Sorry, my mistake, I was

Sorry, my mistake, I was thinking of Bill Davis.

Excellent article, sums it all up, and hilarious but not so hilarious because spot on.
And not only is the bar for cons going lower all the time, they're also faced with that unusually shallow "talent" pool. Laugh emojis all around, maybe the most telling sign of conservative power finally cratering. Even in a polite society like Canada, they've resurrected the word STUPID.

I will say one thing.....that Doug Ford is a lot smarter than he looks...or else he has some advisors who can do the calculations about how the majority of Canadians feel. We got a good public education in this country, and while most of us can't do calculus....we can calculate. And what we see going on in America doesn't inspire us to listen to folks being funded by the likes of Elon Musk.
I wouldn't vote for Doug........but he doesn't strike me as solely motivated by ideological talking points and underhanded hate mongering.