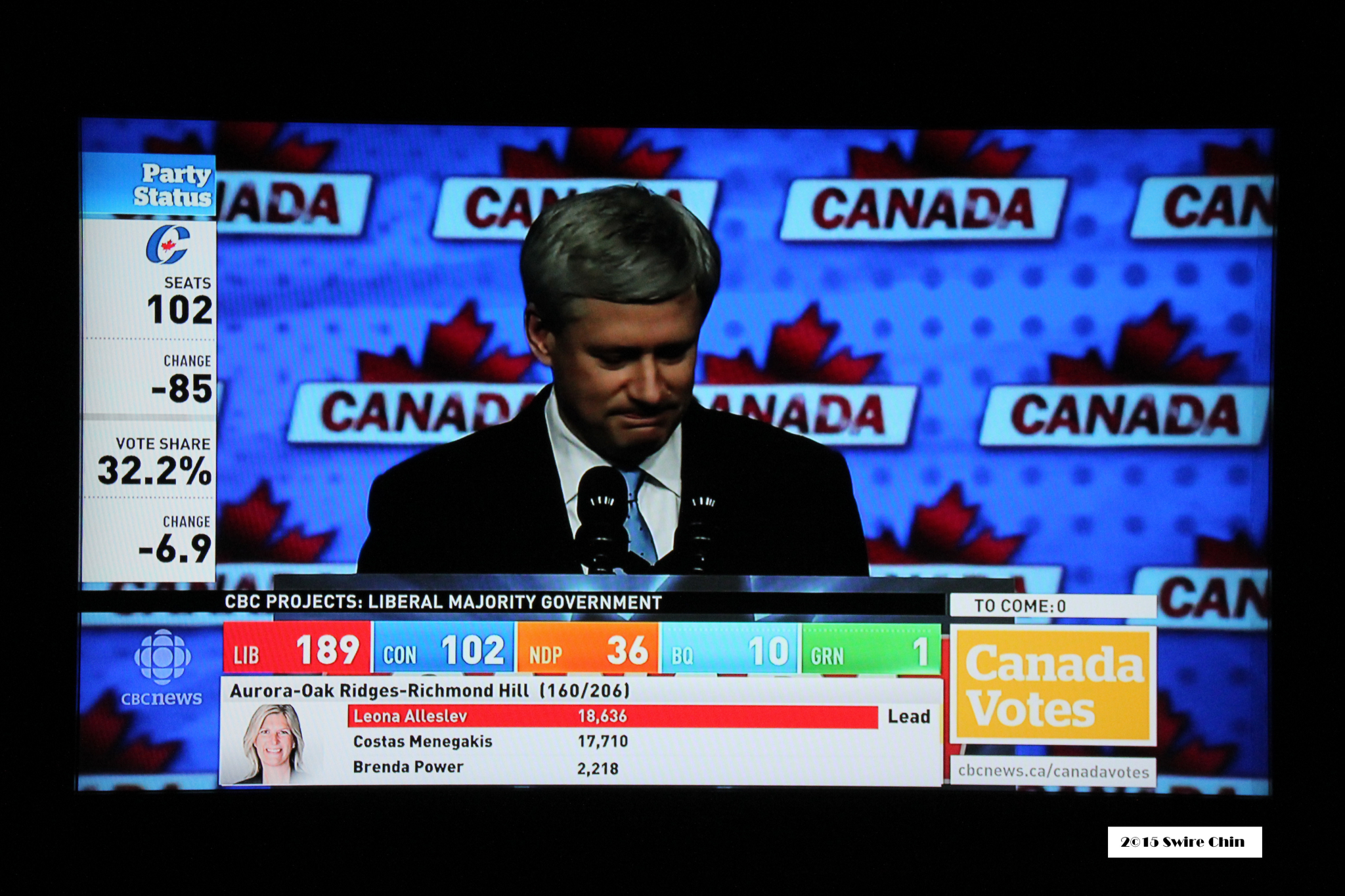 What are the prospects for the Conservatives winning the next federal election? To win, they need weak opponents and/or a strong division of the progressive vote. Photo via Can Pac Swire/flickr
Previous story

The last time the Conservative Party of Canada won a federal election was just over 10 years ago. Stephen Harper’s party won 39.6 per cent of the vote and 166 seats. He benefited from an epic setback for the Liberals under Michael Ignatieff, who lost 43 of the party’s seats and finished third behind the NDP with about 19 per cent of the vote.

What are the prospects for the Conservatives winning the next federal election? How will their choice of leaders affect things? We did some polling on this recently. Here’s what we discovered.

Today, about 40 per cent say they would consider voting Conservative, which is not a good enough starting point to imagine a victory (our last two surveys have shown 39 per cent and 41 per cent, respectively). Happily, for the party, that number was 51 per cent a year ago, so it knows it can move up if the CPC takes steps to make that happen. 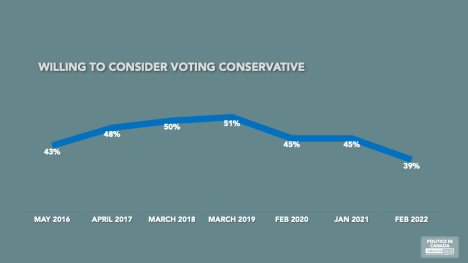 The Conservatives should be looking to grow their appeal among younger and older voters. Their current potential pool of 41 per cent in Ontario is below the result they got in 2011 against a weakened Liberal Party. They are 13 points back of the Liberals among self-described centre voters and 20 points back among urban voters. To win in these conditions, they need weak opponents and/or a strong division of the progressive vote. Both are possible, but it’s best not to bet everything on what happens to others when there are things you can do to improve your own chances. 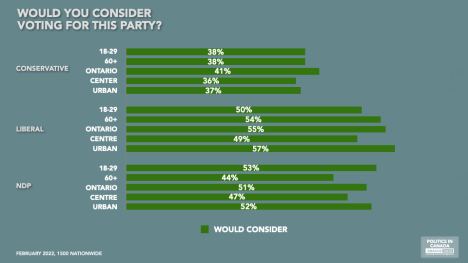 So what kind of Conservative leader would have the best chance to build a coalition that would lead the country? We explored this in a national poll of 1,500 Canadians last month and here’s what we found.

What about today’s Conservative voters?

Let’s start with today’s Conservative voters, who in our recent polls number roughly 30 per cent to 33 per cent. What would motivate them and what would turn them away?

Opinion: For the federal Conservatives to win power, writes @bruceanderson, they must promise secular government, interesting and appealing economic ideas, an unqualified commitment to equal rights for all and a credible climate policy. #cdnpoli #CPC

• More than anything else, today’s Conservative voters want a leader focused on economics: the cost of living, economic growth and taxes and spending. A little bit lower down, but still pretty motivating, is cutting regulations and the size of government.

• The biggest turnoffs: a leader who believes gay is a choice to be discouraged or that climate change is a hoax. More than half of current Conservative voters would walk away if the party chose a leader who offered those thoughts.

• Twenty per cent would be enthusiastic about a Christian faith-oriented leader — but it would push away 25 per cent.

• Similarly, 26 per cent of current CPC voters would be enthused about a leader who makes it a priority to ensure white people don’t lose power, but 34 per cent say they wouldn’t consider the party with a leader who promoted that idea.

• There’s a lot of interest in a leader who wants a younger, more diverse party and for a female to lead the party.

• Finally, 39 per cent are motivated by the idea of a leader who wants to do more to promote Canadian oil and gas, while 13 per cent wouldn’t support the Conservatives in that situation. 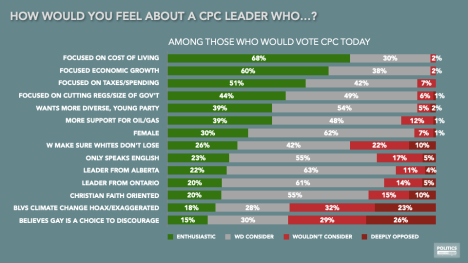 What about the “accessible Conservative voters”?

If we widen the aperture and look at the 39 per cent who say they might consider voting Conservative, the picture is pretty similar. An economic focus builds enthusiasm, while race, faith, orientation and climate are topics that put votes at risk. 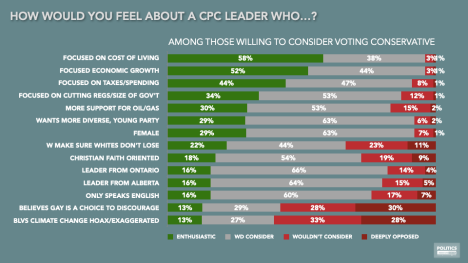 What about the risk of losing votes to the People’s Party of Canada?

Some Conservative organizers are naturally concerned about the risk of their party losing votes to Maxime Bernier’s People’s Party. While our sample size is small, our analysis shows PPC voters also prioritize economic, tax and fiscal policy. They show more interest in an oil and gas agenda and are less motivated by the idea of a more diverse, younger party.

What about winning votes in Quebec?

The 2011 election is often referred to as an Orange Wave because of NDP leader Jack Layton’s success in attracting votes away from the Liberals, especially in Quebec. But in the last 10 years, the NDP brand has lost lustre in the province and, meanwhile, Conservative politicians have shown they can win seats, including provincially.

The choice for Conservatives, if they are thinking about how to win some seats in Quebec, is pretty clear: focus on the cost of living, economic growth, taxes and spending. The worst scenario would be a leader who is Christian faith-oriented, unilingual, biased against gay people and disinterested in tackling climate change. 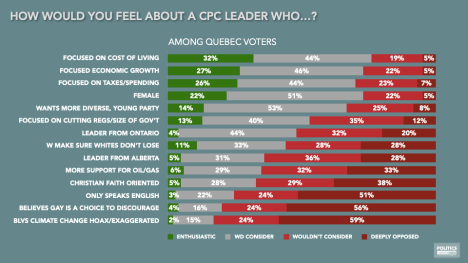 Conservatives can build a bigger coalition by focusing on conservative economic ideas. They face more risk than reward if they choose a leader who seems tempted by Christian faith-based issues such as conversion therapy, or one who is not interested in serious climate change policy.

There are no doubt other issues that may well come into focus — including national security, health and pandemic measures, and law and order — which we didn’t probe in this survey. On each of those, perceptions of the parties and the policy solutions are likely to be in flux.

But for the moment what is clear is that if the Conservatives are going to rely on something other than a dislike for their opponents, they must appear more like a party that would offer secular government, interesting and appealing economic ideas, an unqualified commitment to equal rights for all, and credible climate policy, especially if they are going to promote more oil and gas development.

So, the ideal CPC leader

So, the ideal CPC leader should offer "secular government, interesting and appealing economic ideas, an unqualified commitment to equal rights for all, and credible climate policy, especially if they are going to promote more oil and gas development." How can you have a credible climate policy and promote O&G development? That's the same nonsense promoted by Trudeau. Given that any recent progress on carbon reduction in Canada has been sucked up by the O&G sector, and IPCC reporting repeatedly states that to have any chance of limiting the effects of Climate Change to manageable levels, we need to stop O&G development, you'd think that we'd see a halt in statements of this sort. But, no, we keep talking as if 'the emperor still has cloths". Mr. Anderson, I doubt centrist voters are going to believe any so-called leader who promotes such stale nonsense. It certainly won't cause anyone to move from Liberal nonsense dispenser to a Conservative one.

Agree absolutely, James. The O&G sector in Canada is an albatross that will take decades to get off our backs. When our leading banks, insurance companies, government organizations invest money into this sector for the sake of share holders, it's no wonder whomever becomes leader of any federal political party in Canada is going to be 'swayed' by those corporate voices. And they will be around for a lot longer than any of us even care to dream. A nightmare that unfolds daily, emotes lies and misinformation to continue it's mastery of the monetary world, there isn't one Conservative leader you could vote in today that would or could put a halt or even a temporary hold on O&G activities. Same goes for any Liberal or NDP leader. It won't happen until the masses finally in one voice say, NO. The corporate warlords are in charge of just about everything any country proposes to do. Yes, even Putin. His masters have told him that the end of oil and gas will never happen and he is to make sure of that for Russia. Besides, the Conservative Party of Canada is a western rump party that does not represent the majority of the country anyway hence all the breakaway conservative parties in many provinces. No easterners, no Quebecois - only Alliance members considered for the CPC. And, the more right-wing and Liberal hat-ing the better.

Harper had the makings of a

Harper had the makings of a conservative despot - closest we've come in modern times. Conservatives who try to follow his formula in this era are facing much more pushback than previously. The horrible example of Trump and the GOP is tainting the pool in Canada for their kind of demagoguery. Even though it seems apparent we are tainted by similar racist sentiments thanks to our white European rots - at least we don't have (much) slavery in our history And I am happy to observe that the recent GOP fueled "convoy" didn't arouse al that much support in Canada.,
What I find peculiar is that Canadian conservatives, indeed most European right wingers have aligned themselves with the Trumpists - against everything with nothing positive or constructive to offer. Can you actually rule a nation by just sitting on your behind and whining and complaining?

Apparently Betsy, our CPC members, who are still controlled by Harper - time and distance have not changed his power within the party at all, truly believe their brand of right thinking and control is where the power is to be found. (Hence Harper's total approval of Trump back in 2018 long after he left Ottawa.) Too many nations over the centuries have had their form of democracy usurped by a band of far right wing manipulators. Canada is just another nation where another group of far right power hungry, disinformation and misinformation mongers have managed to find centre stage for a bit. Anyone who thinks Charest has even a remote chance of becoming the next leader, should think again. Remember Stephen Harper resigned from the Conservative Fund board to free himself up to block Jean Charest’s campaign for the party leadership back in 2020. And now today, 'Charest won’t be intimidated by ‘spin’ that Harper’s opposed to his potential leadership bid': https://www.hilltimes.com/2022/02/28/charest-wont-be-intimidated-by-spin....
The only person(s) who will be in the running will be Harper approved, just as Scheer and O'Toole were - until they tried a moderate twist to the Harper agenda for which they were immediately turfed! Petro Pierre has been made into a Harper clone and insofar as I can see, the majority of far right CPC members will more than likely be prompted to vote him in.