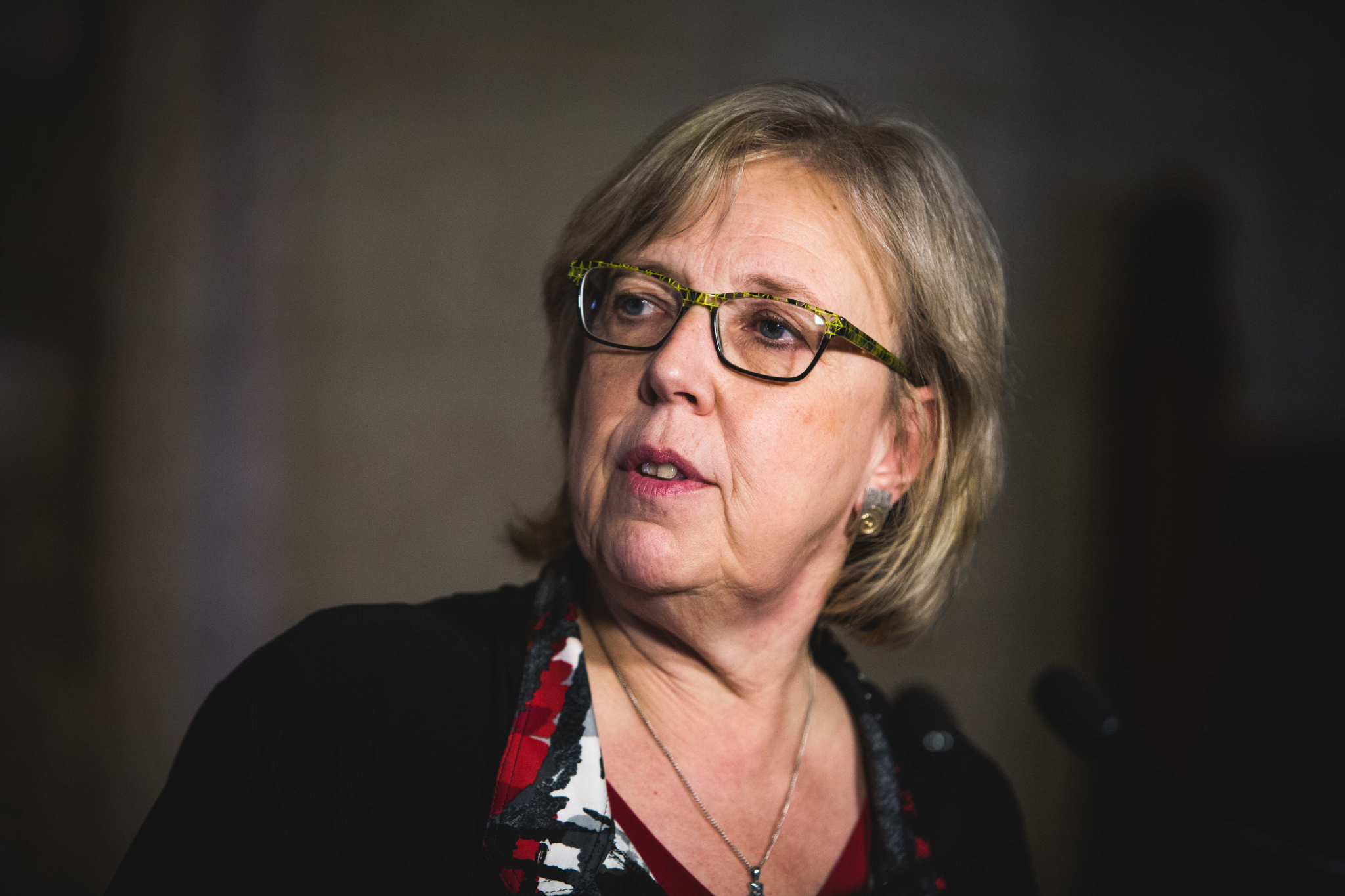 Canadian politicians and lobbyists are using the crisis in Ukraine to advocate for more fossil fuel expansion in a move of “crass opportunism,” said Green Party parliamentary leader Elizabeth May.

Since Russia’s invasion of Ukraine, the House of Commons and social media have reverberated with claims from politicians and fossil fuel industry representatives that Canadian oil and gas is needed to replace the 40 per cent Europe imports from Russia.

“In the context of Ukraine and what they need for support and for help, I think it's absolutely vile that anyone would want to use this humanitarian crisis, this threat to world peace, as an excuse for bolstering their economy and their product,” May told Canada’s National Observer.

“Nobody in the EU or Germany or Ukraine is saying, ‘If only Canada would build pipelines,’” said May. “If that was a thing, you think they might mention it.”

As Guilbeault told Canada’s National Observer early last week, the best way to improve the energy security of European countries is to simply reduce dependence on oil and gas “regardless of where it's coming from.”

Building expensive fossil fuel infrastructure to transport Canadian oil and gas to Europe would take years and is likely not an investment European countries are interested in when other options exist, like extending the life of coal and nuclear power plants, temporarily conserving energy and scaling up renewable energy production, said Kathryn Harrison, a professor of political science at the University of British Columbia.

These facts have not stopped politicians from advocating for fossil fuel expansion, even after a landmark report by the United Nations Intergovernmental Panel on Climate Change (IPCC) detailed countless “unavoidable” risks humanity will face in the next two decades as a result of climate change.

Last week, Conservative MP Michael Chong rose in question period and said Canada needs to fix its “broken” pipeline approval process “so that we can come to the assistance of European democracies by replacing Russian gas with Canadian natural gas.” In the same session, Conservative MP Greg McLean said the federal government’s “choices on killing Canadian energy projects has funded Russia’s invasion of Ukraine” and falsely stated that Canada “sends half a billion dollars per year to Russia to import their oil.” According to the Canada Energy Regulator, the last time Canada imported Russian crude oil was 2019.

After publication of this article, McLean's office clarified that he was referring to just under $380 million in oil and other petroleum products imported from Russia in 2021 — generally in the form of lighter oils to Quebec, Newfoundland and Labrador and Ontario. McLean raised the issue again on March 2 in the Standing Committee on Natural Resources, and Natural Resources Minister Jonathan Wilkinson responded that imports of Russian “petroleum products that are derived, that are either partly or wholly refined, including things like lubricants and motor oils" are now in the process of being banned.

Canadian politicians & lobbyists are using the crisis in Ukraine to advocate for more fossil fuel expansion in a move of “crass opportunism," said @ElizabethMay.

The Canadian Association of Petroleum Producers, the country's largest oil and gas lobby group, called last week for the federal government to make a "clear commitment" to grow Canadian oil and gas development and exports in light of the situation in Ukraine.

“It's actually extremely distressing to see once again, the week of the publication of an IPCC report that has been described as ‘an atlas of human suffering’ in the face of climate disaster, to see some politicians echo this grotesque spin from the fossil fuel industry,” said Caroline Brouillette, national policy manager of Climate Action Network Canada.

“We're seeing here a classic use of the fossil lobby's playbook, which is when there's a crisis that makes people feel vulnerable and destabilizes the current order of things, (it uses) that as an opportunity to further its own interests,” she said.

Brouillette says energy security is not possible without an energy transition and pointed to Germany’s accelerated plans to end its dependence on Russian oil and gas by expanding renewable energy.

Germany — which currently gets about half of its natural gas and coal from Russia and a third of its oil — recently halted the certification of a natural gas pipeline that would transport gas from Russia to the EU in response to Russia’s invasion of Ukraine.

As the crisis in Ukraine continues to unfold and politicians and lobby groups continue to push for fossil fuel expansion, we can’t lose sight of the links between war, climate change and fossil fuel dependence, said Brouillette.

This article has been corrected to clarify MP Greg McLean's statement in question period on March was referring to just under $380 million in oil and other petroleum products imported from Russia in 2021. The number was derived by McLean's office from the Canadian International Merchandise Trade Database for 2021 imports from Russian Federation.

Same petroleum push in the U

Same petroleum push in the U.S.
"'As crisis looms in Ukraine, U.S. energy leadership is more important than ever,' the American Petroleum Institute, the powerful industry lobby group, wrote on Twitter with a photo that read: 'Let’s unleash American energy. Protect our energy security.'"
"U.S. Oil Industry Uses Ukraine Invasion to Push for More Drilling at Home"
https://www.nytimes.com/2022/02/26/climate/ukraine-oil-lobby-biden-drill...
"Climate Fears on Back Burner as Fuel Costs Soar and Russia Crisis Deepens"
https://www.nytimes.com/2022/02/23/business/economy/russia-ukraine-energ...
Whatever the American Petroleum Institute does, Canada's version, CAPP, follows suit.
*
Naturally, the oil lobby is blaming Greta and her merry band of utopian climate activists for enriching Putin and funding his war against Ukraine.
Shell, BP, and Exxon have filled their pockets in Russia and enriched Putin's govt. No criticism from the "ethical oil" crowd. No, it's all environmentalists' fault.
Where were the "ethical oil" boosters when Russia, the Saudis, and China invested in Canada's oilpatch? Deafening silence.

Article: "Conservative MP Greg McLean said the federal government’s 'choices on killing Canadian energy projects has funded Russia’s invasion of Ukraine' and falsely stated that Canada 'sends half a billion dollars per year to Russia to import their oil.' According to the Canada Energy Regulator, the last time Canada imported Russian oil was 2019."

"Canada did import about 10,000 bpd of petroleum products from Russia last year, about 50% made up of gasoline and gasoline blends... Estimates of the value of last year’s petroleum imports from Russia were about $350 million, according to data compiled by the Business Council of AB. The council also said that oil and oil product imports from Russia reached as high as $884 million in 2019."
https://financialpost.com/commodities/energy/oil-gas/finish-the-symbolic...
*
Can anyone find a table/dataset of Canada's annual imports of crude oil and refined petroleum products by source nation? I searched the Canada Energy Regulator and Statistics Canada websites. No luck. The federal govt's datasets are an unholy mess.
I shall email the CER and StatsCan for advice. A reply should take only a few months.

Update: OK, I found the data.

Amazing that nobody seems to

Amazing that nobody seems to be re-posting Peter Tertzakian's Postmedia column from 3 years back about "If you want an energy transition, start a war". He re-posted it at his company web site: