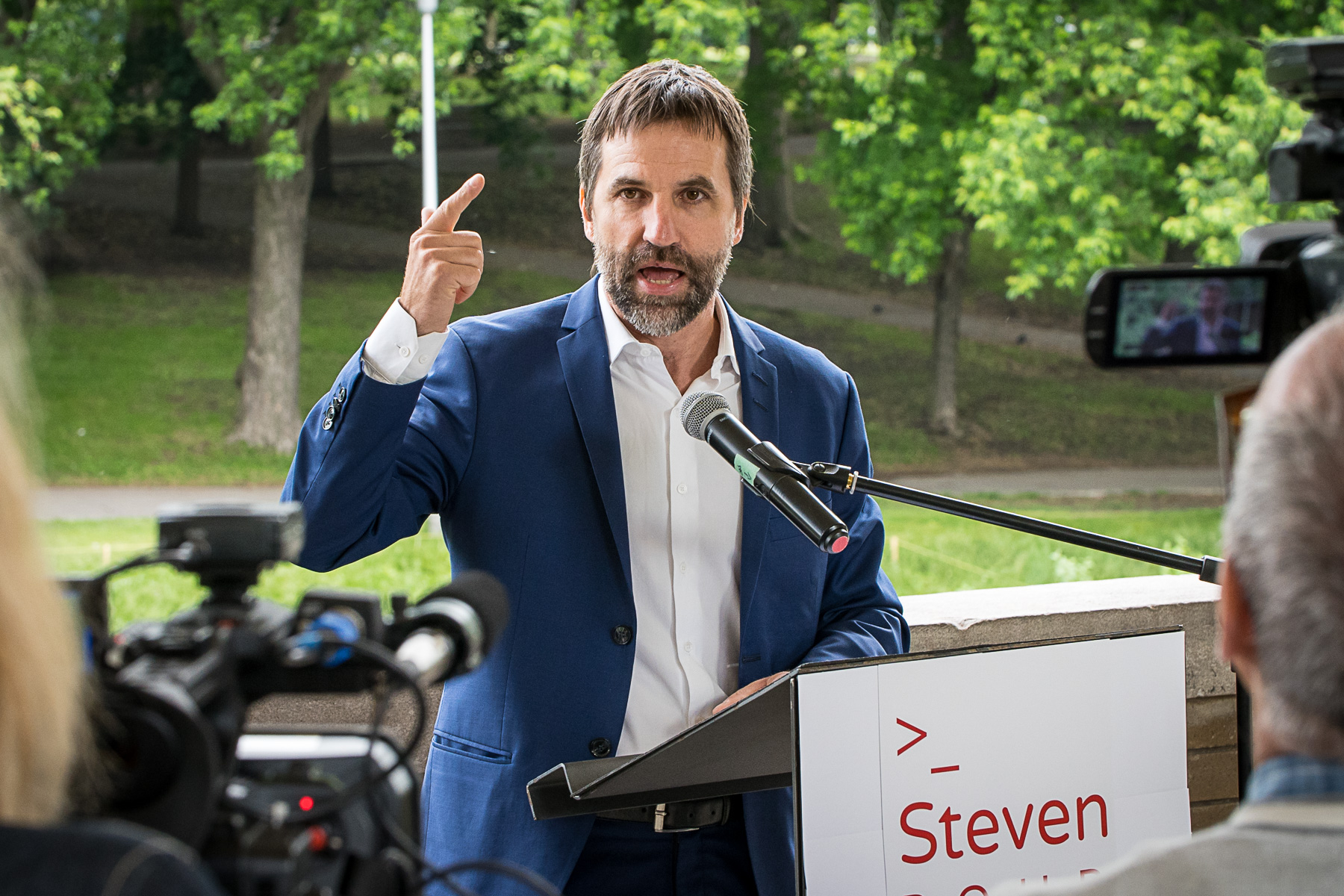 Environment Minister Steven Guilbeault says the way out of an energy crisis triggered by Russia's invasion of Ukraine is to reduce dependency on fossil fuels. File photo
Previous story
Next story

Canada’s environment minister is doubling down on his stance that increasing production and exports of Canadian oil and gas isn’t a solution to the looming energy crisis in the wake of Russia’s invasion of Ukraine.

“The solution is to move away from fossil fuels,” Steven Guilbeault told Canada’s National Observer. “That’s how we ultimately reduce our dependency.”

His comments come after the United States announced a ban on imports of Russian oil, natural gas and coal in yet another effort to strangle the economy and weaken the power of Russian President Vladimir Putin.

The U.S. move, which President Joe Biden characterized as “another powerful blow to Putin’s war machine,” followed Canada’s announcement of a ban on Russian oil imports last week. Canada hasn’t imported oil from Russia for several years; the ban was a symbolic gesture to pressure other countries to follow suit.

The U.S. imports upward of 600,000 barrels a day of Russian oil, accounting for only about eight per cent of its total. “Americans have rallied … to support the Ukrainian people and made it clear we will not be part of subsidizing Putin’s war,” said Biden, also noting the U.S. produces far more oil domestically than all of Europe combined, making it possible to lock out Russian energy when European countries cannot.

“But we’re working closely with Europe and our partners to develop a long-term strategy to reduce their dependence on Russian energy as well,” Biden said. Europe depends on Russian oil for about a third of its supply.

The U.S. move prompted a flurry of commentary from politicians, pundits and at least one editorial board suggesting Canadian oil should come to the rescue in the event of shortages in the U.S. and Europe. “Hey, America, look up north,” suggested a Globe and Mail editorial headlined, “The world needs more Canadian oil and gas.”

Alberta Premier Jason Kenney has been pitching his province’s oil since Russia invaded Ukraine late last month, tweeting Thursday: “Alberta is ready, willing and able to be a key part of the solution to the global energy crisis.”

Not so, said Guilbeault. “The reality is, it's not like oil is in Canada just waiting for this moment to happen and we've kept all the export capacity on trains open for the one day where this might happen,” he said. Canada doesn’t have much export capacity to move more oil to the U.S., and building that capacity, whether by pipeline or rail, takes years. When it comes to Europe, it’s equally infeasible — and unwanted.

“We’ve heard loud and clear from Europeans that fossil fuels (aren’t) the way to our climate goals. They’re doubling down and they see this crisis as an opportunity to accelerate the transition to a low-carbon economy,” says Steven Guilbeault.

“We’ve heard loud and clear from Europeans that fossil fuels (aren’t) the way to our climate goals,” he said. “They’re doubling down and they see this crisis as an opportunity to accelerate the transition to a low-carbon economy.”

Canada doesn’t have the capacity to increase exports to the European market, and refineries on the other side of the Atlantic aren’t equipped to process the heavy crude that comes from Alberta’s tarsands. Increasing that capacity and retrofitting refineries would be expensive and long-term, he said. “The need is short-term.”

Canada can, however, play a role in supporting Europe’s energy needs by, for example, sharing green technology and supporting countries as they transition to renewable energy, he said.

A change to the headline was made to more accurately reflect what the environment minister said and the substance of the article.

"Canada did import about 10,000 bpd of petroleum products from Russia last year, about 50% made up of gasoline and gasoline blends... Estimates of the value of last year’s petroleum imports from Russia were about $350 million, according to data compiled by the Business Council of AB. The council also said that oil and oil product imports from Russia reached as high as $884 million in 2019."
'Finish the symbolic move, go all the way': Canada's ban on Russian crude oil will be expanded
https://financialpost.com/commodities/energy/oil-gas/finish-the-symbolic...

Again, we need to distinguish between crude oil and refined petroleum products.

IN the short term, Russian

IN the short term, Russian supplies to North America will need to be replaced by 'moral suppliers'. Come on down Canada!
Yes, we all need to use less of these products, but the sanctions take place immediately (fast) and displacement to alternatives is not immediate (slow). Canada can bridge that gap.
Elizabeth May, Guilbeault and co are just taking advantage of a good marketing opportunity., as is Jason Kenney.

No such thing as moral

No such thing as moral climate change or friendly oil spills. Ethical oil is a oxymoron. Here and around the world, the O&G industry is banking on climate disaster.
The Chinese, Russians, and Saudis -- all bad actors with bad human rights records -- are all invested in Canada's O&G industry.
Conversely, Shell, BP, and Exxon filled their pockets in Russia and enriched Putin's govt. "Canadian banks, insurance companies have poured millions into Russian oil and gas" (National Observer, March 2nd 2022). How ethical is that?
*
In 2020, the U.S. was a net petroleum exporter.
Crude Oil: 5.9 MMbpd
Products: 2.0 MMbpd
Total: 7.9 MMbpd
https://www.eia.gov/dnav/pet/pet_move_impcus_a2_nus_ep00_im0_mbblpd_a.htm
More than enough to cover supply from Russia.
*
Crude from Russia represents a small share of U.S. crude imports. Canada currently imports zero crude and a modest volume of refined products from Russia. The U.S. and Canada could source refined products from elsewhere — or boost refining capacity at home.

"Ethical oil" is greenwashing.
Oil markets don't worry about ethics. No one fills up from the Ethical Oil pump. Refineries and consumers buy the cheapest product that meets their needs.
New Brunswick's Irving refinery has been a Saudi customer for decades. Not going to stop for human rights.
How is it ethical to sell oil to Chinese refineries, but unethical to buy Saudi oil? How is it ethical to sell military vehicles to the Saudis, but unethical to purchase their oil?
An argument of convenience.
*
Even using the industry's gross under-estimates, Canada's oilpatch is the fourth most carbon-intensive on the planet, behind Algeria, Venezuela, and Cameroon. Almost twice the global average. Burning LESS Canadian heavy oil is a net benefit.
Rystad Energy: "Among the top 10 oil and gas producing countries, Canada had the highest CO2 emission intensity per barrel of oil equivalent."
*
- Oilsands mines and leaking toxic tailings ponds devastate landscape and wildlife, and threaten human health.
- In 2016, the AER found pipeline operators were "insufficiently trained or failed to detect leaks" — and in one third of cases it studied, it took on average 48 DAYS for companies to respond.
- Thousands of inactive and orphaned oil and gas wells in need of clean-up across the province bear testament to AB's slipshod regulations. Some have stood neglected for decades— a "testament to feeble regulation".
- "Canada's oil patch has nearly 100,000 suspended wells, neither active nor capped, and they're a worrying source of planet-warming methane." "These Zombies Threaten the Whole Planet" (NY Times)
- "Alberta issues 97% of reclamation certificates without ever visiting oil and gas sites" (The Narwhal)
- "Many of Alberta's 'reclaimed' wells aren't actually reclaimed: government presentation" (The Narwhal)
- Canadian refineries produce far higher levels of pollution but less oil compared to U.S. refineries.
- Suncor and U.S. refineries export petcoke from AB oilsands to developing nations as a cheap, lethal substitute for coal. Darkening skies and destroying lives.
- Industry and govt are running out the clock on AB's endangered caribou herds, while shooting and poisoning wolves, with untold collateral damage.
- AB's oil & gas industry has barely started to fund its clean-up liabilities: north of $260 billion.
- The industry is turning to taxpayers for bailouts while endlessly milking govts for subsidies.
- Endless oil spills.
- "Oil sands toxins growing rapidly"
- Heavy-oil pollution forced Peace River farm families to abandon their homes. "Families forced from homes settle with Baytex Energy" (CBC)
- Toxic leaking tailings ponds: 220 square km and growing.
- Canada's oil & gas industry grossly under-reports its emissions — of all types.
- Ask Fort McKay residents about oilsands pollution.
- The Alberta Energy Regulator (AER) is a joke. "On its fifth anniversary, Alberta Energy Regulator has made little progress" (Edmonton Journal)
- "Alberta enforcing fewer than one per cent of oilsands environmental violations: Report" (Global News)

So much for ethical oil.
Is Canada a moral supplier of asbestos? Tobacco? Landmines?

I note the notice of a

I note the notice of a correction to the headline; however, the amended headline -- Environment minister highlights clean energy export as main solution to European energy crisis -- is still not in sync with the article content. Guilbeault did not say "clean energy export" (whatever that means). As the article states, he said that Canada could play a supporting role (in the transition) and "share green technology" (whatever that means). Both notions are curious simply because Europe's "clean energy" tech, it seems to me, is generally far ahead of Canada's.

Also, I note, with interest, that Guilbeault is quoted refering to the black dirt by the non-PC term "tar sands".

It will astound Canadians how

It will astound Canadians how quickly and deeply Europe will wean itself from Russian fossil fuels (massively in one year, then continuing the process for another four years) while maintaining course toward diminishing all carbon imports -- but booting up the schedule by a decade. Keep your eyes on Germany and England and other key European players.

Investors need to pay attention. It is a real shame that Canada is so stuck in last century's carbon mind set, and is habitually late arriving at any function that tries to correct the course. Being late decarbonize means less opportunity to advance as a nation, let alone maintain our current levels of well being.

The feds need to stop fearing vocal oil interests who would take a considerable hit if the subsidy pipeline was plugged. Fear instead consumers who really do need alternatives, the top of the list being a crash program to electrify everything while offsetting the personal cost, including jobs shifting to greener pastures or seniors on a pension trying to replace gas appliances.