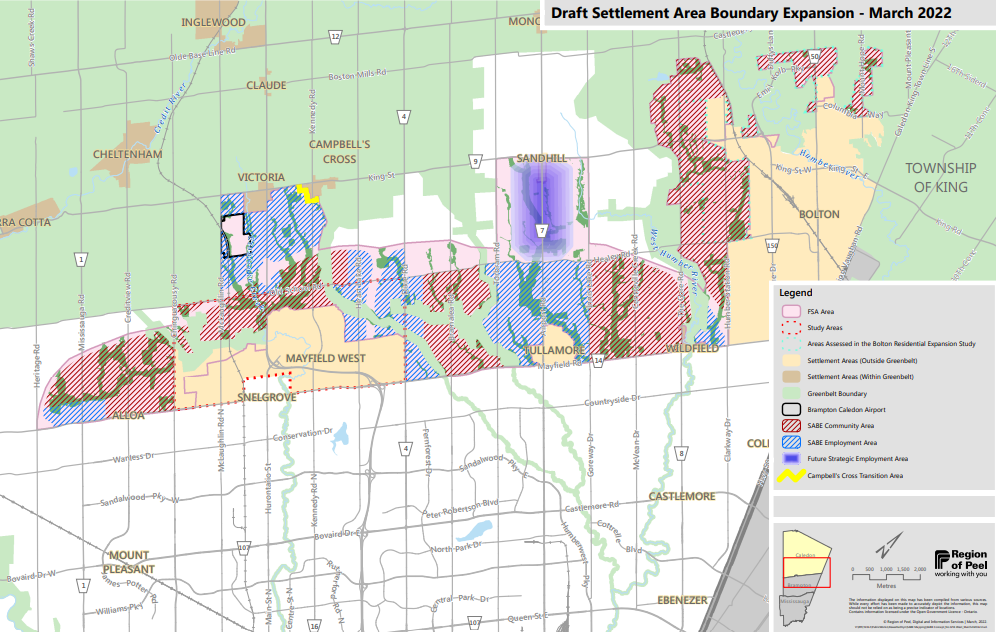 This map shows the areas where Peel Region, which lies north and west of Toronto, will expand its urban boundaries as the population is expected to balloon in coming years. (Regional Municipality of Peel)
Previous story

Peel Region will expand its urban boundaries by 11,000 acres to accommodate expected population growth, bucking a trend of nearby municipalities that have defied the provincial government’s push for sprawl.

Councillors representing the Regional Municipality of Peel, which lies west and north of Toronto, voted Thursday to open up a swath of land between the current urban border and Ontario’s protected Greenbelt for development despite vocal opposition from local environmental groups.

Population estimates project the region, which comprises Brampton, Mississauga and Caledon, will grow by 700,000 people by 2051. Peel, like surrounding areas, has seen skyrocketing housing prices and population growth well beyond previous estimates. It’s expected to intensify in the coming decades.

The Ontario government, led by Premier Doug Ford, mandated municipalities in the Greater Golden Horseshoe Area (GGHA), the densely populated and rapidly growing swath of land that stretches from Niagara north to Simcoe County and east to Peterborough, to submit plans for growth by July 1 this year. Many have been scrambling to plot out the next 30 years, during which time the population of the GGHA is expected to balloon to nearly 15 million.

The Progressive Conservative government has consistently pushed for larger urban areas and a home-building blitz to tackle a housing crisis that only promises to worsen in the coming years. Critics argue the housing problem can’t be solved by a mere construction boom, but rather requires a wide range of measures that take into account the need to protect the environment and agricultural land and minimize urban footprints.

Several municipalities have resisted the province, voting to keep present urban boundaries and build denser neighbourhoods. In November 2021, Hamilton councillors rejected staff recommendations and froze the city’s borders, opting to instead use densification and infill to meet requirements to accommodate more people.

That decision drew the ire of Housing Minister Steve Clark, who accused the council of burying their heads in the sand in a strongly worded opinion piece in the local paper and indicated he would consider overriding the decision. Local conservative MPP Donna Skelly called the decision an “anti-housing and anti-growth ideology that is preventing homes from being built and driving up home prices” in a missive at Queen’s Park.

Halton Region, next door to Hamilton, followed suit in February, opting to keep its urban boundary in place until at least 2041.

It was a trend environmental and anti-sprawl groups hoped would continue as Peel Region grappled with its future.

Chief planner Adrian Smith said the plan, endorsed by all but one councillor in Thursday’s vote, sought a balance between expansion and densification, bearing in mind the need to address climate change and protect agricultural and rural land. In the plan, the majority of population growth will occur within existing boundaries, he said, and 72 per cent of homes will be multi-unit dwellings, a significant increase from 40 per cent in 2021.

Ontario's Peel Region will expand its urban boundaries to accommodate expected population growth, bucking a trend of nearby municipalities that have defied the provincial government’s push for sprawl. #onpoli #onelxn

The expansion will accommodate about 175,000 people in a mix of residential dwellings, alongside buildings with commercial and industrial uses.

Stop the Sprawl Peel, a community group that has campaigned against the expansion, bemoaned the regional council’s decision, noting more than 1,300 emails, letters and delegations from the public had been submitted in opposition.

“Council has shown a stunning lack of consistency when it comes to alignment with existing policy (climate, food, transportation, housing), no consideration for public concerns, and a prioritization of developer desires in the short and long-term,” read a statement from the group released after the vote.

Opponents of the expansion also requested the council defer its decision until after the June 2 election, given that parties vying against Ford’s Progressive Conservatives have indicated they wouldn’t continue with the present growth planning process. Council denied that request.