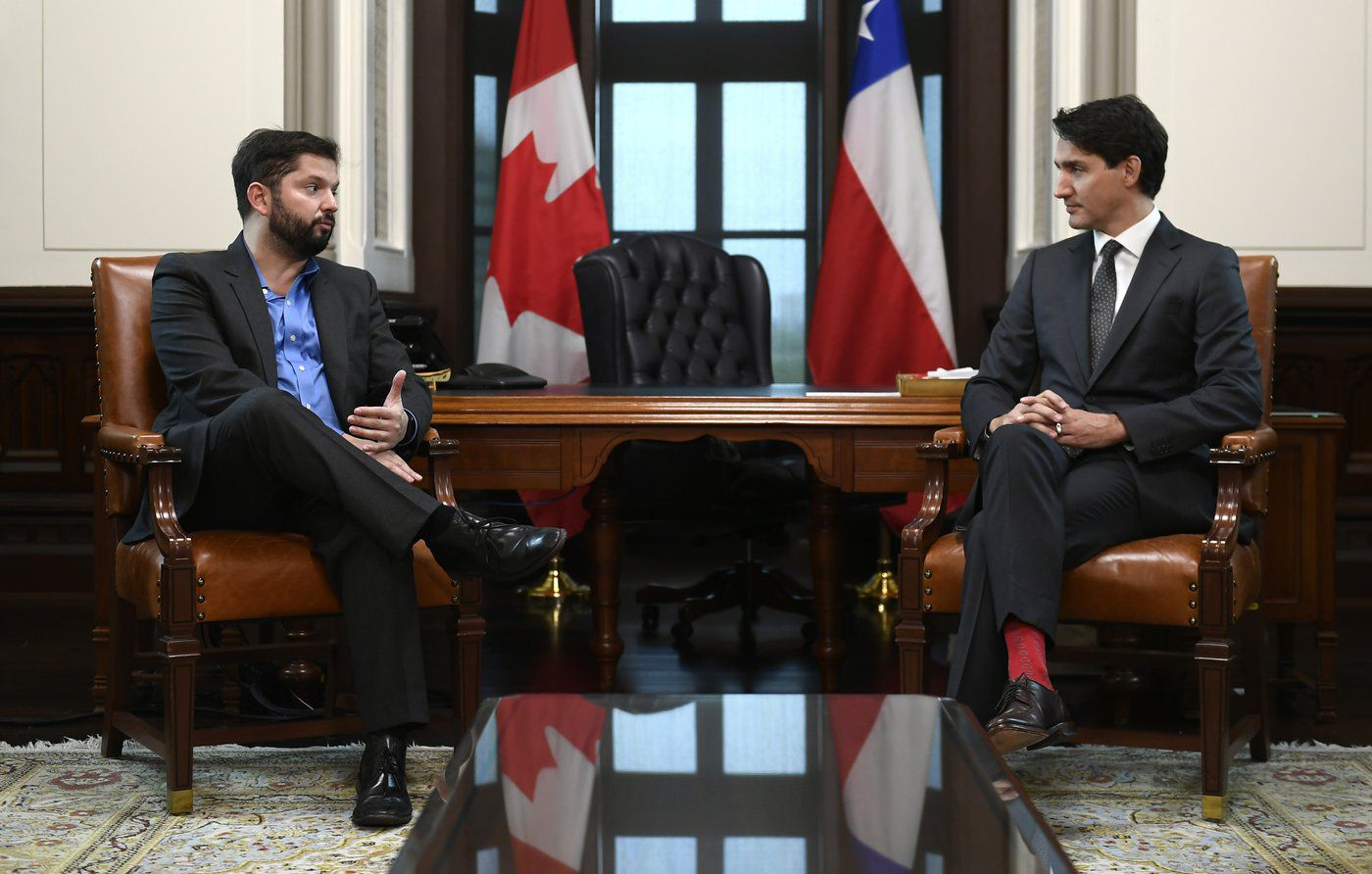 Prime Minister Justin Trudeau meets with President of the Republic of Chile Gabriel Boric in his West Block office on Parliament Hill in Ottawa, on Monday, June 6, 2022. Photo by The Canadian Press/Justin Tang
Previous story
Next story

The world is changing and all governments must fight the climate crisis and ensure economic development benefits everyone, including Indigenous Peoples, Canada's prime minister said Monday as Chile pushes ahead with reforms to its mining sector.

"You cannot grow a strong, resilient economy in the 21st century unless you are also protecting the environment, unless everyone has a chance to participate, unless you are including people who have been excluded," Prime Minister Justin Trudeau said as he appeared alongside Chilean President Gabriel Boric during his visit to Ottawa.

Asked by a Spanish-speaking reporter how the mining reforms impacted Canada's view of Chile as a place for investment, Trudeau declined to comment on the specific democratic processes underway in the country.

But he said leaders and democracies must make sure they keep up with changes in the world, not just for moral reasons but also practical ones.

"That's the only way to build a strong future and a strong country."

Boric, who became the youngest president in the history of Chile when he was inaugurated in March, is a left-leaning former student activist who had campaigned for greater environmental protections in a country famed for its enormous copper mines.

The two leaders answered local high school students' questions on Monday afternoon at the Museum of Nature in Ottawa.

Asked about Canadian mining companies that operated in Chile under more lax regulations in the past, Boric said some companies destroyed territory and generated massive revenues without giving enough back to the country, and some of those companies were Canadian.

"The way that we can change our development goals is convincing and forcing the private sector to work better," he said.

Boric also said he told Trudeau that Chile wants to force Canadian companies to act the same way in his country as they would on home soil, saying "there's no reason to justify that in some countries you behave in some way you wouldn't in your own country."

Trudeau said the two leaders discussed the issue during a wide-ranging bilateral meeting. He said he believes the vast majority of Canadian mining companies are responsible, but acknowledged "there are some that are not, and we have to be tougher against them."

Chile is currently undergoing reforms to its 1980 constitution, which stems from when the dictator Gen. Augusto Pinochet was in power. The draft will be put to voters in September.

Last month, the assembly working on the draft approved a proposal to include a section that would require mining companies to set aside resources to address harms caused by mining activities, although it rejected plans to nationalize parts of the industry.

The assembly also greenlit a ban on mining in glaciers, areas that are vital to protecting water supplies and other protected regions.

Catherine Coumans, a research coordinator with MiningWatch Canada, said she hopes reforms in Chile will also ensure mining companies have to obtain informed consent from Indigenous peoples in that country as well.

"Trudeau needs to get Canada's house in order by implementing human rights due diligence legislation ... that will require Canadian companies to respect human rights in their operations overseas and offer those harmed access to Canadian courts to get access to remedy," she said in an email.

He said he wants to introduce legislation of his own that would prohibit gun ownership by all.

The goal of Chile's government is to eliminate firearms from criminal groups, and it does not want firearms to be within civil society, Boric said in Spanish.

It is not enough to have regulations inside of a country, but international regulations are also needed to stop the cross-border flow of guns, he added.

Trudeau also said Canada and Chile have committed to co-sponsoring the Americas for the Protection of the Ocean Declaration, which aims to protect the Pacific Ocean.

"Canada and Chile are both ocean countries," he said.

"We know healthy oceans are critical for jobs for communities and for fighting climate change. Today's announcement is about how we keep the Pacific Ocean healthy from protecting migratory routes for sea animals to preserving delicate coastal ecosystems," he said.

Today, we welcomed President @GabrielBoric to Canada – and immediately got down to work. We spoke about how we can create jobs, strengthen trade, and help Canadian and Chilean businesses and entrepreneurs access new markets and reach new customers. pic.twitter.com/uFffxPRF67

Canada and Chile also signed an agreement to advance gender equality and women's empowerment in both countries. Gender Equality Minister Marci Ien said the agreement seeks to set up a framework for the two governments to co-operate on public policies to promote women's empowerment.

She said both countries plan to support each other’s goals to remove socio-economic, cultural and institutional barriers that prevent women from participating in the economy and public life.

Trudeau said Canada and Chile have had a long-standing, positive relationship, and at a time when authoritarian states are rising and democracies are backsliding, it's important to welcome a "strong, progressive voice" on the world stage.

This report by The Canadian Press was first published June 6, 2022.