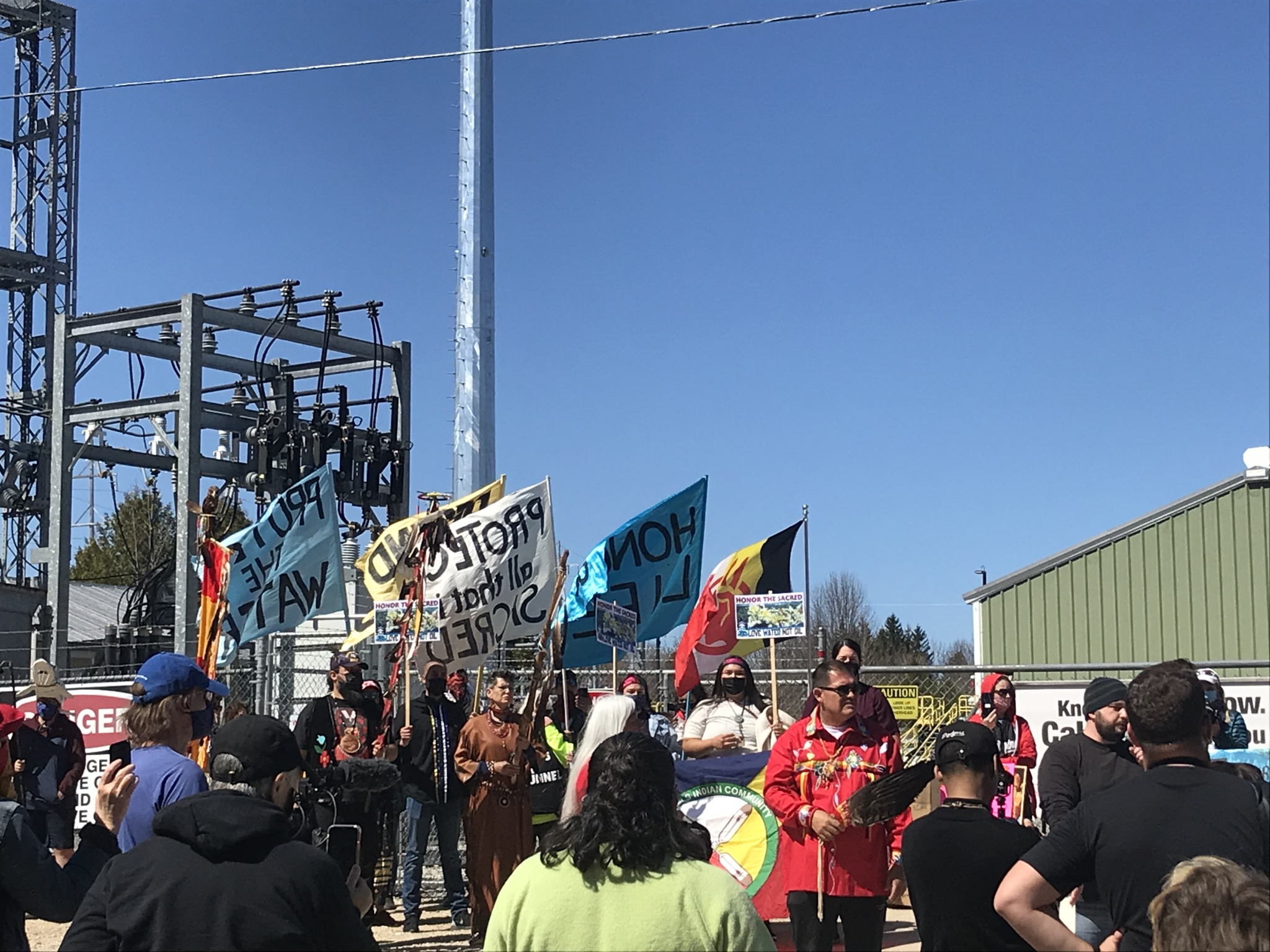 No amount of philanthropy or high-priced PR campaigns can hide the truth that Canadian oil company Enbridge is destroying our clean air and water. This corporation continues to operate its dangerous Line 5 pipeline in direct violation of the first-ever shutdown order for an existing pipeline. Each day Enbridge continues to operate Line 5, it poses a threat to one-fifth of the world’s fresh water.

Company lobbyists have used money, influence and personal connections to silence organizing efforts to get Line 5 out of the Great Lakes.

A watchdog group revealed in 2019 that Enbridge bought $63,000 in paid sponsorships and ads with the Michigan Association of Counties, which consequently supported a resolution backing the pipeline. The association also called Enbridge a “partner” during its annual conference and ran misleading newspaper ads saying they are “working to protect Michigan's Water.”

Bridge Magazine and the Michigan Campaign Finance Network also analyzed over 5,700 documents — including public disclosures and internal emails obtained through the Freedom of Information Act — revealing former Michigan governor Rick Snyder “allowed lobbyists and officials with a direct relationship to Enbridge to offer extensive input about the fate of the pipeline,” such as whether Enbridge should invest in its crumbling infrastructure rather than cease operations entirely.

It’s clear that decisions about Line 5 are not made in a vacuum. They have been heavily influenced by external lobbying efforts.

Enbridge-owned pipelines have leaked more than 7.5 million gallons of oil into the environment since 1999, which equates to an average of 500,000 gallons of oil per year. Public relations campaigns do not change these facts. No PR campaign will help the millions of people who are dying from air pollution and climate catastrophes worldwide. Enbridge’s continued lobbying efforts to stall climate action cannot hide the fact that nearly half the world’s population is now at risk of severe climate impacts due to the egregious actions of the fossil fuel industry.

Oil spills cause a host of short- and long-term health effects. After a spill, chemical reactions and fumes contaminate our water and air, which can cause memory loss, lung problems and chest pain, among many other health-related issues. A United Nations report found that refinery workers are at a higher risk of skin cancer, prostate cancer, lung cancer and leukemia.

The local impacts of an oil spill are equally unnerving. The National Wildlife Federation has described Line 5 as “the time bomb in the heart of the Great Lakes” because of how likely it is to leak and the amount of irreparable damage it will cause. Beyond severe ecological devastation, Line 5 threatens local Indigenous communities’ water supply, medicinal plant species and treaty rights that recognize their role in managing hunting, fishing and gathering in ceded territories.

Line 5 also does not benefit Great Lakes states’ economies, nor does it significantly influence their energy supply. Ninety-five per cent of its product that flows through Great Lakes states goes to Sarnia, Ont., and much of that continues flowing via the Line 9 pipeline to Montreal refineries. Enbridge is threatening Indigenous communities and ecosystems in the United States to shortcut oil through that country to Canada.

Furthermore, Enbridge has failed to disclose to regulators information about the size of coating gaps and committed easement violations in the past.

While talking a lot about truth and reconciliation, the reality is that Canadian political leaders, and our government as a whole, will gladly disrespect and disregard Indigenous rights and voices when the fossil fuel industry tells them to. Canadians operate on the mistaken belief that we are moral leaders on climate action on the international stage, yet when resistance to a pipeline is successful south of the border, our leaders intervene on behalf of oil lobbyists attempting to stall climate action.

But the lobbyists working on behalf of Enbridge, and the politicians who have been so completely captured by the fossil fuel industry, do not speak for Canadians. The recent ban on oil and gas development in Quebec, opposition to new offshore oil projects like Bay du Nord and Canadians’ desire for climate action in the face of increasing severe weather events all point to a simple fact: Oil lobbyists and government representatives are misleading American politicians and the public about Canadians’ support for the dangerous oil projects and are painting a false picture of unanimous backing here for Line 5.

We have a duty as Canadians to force our government to stop representing the interests of this dying industry abroad and to respect Indigenous rights. This pipeline should have been shut down, and the only things standing in the way of climate action are our Canadian leaders.

Canada has a falsely earned reputation in the international community as a leader in the energy transition and in addressing the climate crisis. In this instance, the U.S. is putting Canada to shame. In 2018, American activists in the Oil and Water Don’t Mix Coalition successfully won a shutdown order from Michigan Gov. Gretchen Whitmer to cease all Line 5 operations, using canvassing and field tactics. While this was a huge win, Enbridge is operating in defiance of this mandate.

The company continues to attempt to deceptively persuade the world that it cares about human health with pricey PR campaigns. While Enbridge seeks some positive press, no one should ever forget the harm it continues to impose with its pipeline projects.

Conor Curtis is a social and environmental researcher and writer from Corner Brook, N.L. They have written on topics ranging from international politics and global inequality to hydraulic fracturing and climate change. They have also worked and volunteered in a number of roles, ranging from managing community services at a food bank to organizing refugee settlement support. Conor is currently digital communications co-ordinator for the Sierra Club Canada Foundation.

Kathleen Brosemer (Azhede-kwe) is the environmental director for the Sault Ste. Marie Tribe of Chippewa Indians. A PhD candidate in energy and environmental policy, Brosemer has carried out the direction of the tribe’s board of directors in opposing the continued operation of Enbridge’s Line 5 since 2014. Her dissertation (in preparation) is titled Energy Justice for the Anishnabek.

Tessine Murji is a conservation organizer with the Illinois Sierra Club based in Chicago but is originally from Montreal. She manages the chapter's federal lobby team to make sure the Illinois delegation is consistently hearing from volunteers on Sierra Club priorities and that elected officials are living up to their endorsements. She also runs the Chicago group's field team, where volunteers meet once a month with partner organizations to learn about and take action on some of Chicago's most pressing campaigns to protect people and the planet.

By Jena Brooker | News, US News, Energy | July 8th 2021
Reports from the Race to a Safer World

So, when an ordinary average

So, when an ordinary average person gets told by the government, in the person of say a police officer, to stop doing some activity which the government had determined they don't want people doing (ie it is against the law), and then that person refuses to stop doing it, the cop generally grabs them and arrests them. Usually there's a period of time lying on the ground on one's face in handcuffss. If the person has darker skin or is an environmentalist, probably there'll be some roughing up in that process; in the US, if they're black they might get shot. Then they'll get charged with doing whatever they were doing, and maybe go to jail.

So, all I'm saying is, why aren't we seeing any Enbridge execs face down on the floor in handcuffs, maybe getting beat up?

(It's a rhetorical question, I know the answer, I'm just noting that IF the system was consistent, IF it involved equal treatment under the law to rich and poor, establishment and stigmatized, THEN that kind of stuff would be happening. Quite often.)