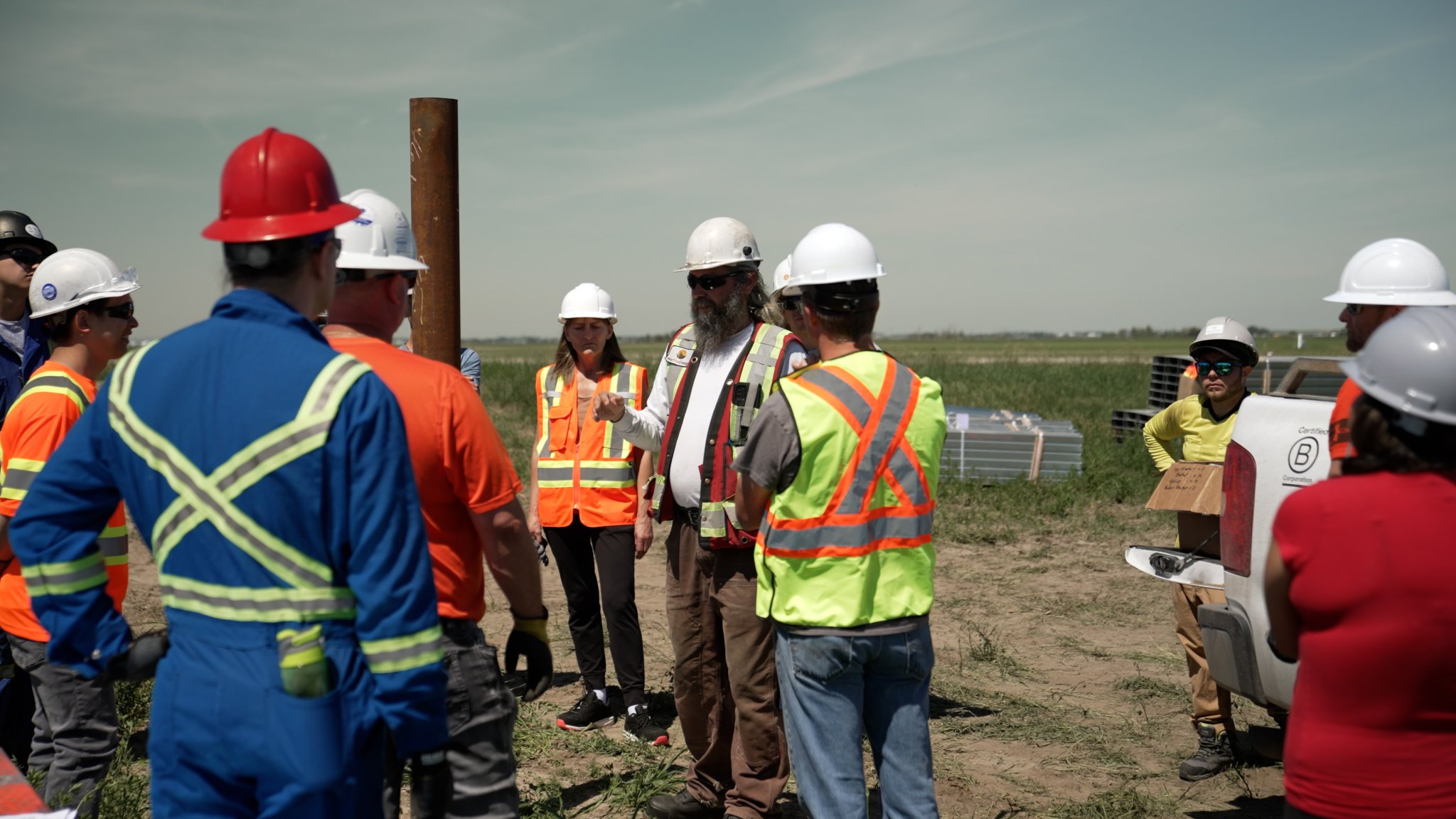 Known for its steady, corn-producing sunshine, Taber, Alta., will soon be home to two operating solar energy sites that started out as abandoned oil and gas wells.

The RenuWell project — which aims to transform and repurpose inactive oil and gas well sites into solar energy sites — has been in the works for years, but after securing $2.1 million funding from Alberta Innovates and the Municipal Climate Change Action Centre, it is officially underway.

By October, the sites are expected to produce enough electricity to power 280 Alberta households or irrigate 11,700 acres of farmland at 2,030 MWh for an average year.

An abandoned well, often referred to as an orphan well, is one that has no viable oil and gas company to do the decommissioning and reclamation work needed after the well is no longer being used. Environmentally, they’re a significant source of methane pollution — a greenhouse gas found to be 80 times more powerful than carbon dioxide for driving global heating.

“These [abandoned oil and gas well] sites are not coming back to the productivity level, either for agriculture or for the environment, that they were initially,” said Keith Hirsche, president of RenuWell Energy Solutions and the originator of the RenuWell project, in an interview with Canada’s National Observer.

“So, from that perspective, I think it makes sense to reuse disturbed land for energy generation, rather than disturb additional land that’s productive in other capacities, currently.” The solar projects are a step toward creating more renewable energy training and job opportunities, saving on costs to remove existing oil infrastructure like roads and powerlines and reaching Alberta’s 2030 goal of having 30 per cent of its energy coming from renewable sources.

The training program is a rapid course that teaches industry professionals about the basics of solar and translates existing knowledge and skill sets so they can be used for clean energy, said Iron & Earth executive director Luisa Da Silva.

Iron & Earth, which is one of eight project partners, is an organization that aims to empower fossil fuel industry and Indigenous workers to build and implement climate solutions for an environmentally and socially prosperous planet.

“There’s a lot of misinformation, but actually, the [renewable energy] sector is growing. There’s a lot of opportunity right now... Companies are having a hard time finding the skilled workers to fulfil those positions, though,” said Da Silva.

Hirsche and RenuWell’s partners want to expand the project’s reach to a more commercial level, but Hirsche said they’re restricted by existing energy regulations and difficulties with grid interconnection, not funding.

In Alberta, abandoned wells are the Orphan Well Association’s (OWA) responsibility to clean up.

And while converting them to solar is one way to repurpose existing infrastructure, OWA president Lars DePauw said those projects are hindered by the lack of solar energy regulations.

“It’s not as simple as, ‘It’s an oil and gas site. Now, it’s a solar site and the problem is solved.’ It’s the same thing with a lot of other unique ideas that people are looking at, like geothermal for example.

“It’s a good idea, lots of interesting potential,” DePauw said. But there are regulatory issues such as site closure requirements to work out before converting orphaned wells to clean energy production sites becomes commonplace, he said.

“We’re kind of at the end of these current insolvencies, and we don’t really foresee a lot of new ones coming in. It’s more of a component of us dealing with the sites that are currently designated as orphans,” says DePauw.

Renewables-sceptics are fond of throwing big numbers around, not realizing what big numbers the fossil industry already represents. Somebody threw at me that it would take 40,000 wind turbines to run Alberta, how could we do that? I blandly replied that Alberta somehow drilled 80,000 oil wells, and they cost a million or so apiece, I think we can do something that big again.

1) What does "reclaimed" mean

1) What does "reclaimed" mean, I wonder. Does that mean someone's planning on using them again? Or just that they're capped but no new use ready to start??

2) And then there's Ontario ... which doesn't even know where its abandonned oil wells are, or anything else much about them ... except that some of 'em are probably hazardous to people living in the area.

It means reclaimed from being

It means reclaimed from being gas wells, where the land can be farmed again. It's not like a mine where the soil is ruined. Everything more than a few metres from the wellhead is still just dirt.

There is so much information

There is so much information being withheld from the public about these "abandoned/orphan sites/inactive/reclaimed/being decommissioned and I'm sure there are more levels of ambiguity and vagueness - all to identify the fact that the Oil Conglomerates who exploited the site, abandoned their exploitation as the site stopped producing. The oil company did not clean up its site and close it, it merely abandoned it and left without fulfilling its obligation to clean-up upon closure - Oh but wait... Was there such an obligation in their original forage contract and land grant from our Government? What exactly are the regulatory issues being now referred to when one is attempting to "patch up" the damaged caused by these pillagers of natural resources for their shareholder gain - and to add insult to injury while being sponsored by our taxes and protected from any and all responsibility by our Governments. There is soooo much we don't know and it is so complex that even trying to clean it up with this type of initiative becomes ackward and complicated and runs into "REGULATORY" material I'll restrain from naming. Can't believe I thought I was making a difference by voting throughout my long life here in Canada.