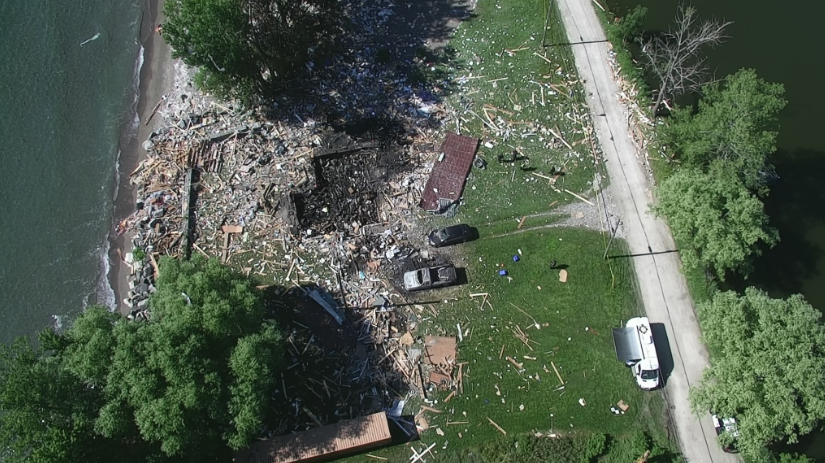 The explosion threw furniture dozens of metres onto the beach and into Lake Erie, blew curtains and tablecloths up onto powerlines, mattresses and cinder blocks out onto the road. It left behind virtually nothing of the home it decimated.

Marian Hughes was on the phone on a warm Sunday afternoon when it happened.

“It was very loud. We felt it in our chests, we felt it in our bodies,” says Hughes, who lives on an idyllic strip of land just north of Point Pelee National Park on Lake Erie.

Thinking a boat had exploded, Hughes rushed to the lake. There was nothing there. But to the south along Marentette Beach Road, she saw a “mushroom cloud” of black smoke.

Hughes’ husband rushed down the road toward the plume. When he came back, he told her, “It’s all gone.”

The explosion on July 12, 2020, killed two people and their dogs in their beachfront home south of Leamington in southwest Ontario. Dave and Dianne Nadalin had retired from careers in health care and moved to the beach about five years earlier. They were parents, grandparents and great-grandparents, friendly and well-liked in the community.

An investigation by Ontario’s Office of the Fire Marshal into the cause of the blast was inconclusive. It could have been a natural gas or propane leak from an appliance or tank in the house. Or, it could have been a buildup of natural gas from a long-abandoned well. (That’s what likely happened the following summer when a blast levelled part of downtown Wheatley, 15 kilometres away, and injured 20 people.)

For years on Marentette Beach, residents noticed a distinctive smell that they suspected was hydrogen sulphide leaking from an old well. Maps of known wells show several in the area — with one right at the Nadalins’ property.

The fire marshal began its investigation a day after the Marentette Beach blast, a spokesperson told Canada’s National Observer. “In the end, the cause of the explosion could not be determined due to the level of destruction,” Sean Driscoll wrote in an email. “While natural gas from an underground source was considered by fire protection engineers, it could not be confirmed nor eliminated as the cause or source.”

Southwestern Ontario is home to an estimated 27,000 oil and gas wells, mostly inactive, the remnants of a petroleum boom more than a century ago. Over the decades, the wells have been buried, forgotten, lost. Occasionally, though, they bubble to the surface, releasing substances through corroded seals that threaten the environment and, in some instances, people’s health and safety. Old wells can leak hydrogen sulphide, which, at low concentrations, smells bad. At higher concentrations, it can cause illness and death. Methane can also build up and explode.

The explosion, on July 12, 2020, killed two people and their dogs in their beachfront home south of Leamington in southwest Ontario.

The Ontario Petroleum Institute estimates 4,400 abandoned wells “pose a risk to landowners and public health and safety” but thus far, the province has been excluded from a federal program that allocates funding to clean up orphaned wells in Alberta, B.C. and Saskatchewan. In Ontario, most of the wells are on private property and deemed the responsibility of individual landowners. But with costs to plug a leaking well ranging from about $60,000 to well into the millions, many private citizens can’t afford to deal with them — and argue it shouldn’t be their responsibility.

A provincial Abandoned Works Program provides some support to plug the most high-risk wells, but with an annual budget of between $1 million and $3 million, it has only dealt with 380 wells over its 17-year existence.

Michèle Allaire bought her dream property on Marentette Beach at the end of the summer of 2020. When viewing it, she saw the pile of rubble that was the Nadalins’ home — but she didn’t know it was from an explosion. It was only when she moved in that she heard from neighbours what had happened and that there were abandoned wells in the area.

“I was just shaking,” says Allaire. “I was really scared. I wanted to sell it back, just because of the not knowing. Like, where do you start to protect yourself when you don’t know?”

She began digging into the situation, trying to figure out what had happened, trying to ensure it wouldn’t happen at her place. She didn’t invite people over, afraid for their safety. She had a slew of experts come in to inspect the furnace and the septic tank and remove the propane tank. “I wouldn’t even light up a candle because just a little spark could explode [if methane had built up],” says Allaire. She installed gas monitors to measure potential fumes in her home. She estimates she spent about $10,000 on all the measures.

The Nadalins’ family declined to comment, but in earlier media interviews said they’d hired a lawyer to try to find answers to what happened.

“It’s basically the unknown,” says Allaire. “The unknown is so scary.”