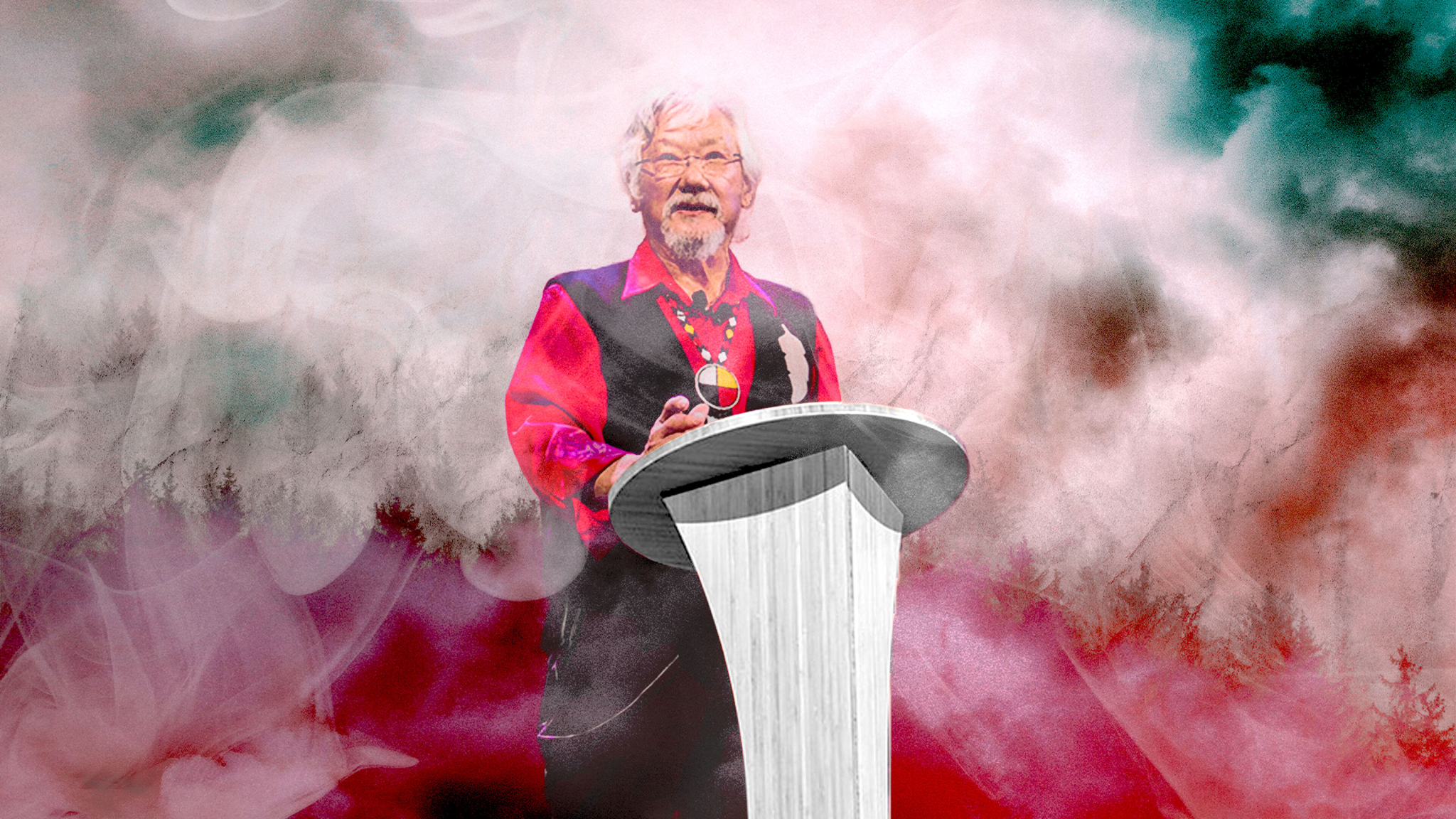 David Suzuki was waiting for a seaplane flight from Vancouver’s waterfront Friday when he noticed a press conference outside the small airport. Federal Tourism Minister Randy Boissonnault, the MP for Edmonton Centre, was there to announce almost $1.2 million in federal funding to bolster tourism in British Columbia, so Suzuki walked over to listen.

What the 86-year-old environmentalist heard didn’t sit well with him.

At one point, Boissonnault gestured toward the North Shore Mountains across the water, shrouded in wildfire smoke, and remarked, “If a picture’s worth a thousand words, the view today’s a million.”

These words, which appeared to ignore the grave evidence of the climate emergency all around them, frustrated Suzuki. When a staffer opened the microphone to questions, Suzuki stepped up.

“All this bullshit about how you’re trying to encourage the coming together to this beautiful land, what are we doing about this land?” he asked. “We’re not doing the right things to ensure tourism into the future.

“Look at the smoke, that’s the new reality,” he continued. “You talk about tourism? What are they going to have to come here in British Columbia if we’re not dealing with the major issues that confront us? The loss of biodiversity, old-growth forests being cut down and climate change from the use of fossil fuel.”

Even though he used just one expletive, Suzuki’s words were reported by CTV News Vancouver as a “profanity-laden rant.” This framing provided fodder for climate denialists and right-wing media pundits, who jumped on the opportunity to accuse Suzuki of hypocrisy and aggression. Meanwhile, climate justice organizers applauded Suzuki for his candour, and NDP MP Charlie Angus tweeted his support. But media treatment of the event skirted the main issues behind Suzuki’s words.

Speaking on the phone from his home in Vancouver on Tuesday evening, Suzuki called the conference a “hilarious presentation.” “Here was the minister of tourism coming to say that everyone is going to want to come to B.C. because of its great beauty,” said Suzuki. “When he was standing there, you couldn’t see the mountains behind him because of the smoke. The more he spoke, the madder I got.”

Suzuki explained pumping money into tourism while neglecting to take strong actions on the climate crisis is irresponsible. “If you’re serious about tourism in the future, you should be scared shitless about climate change because we’re in a drought right now,” Suzuki said.

He recalled that in August 2020, popular tourist destination Tofino placed restrictions on water usage during a similar drought that echoed the town’s 2006 water shortage, and noted Haida Gwaii is currently suffering from a loss of water due to insufficient rainfall. B.C.’s Sunshine Coast community declared a state of emergency over the drought on Monday. These rank alongside other extreme weather catastrophes in the province, like the heat dome, infrastructure-destroying floods and wildfires that razed towns to the ground as evidence the climate crisis is a drastic threat to British Columbia.

“I mean, goddammit, what’s it gonna take? If a tourism guy thinks he’s helping the tourist industry and he’s not saying, ‘Our government is working hard on climate change,’ then they’re not serious,” said Suzuki, who wasn’t surprised Boissonnault ignored his questions and comments. “They’re just not used to anybody getting up and blasting them like that.”

Suzuki said treating climate change as a strictly political issue that requires decorum is a barrier to necessary action. “[Politicians] and the media have a hard time dealing with someone who really is passionate about what they’re doing,” said Suzuki, praising Greta Thunberg’s forceful calls for climate action. He recalled a national radio host telling him that environmentalists were “too emotional.”

“Well, goddammit, the planet is under severe attack. The emotional response is the important thing,” said Suzuki. “If your mother was dying, and you went, ‘Well, she’s gonna die. Oh, well,’ you’d be saying, ‘What the hell’s wrong with this guy? Doesn’t he show any emotion for his mother?’ We’re talking about Mother Earth, for Christ’s sake.

“Talk about a new tax, and business guys will get emotional then, but that’s OK, I guess,” he added.

Suzuki encouraged others to seize opportunities to call out people in power for lack of climate action. “If there’s ever some announcement by some minister or whatever, people who are concerned about climate should jump up and really nail them,” said Suzuki.

“It’s just bullshit, it’s just words, and they’re not taking it seriously. They make an announcement in Kingston or in Halifax, people there ought to jump in. Don’t let these guys get away with this.”

Ironic that Suzuki was there

Ironic that Suzuki was there to board a flight, no?

Nit-picking remarks like this are part of the problem!!

Sorry! This was meant for

Sorry! This was meant for Mike's comment about Suzuki boarding a plane!!

Actually NO!!! Seaplanes happen to be one of the only ways to get from Vancouver to Haida Gwaii, the other being by car and ferry. Do you expect an 86-year-old elder to row his way across the Great Bear Sea?!!

O K There's something wrong with this comments section! This reply was again meant for Mike's comment!

Penny, you need to check the

Penny, you need to check the indentation of the comments to see what is a preceding post and what is a reply. It's not perfect but it's what we have to work with.

Mike is right. Suzuki was

Mike is right. Suzuki was there to board a flight ....... using a now in-service ELECTRIC seaplane fleet run by Harbour Air. Location: Vancouver Harbour below Jack Poole Plaza where the news conference took place.

This line of finger-pointing,

This line of finger-pointing, while popular with some, is without merit. It's the same complaint heard when people use energy (e.g. gasoline) to drive somewhere to attend, oh, say, university to take a degree in environmental science.

Find a new line of complaint.

Suzuki is right, Tourists are

Suzuki is right, Tourists are not going to continue to come to BC or Alberta because of the increased number of forest fires. The four seasons are now fall, winter, spring and fire season. A new report shows that the forest industry is generating comparable amounts of green house gases as the oil and gas industry. Things need to change and change quickly.

Good for David Suzuki. I

Good for David Suzuki. I agree we need to start calling out these moron politicians. They're an insult to our intelligence. One only has to look around to see that we're destroying life on the planet to make a greasy buck.
And of course main stream media makes a big deal of saying bullshit. I call bullshit on them every time I lower myself to even glance at their pathetic biased, half truth news.

Good for David Suzuki. I

Good for David Suzuki. I agree we need to start calling out these moron politicians. They're an insult to our intelligence. One only has to look around to see that we're destroying life on the planet to make a greasy buck.
And of course main stream media makes a big deal of saying bullshit. I call bullshit on them every time I lower myself to even glance at their pathetic biased, half truth news.

Good for Suzuki. We all

Good for Suzuki. We all should be doing things like he did.