By John Woodside & Natasha Bulowski | News | November 10th 2022
#13 of 13 articles from the Special Report: The Influencers 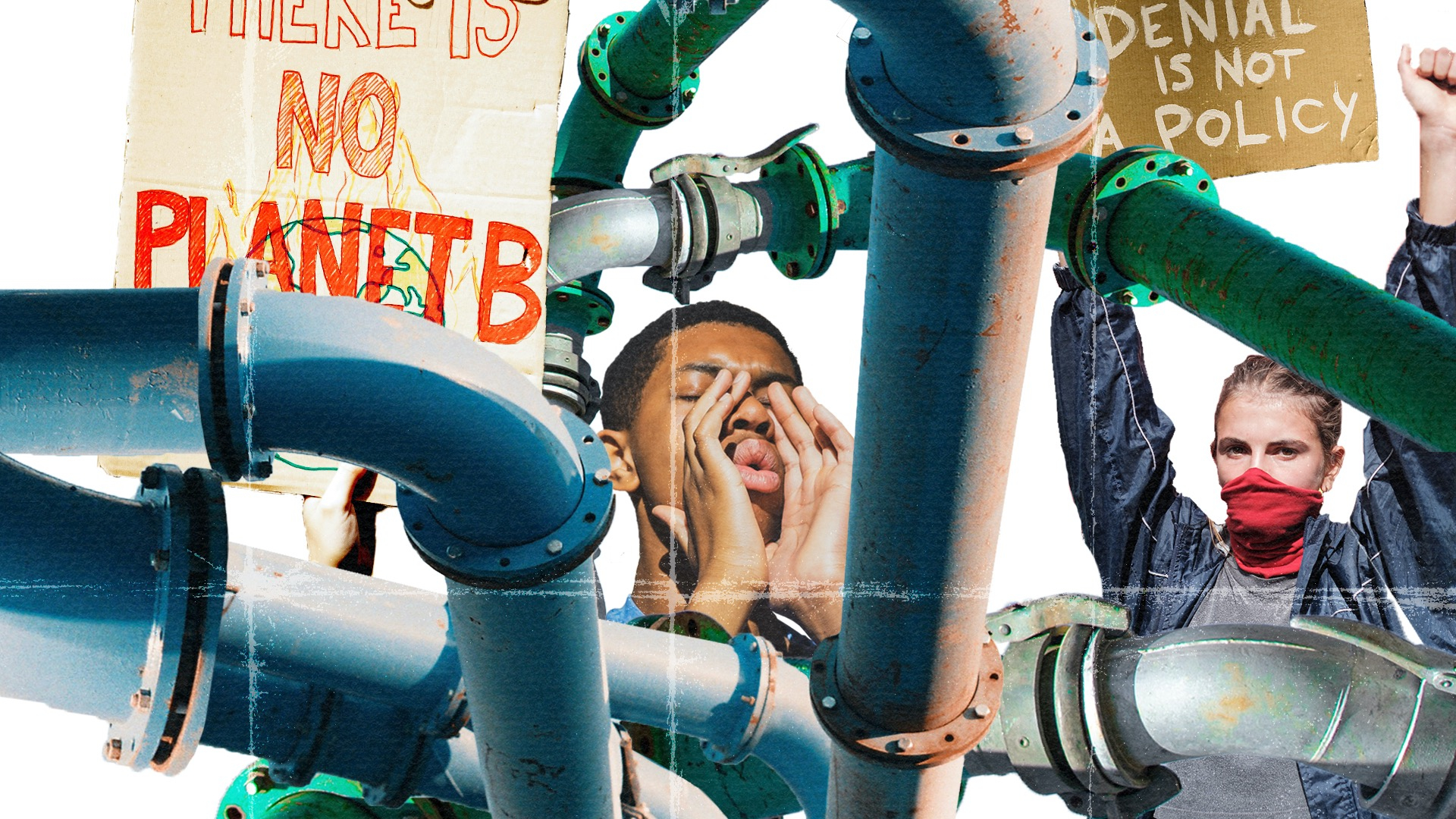 Hundreds of fossil fuel lobbyists including at least a dozen from Canada are in Sharm El-Sheikh, Egypt for this year’s United Nations’ climate conference, a data analysis from Corporate Accountability, Corporate Europe Observatory and Global Witness reveals.

Using the UN’s provisional list of participants that shows registered attendees at the start of COP27, the groups identified at least 636 fossil fuel lobbyists, representing a 25 per cent increase from COP26. These climate negotiations are frequently criticized for having the industry most responsible for the climate crisis present in significant numbers.

“Tobacco lobbyists wouldn’t be welcome at health conferences, arms dealers can’t promote their trade at peace conventions. Those perpetuating the world's fossil fuel addiction should not be allowed through the doors of a climate conference,” said Pascoe Sabido, a campaigner with Corporate Europe Observatory, in a statement. “It’s time governments got out of the pockets of polluters, come to their senses and help make COP27 the success the world vitally needs it to be.”

Other than the United Arab Emirates, which brought a whopping 1,070 delegates to COP27, the 636 fossil fuel lobbyists, if grouped under a single country, would be the largest delegation according to the analysis. Moreover, there are more fossil lobbyists than representatives from the ten most vulnerable countries to climate change, according to GermanWatch.

This raises serious questions about climate justice according to the groups who tallied the numbers. Activists in the Global South, Indigenous communities, and others who are disproportionately impacted have been effectively “shut out of the talks by high costs, visa challenges, and repressive actions by the hosting country,” the groups said in a statement.

Canada is one of 29 countries that included fossil fuel lobbyists in its delegation, according to the analysis. Enbridge has three registered participants, Capital Power has two, and ATCO, Parkland and Delta Clean Teach (a carbon capture focused firm) each have one.

Not in Canada’s official delegation, but still present at COP27, is the Canadian Association of Petroleum Producers (CAPP) which sent three people including its CEO Lisa Baiton. CAPP is the country’s top oil and gas lobbyist, advocating for the continued growth and expansion of the oilsands. It is not known how many other fossil fuel linked participants are here, but there are more. Earlier this week Canada’s National Observer identified Suncor sustainability vice-president Jon Mitchell at the Canada pavilion chatting with RBC senior-vice president John Stackhouse. Stackhouse is on the registered participant list, but Mitchell isn’t.

Canada “is an open democratic society, all voices can be heard, and we can't start censuring certain voices because they contribute to climate change. If that was the case then we wouldn't be able to invite any companies here,” said Environment and Climate Change Minister Steven Guilbeault. “Equally, I think in a democratic society like ours it's fine for environmental groups to say well we disagree with the message that they're bringing and we want to have our voices heard.”

Moreover, Guilbeault says it's important to make a distinction between the positions fossil fuel lobbyists have, and what the government is doing.

“Tobacco lobbyists wouldn’t be welcome at health conferences, arms dealers can’t promote their trade at peace conventions. Those perpetuating the world's fossil fuel addiction should not be allowed through the doors of a climate conference,” #COP72

“They can lobby, but it's not working,” he said. “We're tackling the emissions of the oil and gas sector in Canada, and we will continue to do so.”

On Friday, the Canada pavilion is hosting the Pathways Alliance – the oilsands majors Suncor, Cenovus, Canadian Natural Resources, ConocoPhillips, MEG Energy and Imperial who’ve pledged net-zero by 2050 – for a presentation on the group’s massive carbon capture plans they want government to largely pay for.

Environmental groups are pressuring Canada to drop the event, saying it undermines Canada’s reputation at a conference designed to drive global emissions to zero. The oilsands companies are only planning to make their oil extraction more efficient as they increase production. There are no plans to cut production at a pace consistent with what climate science demands is necessary to prevent disastrous global heating. Fossil fuels when burned still release harmful emissions that make the planet sweat.

“Industries aligned with climate action are welcomed in event programming, and there are many of these companies present at COP27,” an open letter signed by dozens of environmental groups reads. “However, oil and gas companies, like those active within the Pathways Alliance, have been the biggest obstacle to climate action — both at COP and back in Canada, and for decades now have made their fortunes while millions around the world suffer the tragedies of climate impacts.”

“There's a price of admission to say net-zero; you're either part of the solution or part of the problem,” she said.

Beyond CAPP, other Canadian trade groups present at COP27 include the Canadian Nuclear Association, with 10 registered participants including president and CEO John Gorman and two participants each from Electricity Canada and the Canadian Hydrogen and Fuel Cell Association, one of which is a Parkland lobbyist. Christopher Keefer, a prolific nuclear lobbyist and president of Canadians for Nuclear Energy is a registered participant. At last year’s climate conference in Glasgow, Scotland, Keefer tried to grill Guilbeault about the anti-nuclear stance the minister held before entering politics.

Only two speakers at the Pathways Alliance event on Nov. 11 are listed as registered participants. Those not listed include Mark Cameron, Pathways Alliance vice president of external relations and Cenovus’ chief sustainability officer Rhona DelFrari.

All but one member of the Pathways Alliance pay membership dues to CAPP. Those dues helped pay for an industry front group to run ads urging Canadians to oppose a federal emissions cap on the oil and gas sector, Canada’s National Observer reported in September.

“COPs are not only a space where crucial international policy is decided, they are also a microcosm of the world, so, it’s unsurprising to see this dynamic of continuous delay, dilution and deception play out here as well,” said Caroline Brouillette, national policy director of Climate Action Network Canada. On Nov. 10, Canada’s Competition Bureau announced it will investigate whether the Canadian Gas Association’s claim that natural gas is “clean” is greenwashing.

Despite the predictable tactics employed by the fossil fuel industry, Brouillette says it is “infuriating … that the UNFCCC and its signatory parties — including Canada — are not doing more to kick out the polluters who have had overpowering influence in blocking climate action for decades.

Make no mistake: underneath their greenwashing tactics, fossil fuel companies are here to justify continued production and expansion of fossil fuels, and that mission is fundamentally incompatible with a climate-safe future.”

Guilbeault: "...we can't start censuring certain voices because they contribute to climate change"

Can we censure Big Oil for ignoring the best available science?
The IPCC warns that the world must nearly halve GHG emissions by 2030 and eliminate them by 2050 to keep warming below the danger limit of 1.5 C.
IEA's Net-Zero by 2050 report says no new investment in fossil fuels after 2021 to limit global warming to 1.5 C.

Can we censure the industry for its non-stop duplicity?

"Oil Executives Privately Contradicted Public Statements on Climate, Files Show" (NYT, Sept. 14, 2022)
"The documents, subpoenaed in a House investigation of climate disinformation, show company leaders contravening industry commitments.
"A Shell station in Houston. An internal email in 2020 said the company's announcement of a pathway to net zero emissions had 'nothing to do with' its business plans.
"Documents obtained by Congressional investigators show that oil industry executives privately downplayed their companies' own public messages about efforts to reduce greenhouse gas emissions and weakened industry-wide commitments to push for climate policies."
"At Royal Dutch Shell, an October 2020 email sent by an employee, discussing talking points for Shell's president for the U.S., said that the company's announcement of a pathway to 'net zero' emissions — the point at which the world would no longer be pumping planet-warming gases into the atmosphere — 'has nothing to do with our business plans.'"

Of course, if we stop FF companies from crashing climate conferences, for the same reasons many politicians would also have to stay home.
Or Minister Guilbeault would have to clean up his act.

"'Guilbeault says it's important to make a distinction between the positions fossil fuel lobbyists have, and what the government is doing.
"'They can lobby, but it's not working. We're tackling the emissions of the oil and gas sector in Canada, and we will continue to do so.'"

Of course, fossil fuel lobbying works. Why else would CAPP put so much effort into it? Why else would CAPP exist?
How else does Guilbeault explain his government's purchase of the Trans Mtn pipeline and construction of its expansion? Baie du Nord offshore oil project? LNG projects and pipelines (Coastal GasLink)?
How else does Guilbeault explain that large O&G emitters are shielded from effective carbon pricing?

Govt and industry are betting big (tens of billions of our tax dollars) on three white elephants (SMRs, LNG, CCS) that cause high emissions, do not work, are not ready, require massive subsidy, and perpetuate fossil fuels?
The O&G industry is soaking up massive subsidies — dollars that could be invested in real solutions (renewables, electrification, conservation, efficiency, public transit, home retrofits) instead.

Guilbeault is playing on his environmental credentials to deceive Canadians.

You forgot that Exxon finally

Who would have thought that having a former climate activist as climate change minister could be so tragic.

Oil and gas companies are

Oil and gas companies are like the cigarette companies in the way they deceive and mislead the public.

I've gotta agree with Pascoe Sabido.
Someone should tell Catherine McKenna the truth: aspirational statements is all it takes.
There needs to be a separation, as well, between "sustainable" and "climate sustainable."
Business thinks of sustainability as something they can continue to do, without jeopardizing profit growth. That's got nothing to do with climate sustainability.
Further, there are emissions we are powerless to change: people exhale CO2, their waste produces GWGs, pretty much no matter how handled, and numbers of people will continue to increase for a while yet before they level off. People need shelter, which comes with carbon expenditures. They need to get from point A to point B, which comes with carbon expenditures, one way or another. They need to communicate with one another, which comes with carbon expenditures.
Those are all relatively non-negotiable in terms of cutting to zero.

Guilbeaut can say what he likes, but the fact of the matter is the current government has been around now for 7 years, and there is not only no cap on emissions, but they're approving and financing new carbon-producing operations even now as we read and write.
I hope George Monbiot bent his ear at COP.