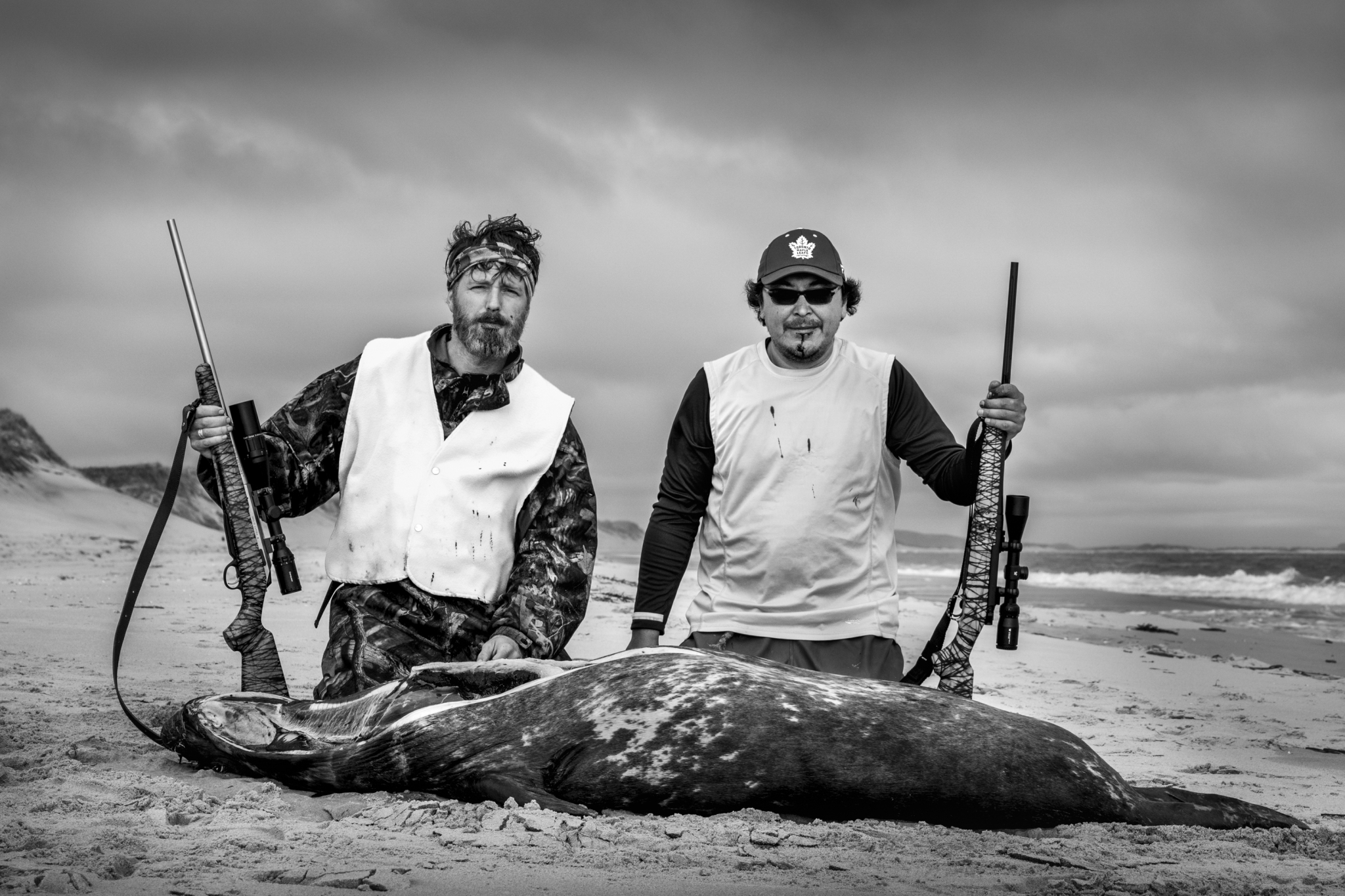 Yoanis Menge (left) and Ruben Komangapik with a seal they hunted. Reconseal hunts all year round, developing techniques for each season. Their harvests supply Inuit organizations in the South. Photo courtesy of Yoanis Menge
Previous story
Next story

Inuk hunter Rubin Komangapik and his hunting partner Yoanis Menge have hope that the worst is behind them.

The pair run Reconseal — a co-operative whose name is a play on reconciliation. Based out of the Magdalen Islands, Reconseal supplies southern Inuit organizations with seal meat and skin so urban Inuit can access seal skins and country foods, a term encompassing traditional staples such as seal meat, arctic char and caribou.

Along the way, the two hunters teach each other cross-cultural hunting techniques and trade worldviews.

“Country food, on the whole, is happiness for us,” Komangapik explained. “When we don’t eat our country food, we are eating empty, sad animals. When we eat country foods, we’re eating free, happy animals.

The sealing industry was rocked in 2009 by a European Union ban on seal products and an increasingly negative public perception of sealing in western markets, including Canada.

Sealing has been a target for many animal rights organizations like PETA, Greenpeace and the Humane Society, which have campaigned to ban commercial sealing outright, with exceptions for “subsistence hunting” for Indigenous communities. But since the Seal Summit that took place in St. John’s, Newfoundland on Nov. 8 and 9, focusing on the future of seals and sealing, the two have renewed hope for the sealing industry.

“We’re on the turning point now,” Menge said. “We see beautiful things in the future.”

The government of Canada and the Department of Fisheries and Oceans (DFO) are “completely committed” to supporting the sealing sector based on the best available science, Adwaite Tiwary, director of trade and international market access with DFO, told Canada’s National Observer.

Once controversial because of animal rights activists, Inuit sealers are hoping that a growing market can help sustain their livelihoods. #SealSummit

There is a strong market in Asia, in particular China, and Komangapik and Menge hope seal meat will eventually become a homegrown food staple.

But Tiwary acknowledges changing public perception of western seal markets remains a challenge, even in Canada. There are trade impediments and issues of “brand,” Tiwary said. Seal meat isn’t regularly sold in restaurants and shops, for example.

However, Komangapik says commercial hunting is subsistence-based for many Inuit sealers because without the commercial market, many sealers can’t afford the gas and equipment needed to hunt, especially in the North.

“We're in the year 2022, and the way I see the sealing industry, all of it is subsistence hunting now,” Komangapik said.

“We’re not living in igloos anymore, you know what I mean?”

Komangapik was reluctant to denigrate animal rights activism, but he said stop sealing activists have a different philosophy than people living on the land.

“They are loving the seal the wrong way,” Komangapik said.

There is an overpopulation problem with harp seals that impacts their ecosystem, according to the DFO. Seal populations have grown steadily since the mid-century. The harp seal population has grown from two million in the 1970s to 7.6 million in 2019, the largest in recorded history, according to a report from the DFO’s Atlantic Seal Task Team.

Adult harp seals can weigh up to 800 pounds, according to Komangapik, and they’re predators whose primary food source is fish. The seal task team report said in 2014 the total prey consumption was approximately 3.2 million metric tons. That same year, all commercial catches in Newfoundland and Labrador equalled 256,000 tons.

“There’s nothing bad with nature, there’s just imbalance,” he said.

Hunting seals is one way to feed the ocean and bring it back into balance, Komangapik said. It’s what Komangapik calls making a circle because humans are part of the life cycle, and we play an integral role in maintaining balance in the ocean ecosystem, which has seen seal numbers grow while fish populations decline exponentially.

“We’re a really intelligent creature and we should start thinking this way.”

Animal rights organizations maintain that seals are not overpopulated and that sealing is cruel, unnecessary and must be banned once and for all.

But Komangapik and Menge both agree it’s easy to separate human beings from nature when living in cities. It's an entirely different reality when someone is on the land.

“We are nature: that’s one thing we tend to forget just because we can turn on a light like turning on the sun,” Komangapik said.

— With files from Karyn Pugliese

A previous version of this article attributed statistics about the harp seal population to the Department of Fisheries and Oceans Canada (DFO). In reality, the attribution is to the Atlantic Seal Science Task Team, which is an independent research team operating at arm's length to the DFO.

Elon Musk’s war on the truth

Being connected to nature

Being connected to nature requires killing? Mmm, no. And killing for an international market is bottomless, clearly not what is usually meant as subsistence. As for purported overpopulation and threat to fish, lack of enforcement, stunning cruelty, readers may choose to read this article by the Humane Society: https://www.humanesociety.org/resources/about-canadian-seal-hunt

Bait and switch.
First, we are told that Reconseal "supplies southern Inuit organizations with seal meat and skin so urban Inuit can access seal skins and country foods". Who can argue against that?

Several paragraphs down, the real agenda is revealed. "The two have renewed hope for the sealing industry."
"The government of Canada and the Department of Fisheries and Oceans (DFO) are 'completely committed' to supporting the sealing sector based on the best available science."
"There is a strong market in Asia, in particular China…"

Under the guise of "reconciliation", the sealing industry is trying to resurrect itself. Hoping to re-create a global market for its "products".
As expected, DFO and the federal govt are in support. Making seals the scapegoat for collapsed fisheries. Deliberately confusing the commercial, industrial-scale seal hunt in the Gulf of St Lawrence and off Newfoundland with the traditional subsistence hunt of natives in the far North.

The sealing industry is taking a page out of the O&G industry's playbook. Use indigenous peoples as front men and play up "reconciliation" to push pipelines. Play on public sympathy for the plight of indigenous peoples and use them to create political leverage for industry.
Follow the money. A mere fraction of which will end up in indigenous pockets.

Thumbs down, for all the same

Thumbs down, for all the same reasons that an industrial-scale seal hunt was a bad idea the first time around.
The DFO is incapable of managing a species for conservation and industrial-scale slaughter at the same time.
There is nothing natural or traditional about industrial-scale slaughter of any species. The traditional Inuit way of life does not include snowmobiles, spotting scopes, or high-powered rifles. There is nothing traditional about killing wildlife for parts on an industrial scale for sale in the global market.
Tradition is not a rational argument. Just because you did something yesterday is not reason to keep doing it forever.
Nature predominantly takes the weak, the young and the old, and the sick. Hunters and trappers either kill indiscriminately or take the largest and strongest—thus, weakening the genetic pool.
Human beings are wreaking havoc on the planet. This is just more of the same.
96% of the seals killed are less than 3 months old. They are often killed right in front of their mothers.
Hunters with rifles often only wound the seals. The wounded seals often slip off the ice and into the water and drown.
When commercial seal hunters strip the pelt, they usually leave the carcass on the ice.
This cruelty is needless. There is no pressing reason to kill seals. Seals provide no essential products. Their pelts are luxury items.
Seals are wrongly blamed for the collapse of fisheries. Seals and fish have lived in balance for millennia. The problem is overfishing by humans and destruction of predators. Using one example of failed management to justify another.
The fact that there are still millions of seals means nothing. There used to be millions of cod, passenger pigeons, and buffalo. Wildlife populations can collapse suddenly.

Given today's human population of eight billion and rising—far beyond the limits of sustainability—we must ask whether natural ecosystems can sustain our increasing burden.
Wildlife already faces numerous threats: habitat loss, pollution, noise, invasive species, overfishing and overhunting, and the global trade in wildlife (parts). We have turned the Earth into an abattoir—and we are the butchers. The predictable result is the sixth mass extinction.

Our incessant predation is unsustainable, if not immoral. Wildlife is not human property. Wildlife is not ours to do with as we please. We need a new caring ethic for our fellow passengers on planet Earth.
Canada needs to build a sustainable, humane economy for the 21st century. Not soaked in blood or oil.

You did a great job, Geoffrey, of capturing pretty much all the points that I was going to say.

Well, I was pleasantly

Well, I was pleasantly surprised to read all of the comments prior to mine that pointed out all of the inaccuracies and green-washing that were contained in this article. Farley Mowat's book "Sea of Slaughter" also contains interesting information on the history of our species decimating fishing stock by industrial scale commercial fishing and then blaming the shortage on other species like seals.

Paul Watson also has several newer books out that detail our impact on fish and mammal species that live in this planet's oceans. The directors of the Sea Shepherd organization that Paul himself founded have recently changed it's directon from effective, direct, non-violent intervention to lobbying and education strategies, and have even banned him from using the name Sea Shepherd or any symbols representing it. Due to this betrayal of his original vision of Sea Shepherd, he has founded a new organization, the "Captain Paul Watson Foundation", and is currently raising funds to purchase ships and is recruiting volunteer crews to operate them to continue the important work that Sea Shepherd used to do under his guidance.

The DFO has been nothing but an apologist and willing accomplice of the commercial fishing, sealing, and whaling companies owned by large corporations.

There is no factual basis,

There is no factual basis, whatsoever, for these notions, "Hunting seals is one way to feed the ocean and bring it back into balance, Komangapik said. It’s what Komangapik calls making a circle because humans are part of the life cycle, and we play an integral role in maintaining balance in the ocean ecosystem, which has seen seal numbers grow while fish populations decline exponentially."

Killing seals does not 'feed the ocean.' All the declines in marine species are due to humans. The decline in fish populations is due to overfishing and pollution, not seals or any other living beings. People are the problem not seals. The only way for people to play an integral role in 'maintaining balance in the ocean ecosystem' is to end all harvesting, use, and consumption of all marine life. It's that simple.